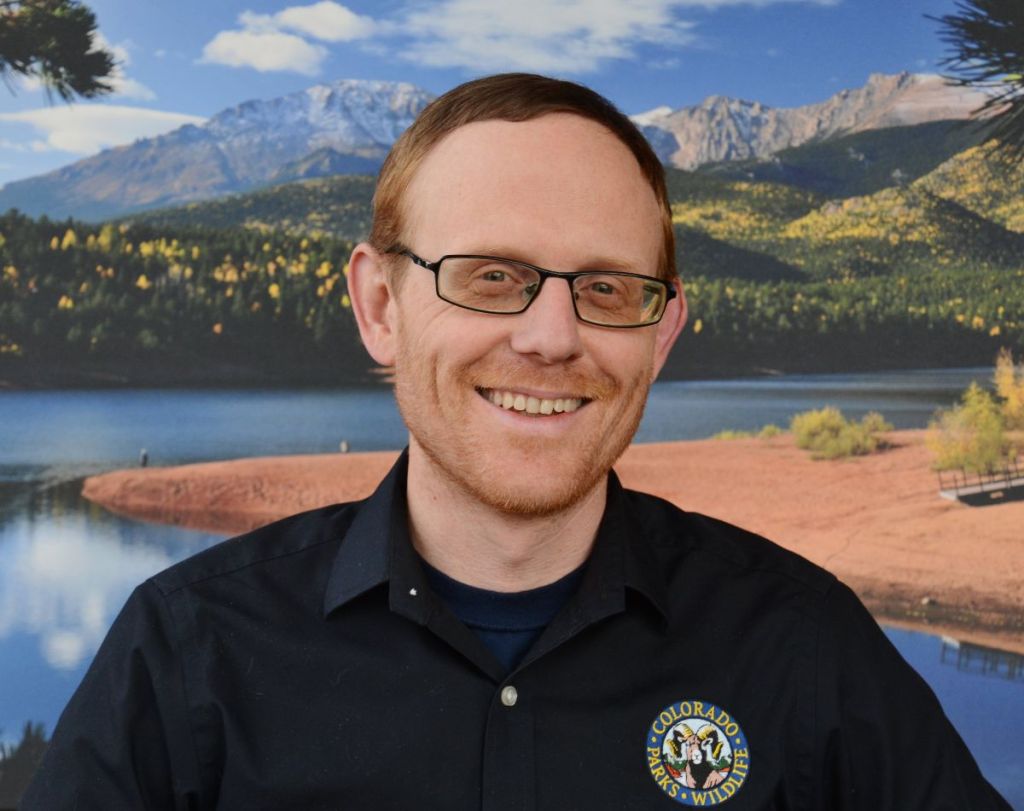 STAUNTON STATE PARK, Colorado – I was clinging to a cliff under a sky-blue September sky, trembling for my next stop when a voice from below called out, “You got that, T!”

It was Dominic Lucero, founder and CEO of Colorado Treks (COTREKS), who invited me to a climbing clinic event hosted by volunteer climbers in Staunton State Park. Lucero’s energy and encouragement were contagious; it was exactly what it took me to try and get a little higher on the climbing route.

Below me were a dozen COTREKS members, mostly Latinos like Lucero, ages 6 to early twenties, gathered at the base of the rock known as The Raven. Some were new like me. Some of them already knew the group from trips like a horse ride through the Flat Tops Wilderness earlier in the summer.

They joined Lucero and gave me courage. I used to watch most of them climb. I had wondered how brave so many of these children and young adults were, many of whom had never climbed before.

Lucero founded COTREKS in 2016 with a mission to instill life-changing trust in marginalized Colorado youth, families and communities through cultural experiences and outdoor educational walks.

I reached out to Lucero after learning of his nature diversification efforts and what he calls “the racially and economically segregated outskirts of Colorado.”

Lucero said he doesn’t usually see minorities relaxing in state parks, and he wants to change that by bringing kids from Metro Denver to the Colorado highlands.

“Growing up, I had access to the great outdoors because my uncle was the creator of the outdoor recreation program for Denver Parks and Recreation,” said Lucero. “But transportation can be a barrier for many (minority) people, and space is so racist. That’s why I say the hardest part is showing up.

“My family, my friends, my community trust me to take them to these rooms.”

They trust him very much when he puts them in helmets and harnesses, ties them to long ropes and lures them to steep cliffs in Staunton. Not only does he introduce his group to the great outdoors, he also immerses them in adventures in the wild, hoping to spark a passion that will bring them back with their families and friends.

“I teach Chicano studies and we introduce these spaces and how they affect the communities they serve,” Lucero said. “We understand that nature has been a racist space for hundreds of years. Once fences are in place, not everyone has equal opportunities to reap the benefits of medicine that the mountains have to offer. “

Lucero got involved with Staunton after an early COTREKS trip there resulted in positive interactions with park staff.

Jessica King is a seasonal ranger at Staunton State Park who helps direct and conduct climbing events. King worked with Lucero to reach a special activity agreement to run outdoor programs for COTREKS.

“Dominic and I had a phone call together and we began to work together to clarify the details of what COTREKS events in Staunton might look like,” said King. “The events are typically filled with closely related family units that no one has climbed before. The participants begin hesitantly, unsure whether they can conquer the rock in front of them. They trust us and realize that they can do a lot more than they thought. “

Climbing September 25th was the third event COTREKS held in Staunton, and King said the park has some special activity arrangements with other groups who visit the park as well.

“Depending on how many volunteer instructors we have registered, we can take anywhere from 15 to 30 people to climb,” said King. “At these events, the group learns the functionality of the equipment and how to use it properly when climbing: essential knots; Introduction to body movement on the rock in terms of hand and foot positioning; lowering posture; Security technology; and understand the risks associated with climbing. “

But for King, it’s not just about teaching these groups to be safe on a cliff.

“We strive to empower diverse communities in confidence in their abilities,” said King. “We show them that nature is a welcoming, safe and fun place for them.”

When I was being secured (lowered) down the cliff by one of Staunton’s volunteer climbers, I ended up next to 17-year-old Kaylee Chacon, who was climbing halfway next to mine for the first time.

She struggled with the critical concept of “trusting the rope”. Climbers have to lean back comfortably in the harness and place their feet flat against the wall in front of them when lowering.

I did my best to show her how to change her posture. It was a fun feeling to go from being encouraged so quickly to the person who encourages others.

It is precisely this feeling that Lucero cultivates in COTREKS.

While their friends were climbing, I spoke to some of the attendees about why they’d like to come to COTREKS. It was the second time Natalia Ramirez, 21, climbed with the group in Staunton and she almost made it up a route up the right side of the wall.

“The first trip gave me confidence,” she said. “I made it to the top and now I feel invincible, like I could climb anything. I am a spider monkey. I was up at 5 a.m. this morning, ready to go. “

Alan Prehmus has been a volunteer in Staunton for four years and has been climbing for more than 40 years. He helped develop many routes in the park, including The Raven. Throughout the day, he gave our group great tips on climbing, places to find a good grip, and other tips.

He showed me a great place near the top of the raven where I could snap some photos of Natalia as she neared the end of the route.

“It’s fun climbing for me, but I’ve been climbing for 40 years,” Prehmus told me as we watched Natalia approach the rock face. “It’s a lot more fun to take kids with you and teach them to climb. Here it is for me. “

At the end of the day, Lucero gathered everyone for a check-in in a circle to allow everyone to speak about their intentions and implications.

“A lot of us might intend something, but the effects are completely different,” said Lucero. “My intention is to create space and break down barriers. Is that the effect I had at the end of the day? “

Park ranger King was one of the last to speak.

“It’s a dream that Dom and I share,” she said. “My part in doing this is creating a space for people who may not be comfortable here, and letting you know that this is a place to take in those good vibes, to grasp those good feelings, and to make your connections with each other and to strengthen with new people.

“And also to find a part of yourself that you don’t know is there. Based on the amount of time I was able to spend with you today, I would say that it was done. I’ve seen how many of you trust us and each other, the person on your rope who literally holds your rope and your life in your hands. “

When it was my turn, I thanked everyone for welcoming me and making me part of the COTREKS adventure. Today I was the outsider and received like a friend. As a Caucasian, I had never seen our parks through this lens.

I know the discrimination is there, I just don’t see it that much because it’s not directed against me. Dominic and the COTREKS children made me see our parks differently. I was wondering what CPW can do as an agency to be more hospitable?

I don’t have the answers, but Dominic’s system of gathering his group in a circle before and after the outings seemed like a pretty good method of making sure everyone had a voice and opportunity to talk about their intentions and implications in the open air speak.

CPW is committed to representing the passion of people of all races, ethnicities, skills, and experience levels for outdoor recreation and natural resource conservation by highlighting your history and mission to diversify our outdoor spaces. If you have a story you’d like to share, contact me at [email protected]

How you can Discover Nature in a Metropolis

Grateful for what now we have for recreation

Lengthy-term tenting to be restricted at Colbert Alloys Park | Native...

The Alliance Out of doors Group will create extra jobs in...