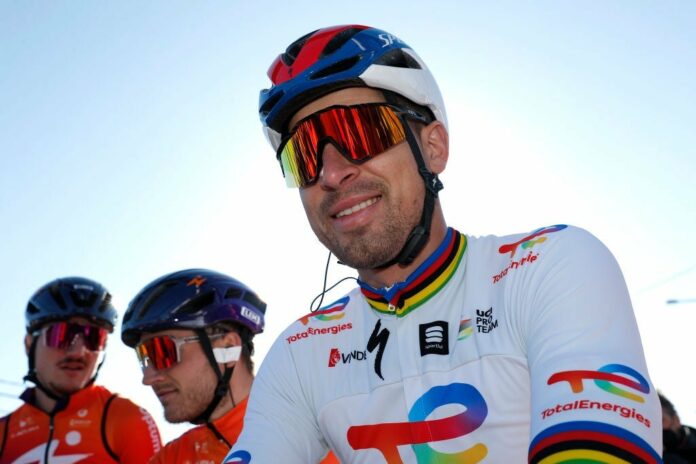 It is a familiar refrain from many riders as they get older that the younger members of the bunch lack a certain amount of respect for others, and the 32-year-old Sagan recently criticized the latest generation of youngsters for it.

In an interview with Belgian newspaper Het Nieuwsblad, the Slovakian former world champion described how riders no longer pull out of the pack to take a comfort break, even when the action is not on.

“The bathroom break just doesn’t exist anymore. I saw it again in the Haut Var. You used to have the fixed time to stop to pee together,” Sagan told Het Nieuwsblad.

“Now everyone is peeing from their bicycles. I then ask: Is that normal? I understand if you ride the final of say the Tour of Flanders or Paris-Roubaix. But at a dead-end in the race? You don’t lose anything by stopping for a while.”

Sagan goes on to bemoan riders effectively urinating on one another, and that some are no longer slowing to allow the race leader to have a nature break.

“They don’t even bother going to the edge of the road. No names, but they just piss in the middle of the pack,” he said. “I first noticed it when as a leader in a stage race I stopped to pee. They kept on attacking, while that used to be a moment of rest in the peloton.

“Everyone pees on everyone, nasty. And if you say something about it, you’re arrogant, so to speak, because you can’t decide what someone else should do.”

It’s not the first time that Sagan — a professional since 2010 — has decried a supposed lack of respect in the bunch. In interviews, in 2015 and 2018, he spoke of riders “only thinking about themselves.”

Sagan told Het Nieuwsblad at the Belgian “opening weekend” last week, that there was “total anarchy” in the peloton, with many of cycling’s unwritten rules largely ignored.

“Fabian Cancellara used to say a lot of things about me, very provocative, especially for the classics,” Sagan said.

“It always made me laugh because it just meant he was getting really nervous about me. When the journalists came to me with his statements, I always replied: ‘Fabian is my idol. I can’t say anything bad about him.’

“Back then it was the older riders who talked a lot, now the younger generation does, too. Then I think, okay, you are strong, a champ, whatever. But you are younger. The younger generation lacks that respect. You see, you feel that. In the past, you had the unwritten rules in the race. Now, forget it. There is total anarchy there.”

Climbing Packs and Luggage For Sale

Authorities businesses be part of outside recreation settlement