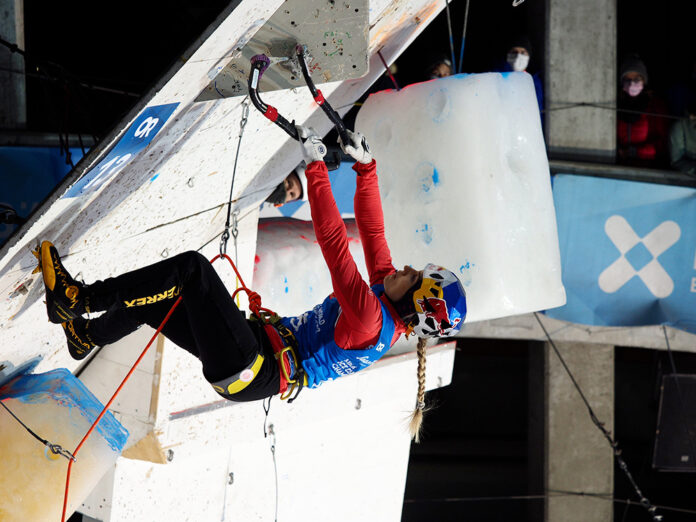 The warm welcome given last weekend by the spectators in some ways mitigated the intense cold of the Saas Fee Ice Dome, better known as “the coldest car park in the world”, which hosted the Ice Climbing Speed and Lead World Championships. The most important event of the season proved exciting and the athletes demonstrated great skill on the routes that were anything but easy.

In the Lead competition it was 2016 Boulder World Champion Petra Klingler who stole the show, making the only top in the women’s final, ahead of Russia’s Anastasiia Astakhova, second, and her teammate Franziska Schönbächler, third.

In the men’s comp 21-year-old Frenchman Louna Ladevant climbed flawlessly, clinching the only top of the grueling men’s final. The fact that he matched his ice axes seconds after the buzzer was just a minor detail as second-placed Benjamin Bosshard had fallen a meter lower to win silver. Bronze went to Tristan Ladevant, Louna’s elder brother. The final scene of the 2020 World Championship – the two brothers hugging each other in joy and disbelief – was memorable.

The Outdoors Information to Snowboarding

BLM kicks off Nice Outside Month with two acquisitions via the...

The Gear Our Editors Liked in June