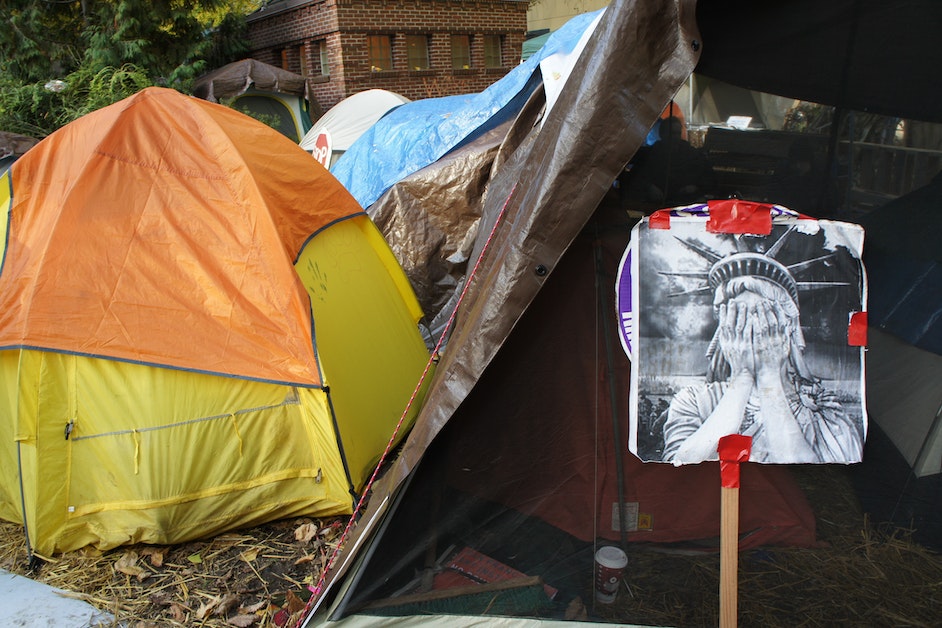 Last night the City Council in Portland, Oregon, approved a proposal to ban homeless camping. The plan would create city-sanctioned campgrounds and then enforce a ban on people camping elsewhere, on sidewalks, in parks and other public areas.

This interview has been edited for clarity.

Kim Malcolm: The Council discussed the ban and related issues before voting yesterday. Tell us what happened.

Rebekah Ellis: Yesterday’s council meeting really was a chance for the five council members to make changes to the plan. The biggest change came from Commissioner Carmen Rubio. She proposed an amendment to the package calling for six camps with a maximum size of 250 people each. There were many homeless providers in the city who said camps of 500 people, the original plan, could become very unruly and unsafe. She got the council to board for these camps with a smaller cap size. Then the council voted and all five resolutions were passed.

Only one council member voted against. Who was it and why did they vote against it?

That was Commissioner Jo Ann Hardesty. She voted against the most controversial resolution to actually ban outdoor camping in Portland. She is considered the most progressive member of the Council. Here’s what she said as she threw her no-note:

“To say that in 18 months we will magically wave a magic wand and there will be no more street camping is not real. These resolutions contain no code changes, do not identify funding or land, and have no agreements between jurisdictional partners.”

She also called the resolution inhumane and said she could not bring herself to vote yes.

It is also questionable whether this plan will stand up in court or not.

The Oregon ACLU yesterday morning sent a legal notice to the city council saying there was a good chance the proposal would fight a case called Martin v. violate Boise. It is that said municipalities cannot ban outdoor camping unless there are sufficient shelters for people to go to. The city hopes to build enough emergency shelters so they don’t violate the law.

The people this would impact most immediately, people who live outdoors, had a separate meeting earlier this week with Mayor and Commissioner Dan Ryan, who proposed the plan. How did that go?

Most of them said they thought it was a terrible idea. They said they believed the resolutions would effectively criminalize homelessness and punish the city’s poorest people who had nowhere else to go. They feared that the plan would essentially turn these camps into one big tent city, and with all those people crammed together, it could quickly become unsafe. Some even compare them to internment camps. A lot of people said look, the idea of ​​creating new shelters is great, but they have to be smaller, maybe 30 to 40 people. That obviously didn’t happen.

This package is now passed. How do proponents of this plan feel about it at this point?

I think they’re kind of cautiously optimistic. I think there are a lot of people who aren’t very confident that the city can pull this off. As I mentioned earlier, in order for the city to ban camping, it would actually have to build enough shelters to accommodate everyone, and that’s a really big if. But these backers think it’s a good goal. Many of these people, many of the residents they host, say that when these tents block the sidewalks, people with severe acute mental health crises standing in the middle of the street and nobody helping them, they are just at their wits’ end. They hope this could actually be a good thing, taking people on the street to places with services while also cleaning up the city.

So what’s the schedule here? What’s next in this plan?

Even though all five resolutions have been passed, much still needs to happen before this vision can become a reality. The plan is very expensive and most of it will have to be funded by other agencies, Multnomah County, state legislatures and the federal government. The city’s Budget Office says the campgrounds alone could cost anywhere from $3 million to $6.8 million. The cost of building the affordable housing units the city plans to build as part of this plan could be $9.8 billion. Of course, the city does not finance this alone.

You’ll also need to find land to actually build these large locations, which really isn’t going to be an easy task. There are many Portlanders who just don’t want a large homeless camp built next to them, no matter how well maintained. I would say the next step really is for the Council to try to nail down the things that it needs – money, support, land – to make this plan a reality.

Listen to the interview by clicking the play button above.

The Gear We’re Most Excited About for Subsequent Summer season