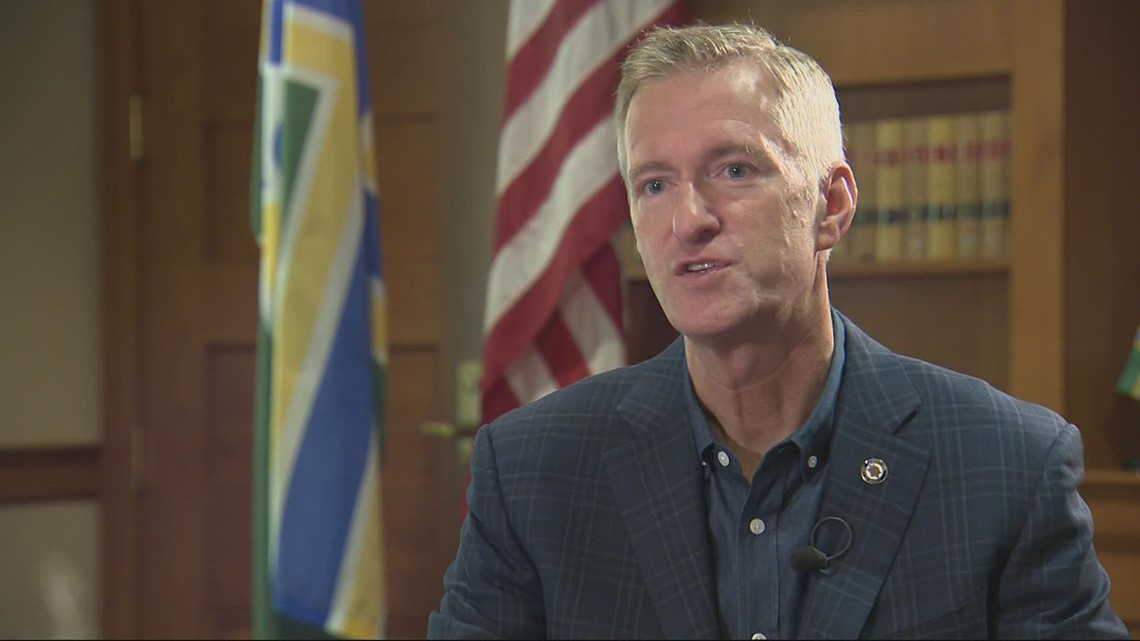 PORTLAND, Ore. – After the school was back up and running for Portland students, KGW reached out to Mayor Ted Wheeler about its new emergency declaration to ban the homeless from camping near school grounds.

The ban came into effect about two weeks ago. Since then, the city’s impact reduction teams have removed 50 homeless encampments near schools. They also referred seven people to addiction treatment centers, and 350 people have since gone to shelters.

Mayor Wheeler said he knows the city still has a long way to go, but student safety is a top priority for him and his administration.

He sat down for a one-on-one interview with KGW reporter Blair Best to provide an update on the city’s progress. Here is part of the 18-minute interview:

Mayor Wheeler: “The executive directive leading to the clearing of safe routes to school has gone very well. We cleared about 50 camps. That started in mid-August and by and large we haven’t had any problems.”

Blair Best, KGW reporter: “How does the city enforce that people don’t come in right behind them and camp in the same spot near the schools?”

Wheelers: “We expect that to happen. One thing we’ve learned is that once we’ve cleared an area, people usually come back, although there’s no right to return. But this is really about sitting down and explaining one on one with individuals. We’re not telling them they can’t camp in the city of Portland. In this case, we tell them that there are very specific reasons why they can’t camp safely on the way to school. This has to do with health, this has to do with the safety of our children, and the vast majority of people understand and comply with that.”

Wheelers: “Well, we have to combine those two things, right? The reality is we always expect people to protest or push back or for some people to come back. But again this is based on the reality that children move around in camps by running into traffic to get around in camps. This is not safe for the children and when we sit down and explain to the campers why we are specifically taking them from this safe path to the school corridors, the vast majority understands. For those who protest, we will go back. We will rebook, we will explain again, we will provide services to these people – accommodation, transport, storage for their belongings.”

Preferably: “The reality is there are people who are in these places and this process that you just explained is so lengthy. It takes time. Not sure what the staffing is like to be at all of these campgrounds. So it’s not an overnight fix, and these neighborhoods have people who don’t feel safe.”

Wheelers: “Yes, and that is why I issued these executive directives – the first in high risk corridors. That is why we have established the Road Services Coordination Center to ensure all our city offices are working together to remediate the most problematic camps.”

Best said many Portlanders have lost confidence in the city’s response to this crisis. Wheeler replied that he was not surprised.

Wheelers: “After four years of terrible focus on what is clearly a humanitarian crisis on our streets, I totally understand. Look, I live here, my kid goes to school here, I shop here, I go to bars and restaurants around town from Portland. I hear it all day. I hear it from early in the morning until late at night. I get the emails, I get the texts, I get the cat calls, I get people approaching me all the time. I understand the frustration and I think I share it, but we’re making progress.”

Preferably: “Part of that frustration is just the number of phone calls and emails people are sending about PDX Reporter by calling 311. It sometimes takes hundreds of calls and months to get even one answer from someone on the other end. Why is that?”

Wheelers: “Yeah, so here I think we need to improve it. I still strongly encourage people to ask to still call non-emergency 311 or use the PDX Reporter app’s Portland Reporter to have data collected. Last week alone we received 3,140 camping complaints. We get this information. It is prioritized. All camps are visited and assessed by our impact reduction teams, and those most critical to public safety, public health and environmental concerns are sanitized. And for data to be used. I think where we could be better is in responding to people and letting them know how that data is being used.”

He said staffing shortages prevent them from responding to every report, leaving many unanswered.

Wheelers: “We’re not set up to address these kinds of major social issues, but we’re scaling up quickly and providing people with the resources and human resources that we need.”

He said the city is investing money in building new infrastructure to help deal with the homeless crisis.

Preferably: “What do you answer the people who have lived here for 10 to 20 years and are now moving? They say they gave up Portland and are selling their homes and moving away because they don’t see the future you’re talking about.”

Wheelers: “They sell at the bottom. I would strongly advise against it if they’ve stayed this long to the point where we haven’t installed those programs and infrastructure. We’re starting to see the positive results. This is not the time to pack up and quit. I want people to work with us and not get angry and leave. Fine, get mad at me, yell at me, but work with me.”

Many argue that it’s difficult to work with the city if there aren’t enough staff to answer their calls and emails. Despite all of this, Mayor Wheeler said the city is taking a turn and is encouraging people to go downtown and see for themselves.