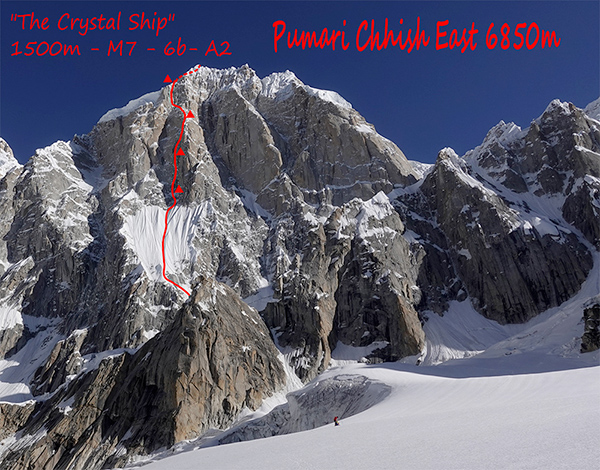 From the 25th to the 29th June Christophe Ogier, Victor Saucede and myself managed the first ascent of Pumari Chhish East (6850m circa), via a direct route up the south face.

Pumari Chhish East is located off the Hispar glacier and is surrounded by majestic 7000+ meter peaks. Its south face has three steep granite prows and its summit is crowned with gigantic snow mushrooms. Although there have been many attempts, most have been thwarted by terrible weather or the fact that it is very difficult to find a safe route through this complex face.

After spending almost a month in base camp with Mussa and Suliman looking at the snow falling and trying to acclimatise, we finally got a good weather spell forecast by our weatherman Karl Gabl.

By that time we had spent many many hours looking at photos and debating possible lines. We had deduced that the lines that seemed more obvious were too exposed to falling debris from the crown of mushrooms high up on the mountain, and that only the steepest lies of the face would be protected. By climbing the initial snow slope at night we could reach the steep section when temperatures would rise.

Classically for the Karakoram, and even more so during these recent years, the good weather spells are accompanied by very high Temperatures as was witnessed last year on K2 for example. We figured though that we’d rather be forced to turn around because the climbing was too hard then because the mountain was falling apart on us. Also after a month of snow, the conditions were far from optimal, but at least we had good weather!

We started the ascent at 2 a.m and by the end of the day we were “on the wall”. The steep system of cracks that led to the shoulder took us 3 days to breach and offered a couple of poor bivies and one spectacular bivy on a snow mushroom. The pillar was very sustained with 20ish pitches of mixed climbing and usually some aid sections o pass thin cracks and overhanging sections.

The last pitches to access the shoulder were the most difficult and, anticipating this, we had brought rock shoes. Three pitches around 6b on steep, at times overhanging rock finally gave way to the shoulder where a last bivy and 250m of easy terrain led us to the summit.

Every night we thought we might reach dead end the next day or encounter sections that took too much time or that we could not pass. The snow mushrooms took a long time to clean and obviously some of them were too big to be climbed safely, so we had to make our way around them. With this in mind we were really happy to end up on the summit on the morning of the 29th! The GPS altimeter showed a height of 6820. Pumari Chhish Main and south, Kunyang Chhish, Yutmaru Sar, Yukshin Gardan Sar surrounded us in a spectacular setting. We then rapped the line and returned to ABC late that night.

We named the line “The Crystal Ship”, as this great prow was the vessel that crystallised our desires during our time at base camp, as well as it being a great song that all three of us enjoyed.

Valley Information – On the Trails: Take note of the hidden...

BIG 5 SPORTING GOODS CORP : Submission of Issues to a Vote...

Methods to repair a carabiner with a damaged gate – Half...