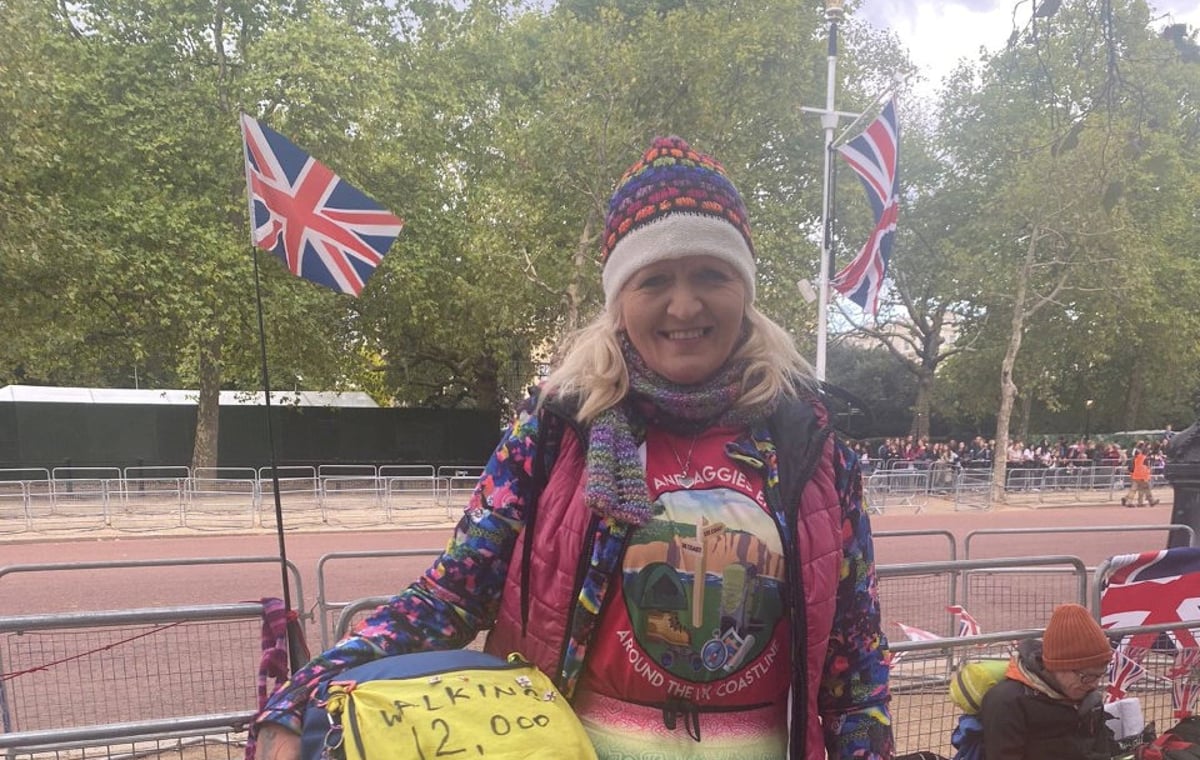 Thousands of people from around the world camped out on The Mall in central London to secure the best vantage points for the Queen’s State Funeral.

Former members of the armed forces rubbed shoulders with people from across Britain and the rest of the world as they slept on the streets.

Tracey Hannam, 55, had traveled from the Orkney Islands after breaking up a stroll on Britain’s coast to attend the funeral.

Tracey, from Bath, Somerset, began her epic coastal walk on 4th July 2020 and is due to finish in around two years.

Lesley Warren traveled to London with friends and family from her home in Sittingbourne on Saturday, her 51st birthday. Photo: SWNS

She said: “To get here I started in a lighthouse in the highest northern part of the Orkney Islands. From there I took a flight with just me and the pilot in an eight seater airplane.

“I then spent a night on a yacht owned by someone I met there. Then I took the ferry to Aberdeen and finally got a 12 hour bus arriving in London today.”

Now sitting outside the Mall with friends, she added: “I work a lot for the RNLI so it was important for me to be here as the Queen was a patron.”

After the funeral, Mrs. Hannam makes her way back north to continue her walk.

Darran May, 50, who served 10 years in the Welsh Guards, had come to say a final goodbye to his ‘Commander-in-Chief’.

He and his wife arrived at The Mall at 4am on Sunday morning from their home on the Isle of Sheppey, Kent.

Mr May said: “For the Welsh Guard I used to be Prince Charles’ mounted escort so I looked after his horse. It was fantastic to be with the royal family.

“If we were based in Windsor the Queen would always come by on a hot day and offer us cold drinks.

“It was like your grandma came over and checked on you and made sure you were okay.

“Of course you would never want to say yes!”

He added: “I came to say goodbye one last time. She was our supreme commander and she is just the size of Britain.”

According to Transport for London (TfL), one of the UK’s largest transport companies is expected to travel to the capital today with more than a million people.

Whilst a Kent monarch spent her birthday on The Mall to secure a prime seat for the occasion.

Lesley Warren traveled to London with friends and family from her home in Sittingbourne on Saturday, her 51st birthday.

Her friends presented her with a cake – complete with candles – and serenaded her with “Happy Birthday” along with other people camping out on the thoroughfare near Buckingham Palace.

Lesley said: “My friend Sandra bought me a cake and we lit candles last night. It was amazing, about 20 people came and sang Happy Birthday to me. It was very special.

“Buckingham Palace is not a bad place to spend your birthday!

Lesley also attended the funeral of Diana, Princess of Wales, the Diamond Jubilee, as well as William and Kate’s wedding.

She is camping with her daughter Victoria Warren, granddaughter Darci May and friend Sandra Brabbs, who she met when she arrived for the Queen’s Diamond Jubilee.

Sandra, 48, from Yeovil, Somerset, who bought the cake, said: “I had a nightmare when I dropped the first cake I bought on the floor before I got here so I had to get a replacement!

“Luckily I got a new one because it was such a special moment celebrating with all these people.”

Among the crowds in the Mall was Katrina Montgomery, 29, from Belfast, who arrived in London with her family at 7pm on Saturday to pay her respects.

She said: “It was fine during the day but it got quite cold at night.

“Luckily, the St. John’s Ambulance volunteers gave out foil blankets, which really helped. It’s a once in a lifetime experience and I just wanted to be part of the story.

“The Mall is one of the best places to see that.”

She added: “The atmosphere in Belfast was fantastic.

“The Queen is so important to all of us because she’s always been so dedicated. It has always been the heart of Northern Ireland.”

A Devon couple canceled the London hotel they had booked for the funeral at the last minute so they could camp in the mall instead.

Bev Ryland, 66, said: “When we got here we realized we had to stay and see the funeral up close.”

Her husband Mark Ryland, 68, said: “We came here because of our two-year-old grandson.

“We would love for him to tell his friends that his grandparents were there. Just as I can say my parents were at the Queen’s coronation.”

Bev added: “It was great, we met so many people here.

Former soldier Jeff York, 68, from London, was keen to camp out to pay his respects.

He’s been camping out on the Mall since last Friday.

He said: “We have a lot more army comrades coming to us later. Luckily we have tents so we were able to stay warm but the temperature has dropped over the past few days.

“We have to take down the tent at 7 a.m. We also have sleeping bags so it was fine. I feel sorry for those who only sleep on chairs.

“I came with friends but I met so many people along the way, it was great.

“There is a really great atmosphere here. We made tea and chatted all day.

“And the police were excellent. They keep coming up to us to chat and joke, it was great.

“I’m not looking forward to tomorrow, but I’m glad I’m here. It will be very sad to say goodbye.”