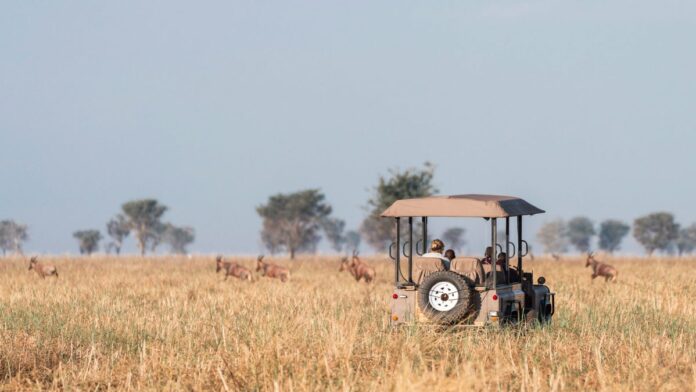 From far-flung expeditions to deep fireside chats, travel has the power to change us. When done well, it can also positively change the places we visit—a fact I learned during a recent safari in southern Tanzania.

As a wildlife enthusiast, I often plan my trips around local fauna. Sure, I follow responsible wildlife tourism guidelines, but cruising around in a safari Jeep doesn’t necessarily help the animals, or ecosystems, I’ve come to admire. Getting my hands dirty installing camera traps to assist researchers studying wildlife in an uncharted and once highly hunted stretch of southern Tanzania? That’s a bit more like it.

And this, it turns out, is part of a growing trend of the 2020s: regenerative travel. The idea is to go beyond sustainability, which focuses on minimizing negative impact, and instead have a net positive impact on the place you’re visiting.

During my trip to southern Tanzania’s new Usangu Expedition Camp by safari company Asilia, this meant installing and monitoring camera traps and snapping then uploading animal photos to citizen-science database iNaturalist to help researchers benchmark and monitor local wildlife populations; guests can also assist with collaring programs to track the movements of big cats. These experiences felt even more enriching than a traditional Jeep safari, and they contributed to Usangu’s goal: helping conservationists from partner organizations, such as the Tanzania Wildlife Research Institute, better protect this under-studied ecosystem.

Usangu is one of a growing number of experiences allowing globe-trotters to leave a positive footprint. Given community and environmental strains from the last decade of uncapped (and largely uncontrolled) tourism growth, plus a jet-setting resurgence after the pandemic, this shift couldn’t come at a better time.

“Tourism took a bad [hit] during Covid from a reputation point of view; regenerative travel is a way to rebuild the brand of tourism,” says African Leadership University’s School of Wildlife Conservation research director Sue Snyman, noting this is particularly important for engaging local residents. Years of negative tourism impacts have left some communities wondering why they’d want tourism to begin with. “If communities see travelers having a genuine positive impact, they’ll understand [what tourism can do].”

With overtourism pressures mounting in Moab,  Sedona, and Big Sur—just to name a few—more of us are understanding the complex impact of too many visitors on beloved environments.

In June 2020, six responsible-travel groups, including the Center for Responsible Travel and the Global Sustainable Tourism Council, joined forces to reshape tourism for the better. The result: the Future of Tourism Coalition, which calls on industry organizations to follow 13 guiding principles.

Some of these guidelines follow a more traditional sustainability model, like reducing emissions. Others align with the regenerative ethos, such as demanding that local communities receive fair income from tourism, and creating experiences that support artists, farmers, guides, and chefs working to preserve and protect their local culture.

When The New York Times first reported on the regenerative travel trend in August 2020, around 20 travel groups had pledged to support these principles. Now, more than 600 organizations have signed on; the coalition is also co-hosting its first in-person summit this fall.

While exciting, this shift toward more equitable and responsible excursions is long overdue. According to Planeterra, a nonprofit that aids community-based initiatives around the world, the tourism industry generates some $8 trillion globally, yet local communities hardly receive a fraction, if any, of it.

The Future of Tourism Coalition principles benefit the community and the jet-setter, says Planeterra president Jamie Sweeting. “When you help empower local people to run their own enterprises, where they’re the ones hosting you in their village or community, you feel like you’re part of something bigger than just ‘I’m here having a great holiday.’”

The concept makes sense, but let’s be clear: we have a long way to go—especially after the economic blow of the pandemic. “Most tourism businesses had to really struggle for a couple of years. They have to be judicious about how they’re spending their money,” says Sweeting. For many travel companies, regenerative experiences aren’t the top priority. “But the consumer has way more power than they’ve ever had in the travel sector. Travel businesses will do what the travelers want, so if you want to make a difference, start asking for this kind of tourism.”

All too often, travel is consumptive, or in Sweeting’s words, “parasitic.” Visitors often take from communities—be it consuming resources (water use, for example, is a major tourism issue in Hawai’i), snapping photos for social media, or worsening crowds and congestion.

Advocates of responsible tourism have long encouraged globe trotters to hire community guides or stay in locally owned hotels instead of chains. The regenerative travel trend paves the way for even more positive impact.

Planeterra, founded in 2003, aids community enterprises through mentorship, networking, grants, and education. It works with G Adventures to connect travelers directly to businesses that need their support; examples include booking community-owned culinary experiences on trips to southern Africa and touring a women’s weaving co-op in Peru before trekking the Inca Trail.

“It’s all about equity and empowerment, and enabling communities to tell their stories, their history, and share their environment in their way,” says Sweeting, noting that in recent years, this model has led to some substantial local gains: employment opportunities for women, increased education access for youth, and revenue staying within communities. (Planeterra wants community businesses to generate $1 billion from global tourism by 2030.)

Other regenerative initiatives that have sprouted up include Mountain Homestays, a network that offers accommodations from Kenya to India largely owned and operated by Indigenous female entrepreneurs. One particularly unique spin-off, Astrostays, takes the Indigenous-owned accommodation further, with experiences centered on stargazing and culture in the Indian Himalayas. Astrostays launched in summer 2019; it’s already generated enough revenue to install greenhouses and solar-powered water heaters in local villages.

According to Snyman, who’s studied community-based tourism for decades, this approach can work, but it’s not foolproof. “Tourism is one of the most complex businesses in terms of business management, and yet, you’re expecting this community to now be a partner with the private sector who’s done it for 30 years,” she says, noting true capacity building within the community is critical. “People talk about equity partnerships, but for me, there’s nothing equitable in them when the power balance is skewed. There are good examples [of community tourism], but there’s still work to be done in the space of equitably engaging communities.”

One community-based tourism model that’s impressed Snyman is Namibia’s Damaraland Camp. It came to fruition when travel outfitter Wilderness Safaris launched a joint venture with the local community in Damaraland, located in the Huab River Valley, in 1996. At the time, unemployment here had reached nearly 100 percent and human-wildlife conflict was raging. This venture led to the creation of the 869,000-square-acre Torra Conservancy, a community-based program in which the local people own and operate Damaraland Camp. Wilderness Safaris and the conservancy share in both the benefits and risks. The initiative has also helped the local people view wildlife as a resource to protect, not poach.

Damaraland Camp highlights the full potential of regenerative travel; by supporting local people, travelers also support conservation. Minnesota-based nonprofit Indifly shows how the principle can apply to other types of tourism, such as angling.

Indifly helps Indigenous communities around the world create equitable ecotourism initiatives centered on fly fishing and conservation; all projects are 100 percent community-owned and operated. One of its latest projects, a community-owned eco lodge on Wyoming’s 2.2 million acre Wind River Indian Reservation, will generate critical economic opportunity for the Indigenous Eastern Shoshone and Northern Arapaho communities, where unemployment hovers around 70 percent.

The idea: build a sustainable economy where Indigenous communities both benefit from fly-fishing tourism and manage how visitors enjoy, and respect, these precious resources.

“[The waterways] will stay pristine as long as they’re protected. The minute you start overdoing it, you’re going to hurt them. The tribes, we do have the ability to protect that,” Darren Calhoun, an enrolled Northern Arapaho Tribe member, said in a film about the project by Indifly partner Yeti. In 1992, Calhoun and his father founded the 100 percent Native-owned outfitter Wind River Canyon Whitewater and Fly Fishing.

One reason fly fishing works so well? It’s lucrative. According to a 2021 report from the American Sportfishing Association, the U.S. fishing community alone generates an economic output of nearly $40 billion per year. “Anglers tend to spend more money than [many] other types of outdoor pursuits, and they’re willing to pay to travel to places that people don’t typically go,” said Matt Shilling, Indifly’s executive director.

“The challenge for us as a community is let’s [build upon this interest], but let’s make sure we’re the beneficiary,” Calhoun said in the Yeti film. “Let’s put our kids to work, let’s create businesses for our community.”

Increasingly, regenerative travel experiences are available for all types of outdoor activities. Scuba certified? Try trash diving or coral restoration. More into terrestrial excursions? Book a Sierra Club trip to help with trail maintenance or native species restoration in some of the country’s most scenic getaways.

Even small actions can have a big impact, especially in our increasingly visited national parks. According to Brittany Conklin of the Grand Canyon Conservancy, spending in GCC-run retail stores or participating in the park’s Field Institute classes directly fund trail updates, wildlife conservation, and habitat restoration.

The idea of regenerative travel may seem a bit Pollyanna-ish, or like traveling with rose-colored glasses, but Snyman says it can and does work. The key factor is how positive impact spreads beyond direct tourist activity or spending. When local workers receive fair payment, or community enterprises generate revenue, the community’s whole economic ecosystem can flourish.

“Often governments look specifically at the number of tourists and what they spend [as a sign of success], but one of the biggest benefits of staff getting paid is they can go into their communities and spend money,” says Snyman. “They employ other people to look after their children. They work in startup businesses and spend their money in the villages. That, to me, is regenerative.”

Out of doors rec. heart to exchange Glendale water park

Chatham County Parks and Recreation to host outside movie competition on...

Stillhouse Is the Official Spirit of Journey