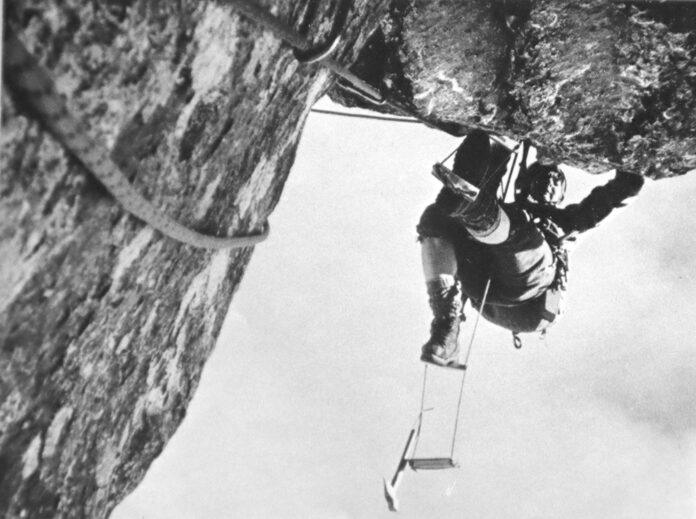 Claude Gardien, historic editor-in-chief of the French magazine Vertical, remembers Simone Badier who passed away on 18 March 2022. Born in 1936 and as talented as she was discreet, she was one of the leading figures in women’s climbing and mountaineering.

In 1969 I started climbing on the limestone cliffs of Burgundy where I lived. My “teachers on the rocks” told me about a woman who led a lot of difficult routes in the French ranges of the Vercors and Chartreuse, as well as in the Dolomites. At that time, there were not a lot of women who climbed those routes, and they certainly did not lead them. Simone Badier enjoyed our Burgundy crags and I met her one year later at Fixin, a nice cliff near my home, just above the beautiful village.

Simone was a small, smiling woman with shining eyes, and it was immediately obvious that climbing brought her great joy. During her childhood she had devoted herself to her studies and when she discovered climbing at Fontainebleau, she already worked as a physics teacher at the University of Amiens. She soon climbed at a high level, even though she often said she was not a particularly gifted climber.

In 1966, when she was thirty, she travelled to the Dolomites together with Daniel Joye, a very good climber who quickly decided to let her take the lead, as he often used to climb off-route… But he was a fast climber and Simone was happy to share the rope with such a friend! Daniel was always joyful and highly appreciated by his peers.

The team returned to France having repeated routes such as Via Carlesso on Torre Trieste, Via Livanos on Cima Su Alto and Hasse – Brandler on Cima Grande di Lavaredo… On the way back home, they stopped off at Chamonix to climb the East Face of Grand Capucin, via the famous Bonatti Route.

Nicknamed “Momone”, she spent a lot of time in the mountains. Having done many classic routes in the Mont Blanc range in 1968, she was now ready to attempt the most famous ascents of the Alps. She was also always motivated to climb, even the day after another big route. During the summer of 1969 for instance, she climbed the Andrich-Fae on Punta Civetta and then, the next day, the Philipp-Flamm! The weather was threatening, but she and Daniel decided to do a reconnaissance: “It will be useful tomorrow” they thought… The weather improved and they finished the climb.

Back at the Tissi Refuge, an old man approached them as he had observed them climbing so fast. He was amazed as he thought they had swapped their clothes: he had seen the leader wear a blue jacket, and Simone had a blue one, while Daniel’s was red… She replied that she wore her blue jacket throughout the whole ascent. The old man was blown away: “I watched a climber leading the Philipp-Flamm route without knowing it was a woman!” The old man was Vittorio Varale, the famous Italian journalist who wrote so many stories about the “sestogrado” in the 1930’s.

Momone climbed most of the great routes of the Mont-Blanc Range: the Walker Spur and Croz Spur on the north face of Grandes Jorasses, the Central Pillar of Frêney, the Hemming-Robbins on the west face of Petit Dru, and so on… In 1973 she led the first female ascent of the south face of Aiguille du Fou via the Harlin-Hemming-Frost-Fulton (1963), the most difficult climb of that era, together with Thierry Leroy, at the time a not particularly experienced young alpinist… He was destined to make fast progress!

Momone later travelled around the world: in Yosemite (where she climbed The Nose on El Capitan with the famous Jean-Claude Droyer), Hoggar, Karakoram, Cameroon, Mali, Mt Kenya… where she sometimes pioneered new routes. In the 1990’s, she established new rock climbs in the Mont Blanc massif with Jean-Luc Amstutz and Romain Vogler.

Simone Badier never became famous: she did not want to. She was a true amateur. Most of the books that talk about female climbing forget to mention her… She seldom wrote articles, but in 2008 published the book “La dame de pic”. The title, Queen of Spades, is a play on words; Pic means summit, while Pique means Spades in French, and the Queen of cards is la Dame. In this pleasant book she talks about her youth and her climbing career, but also about her happiness in the mountains. She also clearly explains how the mountains, alpinism and climbing can be an highly enjoyable life style.

Towards the end of her life she could not climb anymore, having experienced several health problems, but she always fondly remembered her numerous ascents. Earlier she had written: “It’s in the mountains that I learned to love life… The joys I experienced there, I could not feel them anywhere else.”

Momone left us on the 18th March 2022, discreetly, just like she had lived her life. She was one of the most important figures of female climbing, but she did not care. She only wanted to be an alpinist and a physicist, and did not want to be known as a woman who climbs and who teaches physics. Her story remains unknown to many climbers, although it holds an important place in climbing and mountaineering history.

Out of doors recreation nonetheless a well-liked selection | Information |...