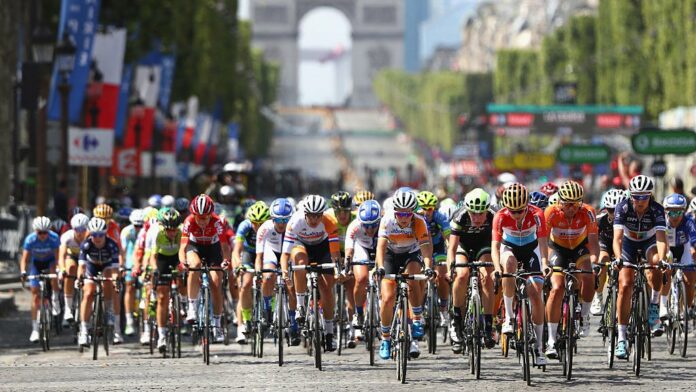 On Sunday, for the first time in a very long time, there will be two pelotons in Paris racing the Tour de France.

The Tour de France Femmes avec Zwift begins on July 24 and runs for eight days across northeast France. The race features 144 women from 24 teams, and it covers 640 total miles of racing. There are four flat stages, two hilly ones, and two mountain stages, with one finishing up the legendary La Super Planche des Belles Filles climb in the Vosges mountains.

Race organizer, sponsors, and media partners have promised that this will not be the first and last Tour de France Femmes. Presenting sponsor Zwift has pledged to back the race for at least four years, and fitness app Strava is in for three. NBC Sports signed a two-year deal to broadcast the race in the U.S. The long-term financial backing will hopefully help the Tour de France Femmes avoid the financial struggles that doomed previous attempts to build a viable women’s Tour.

VeloNews reporters Sadhbh O’Shea and Betsy Welch will be following the Femmes throughout the entire race; read their content on VeloNews.com. You can also watch the race live on the Peacock app, which will feature two hours of live coverage each day.

The Route: Gravel, Mountains, and Flats

The route of the first Tour de France Femmes avec Zwift was always going to be heavily scrutinized, and the organizers knew it. However, they’ve pulled off a course that should give plenty of opportunities for different riders to claim victories and keep the GC battle open right until the final weekend.

Stage 1 kicks off at the Eiffel Tower, where the peloton will race 12 laps of the legendary circuit that ends at the Champs-Élysées. The stage is flat and fast—the women are anticipated to finish in around two hours, preceding the men’s arrival in the city.

In addition to bringing big crowds to the first day of the race, the 50-mile stage is a nod to the inaugural edition of La Course by le Tour de France, which was held in 2014 on a nearly identical parcours. Many fans would love to see history repeat itself on this stretch of road, and for Dutch phenom Marianne Vos to win on the Champs-Élysées.

Stage 2 begins in Meaux, just east of Paris. It’s another very flat route, but this 83-mile stage will suit the best sprinters in the peloton, with a predicted bunch sprint finish in Provins.

The climbing begins on stage 3 from Reims to Epernay. The 82-mile stage features four categorized climbs. The first punch comes just 13 miles after the start, while the remaining climbs are in the second half of the day.

The last categorized climb, Côte de Mutigny, comes after 73 miles, and while it is not long, the ascent averages a 12.2 percent grade. Separations in the peloton are likely here, and the final climb up Mont Bernon could also be decisive near the finish.

Stage 4 continues on the hilly trajectory of stage 3 and throws some dirt into the mix. After a fairly flat start with an intermediate sprint at 37 miles, the fun begins halfway through the day.

There are four gravel sectors ranging from one to three miles in length, totaling about eight miles of dirt roads. In between each of those sectors are five significant climbs—the first two, Côte de Celles-sur Ource and Côte du Val des Clos, are short and steep, with an average gradient of 8.8 percent. The Côte du Val Perdu is a four percent kicker six kilometers before the finish in Bar-sur-Aube.

Stage 5 is the longest day of the race at 108 miles, and it is also the longest stage thus far in a Women’s WorldTour race, topping the 105-mile stage 4 of the 2020 Giro Rosa. There are only three climbs of note, so the day might be one for a breakaway to make it to the line. There are 12 miles between the last climb over the Col du Haut du Bois and the finish, which is plenty of time to set up a bunch sprint to the finish.

There’s no rest for the weary, as stage 6 on Friday gets hilly again. It’s a roller-coaster of a route with four categorized climbs scattered along the way, and the the summit of the final one comes with just five miles remaining in the day. A bold rider who can climb and time trial could be first to the finish.

The Tour de France Femmes features its biggest climbs in the final two stages. Stage 7 will see riders summit the Petit Ballon, Col du Platzerwasel, and Grand Ballon, the highest point of the race at 4,300 feet in elevation. Petit Ballon is five miles long at a stout eight percent and only offers a brief reprieve before the four-mile climb up the Col du Platzerwasel.

After that, it’s up, up, and away for 13.5 km up the Grand Ballon, with the final six kilometers of the climb kicking up to 8.5 percent.

While La Super Planche des Belles Filles tends to grab all the attention, the five-mile ascent of Ballon d’Alsace will soften legs up before the final battle, so be sure to follow the race as it hits the early climbs of the day.

The Favorites: Annemiek van Vleuten Versus the World

It may be a little simplistic to define the GC battle at the first-ever Tour de France Femmes as a battle between Dutchwoman Annemiek van Vleuten and everyone else. But van Vleuten comes in as the overwhelming favorite. Van Vleuten recently took a dominating win at the Giro d’Italia Donne earlier this month, and she is one of only a few GC riders to tackle the Italian and French grand tours with victory in mind. A storyline to follow is how riders tho raced the Giro hold up in the Tour, when compared to those who skipped the Italian race to have fresher legs.

Italian star Elisa Longo Borghini (Trek-Segafredo) and Denmark’s Cecilie Uttrup Ludwig (FDJ-Suez-Futuroscope) also rode the Giro d’Italia Donne, but did it more for training than for victory, and both are ones to watch in France this coming week.

Among the riders to skip the Giro were Dutch ace Demi Vollering (SD Worx) and Polish climber Kasia Niewiadoma (Canyon-SRAM). Vollering is likely to be one of Van Vleuten’s toughest competitors.

Ought to Lael Wilcox’s Arizona Path FKT Include an Asterisk?

15 Nationwide Park Campsites to Add to Your Bucket Listing

Registration is open for this yr’s UIAA World Youth occasion in...