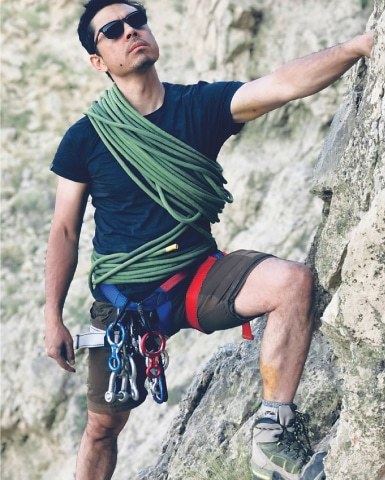 Climbing is arguably one of the toughest and most dangerous forms of extreme sports. Vertical mountain faces are climbed, often without seat belts and ropes. Imran Ali is a 36-year-old climber from Quetta who was recently notified after a social media video of him went viral. In the death defying video he can be seen climbing the mountain Char Shakh in Mari Abad. Ali belongs to the Hazara tribe in Balochistan who live in Mari Abad.

Ali says that Char Shakh (Four Peaks, approx. 3,200 m) is his favorite climb because he finds it the most demanding of all the peaks of Quetta. “Every time I climb there, a new challenge awaits me,” he says. For this reason, he also trained around 30 other climbers there.

The climber’s own vertical growth began when he was only 13 years old and was an eighth grade student. “You’re not very healthy at this age,” he admits. “Nothing scares you. You are daring They believe that there is nothing that you cannot do. Life in the mountainous surroundings of my city has also shaped me. “

Climbing not only requires strength, endurance, skill and surefootedness, but also the ability to make quick decisions – when you dangle halfway up a steep mountain face and only your feet and hands in nooks and crannies grab the rocks, the decision how to go Moving next can literally mean the difference between life and death.

Imran Ali is a climber from Quetta who believes that his extreme sport, with all its excitement, thrill and dangers, has tremendous reach in Pakistan, as so many mountain peaks are just here to try

Ali admits that unlike mountaineering, climbing may not be that exciting in popular perception. “In our country it is mountaineers that people look up to more. Films and documentaries also add to the glamor of mountaineering. The late Mohammad Ali Sadpara, Mirza Ali Baig, Samina Baig etc. have become household names. But there are also many other unsung heroes in climbing. They can also make a name for themselves for Pakistan if they become known for it, ”he says.

Ali obviously considers himself one of the unsung heroes. And maybe he’s right.

“When the American climber Alex Honnold single-handedly conquered one of the 3,000-meter-high Yosemite mountain peaks a few years ago, it took him a year and a half to just observe the peaks. After that, he did a full sketch and tried to climb, which resulted in him filming his progress along the way as well. But here I can’t even afford a camera like this to cover my climbing know-how, ”he says.

When asked whether the government provides facilities for climbers, he says that it has not yet “because our government does not even know such sports”.

Even so, Ali says he can train young people in fast climbing, which is also an Olympic sport.

“In fact, I was approached by some students from Islamabad and Lahore to teach them how to climb, but I could not comply with their request because I needed more equipment for their safety. And for that I need money, ”he says.

“That’s why I tried some of my links to reach the Ministry of Sports of the Province of Balochistan, and they asked me to climb some other mountains of Quetta, make a portfolio, and so on,” he says.

“I also reached out to a private brand that was promoting these kinds of sports in their advertisements and campaigns. I told them I would do live stunts for them too, but they weren’t interested because maybe I’m not as big a public figure as our mountaineers, ”he says.

However, given the skill required and the dangers of the sport, it is certainly not for everyone.

“There are people here who want to climb, but when they see me up close, they lose heart and go out again. It’s true that the chance of losing your life climbing is over 90 percent. You have to stay focused, ”he says.

When asked if he had international or local inspiration for solo climbing, Ali said that he admired David Lama, an Austrian free solo climber, very much. “He was lucky enough to get a lot of sponsorship and international recognition. That’s how I got to know him. I followed every one of his videos and interviews. Unfortunately, he and the two mountaineers Jess Roskelley and Hansjörg Auer lost their lives when they got caught in an avalanche on Howse Peak in the Waputik Range of the Canadian Rockies in 2019. The group had climbed a new route on the east face of Howse Peak, one of Canada’s most challenging rock and ice walls, ”he says.

Ali says he gave his name and number to all of the local mountaineers and climbers he knows. “I would like to offer you my climbing and rescue service. I have rescued many climbers in this area who got stuck in the mountains. Climbers do that.

“I still remember when a local fell into a hole in the mountains. Fortunately, my younger brother was on this team and called me to save the boy. I went down to get him with my ropes. He was badly injured, but I had my first aid kit with me, which helped me a bit until I raised him, ”he says.

About his plans for the future, Ali says: “I will climb a steep 300 meter high mountain in the Char Shakh Mountains. I asked a friend to come with me and make a drone video of my ascent because the beauty of this sport can only be shown through a drone camera, ”he smiles.

“My goal is to use my climbing techniques to climb the summits K-2, G1, G2 and Nanga Parbat. I know everything I need for this, but due to the lack of financial support, I cannot imagine that in the foreseeable future, ”he sighs.

Yellowstone Entrances & Gateways – Which One Ought to I Take?

Daylight Saving Time Might Be Right here to Keep. We Talk...