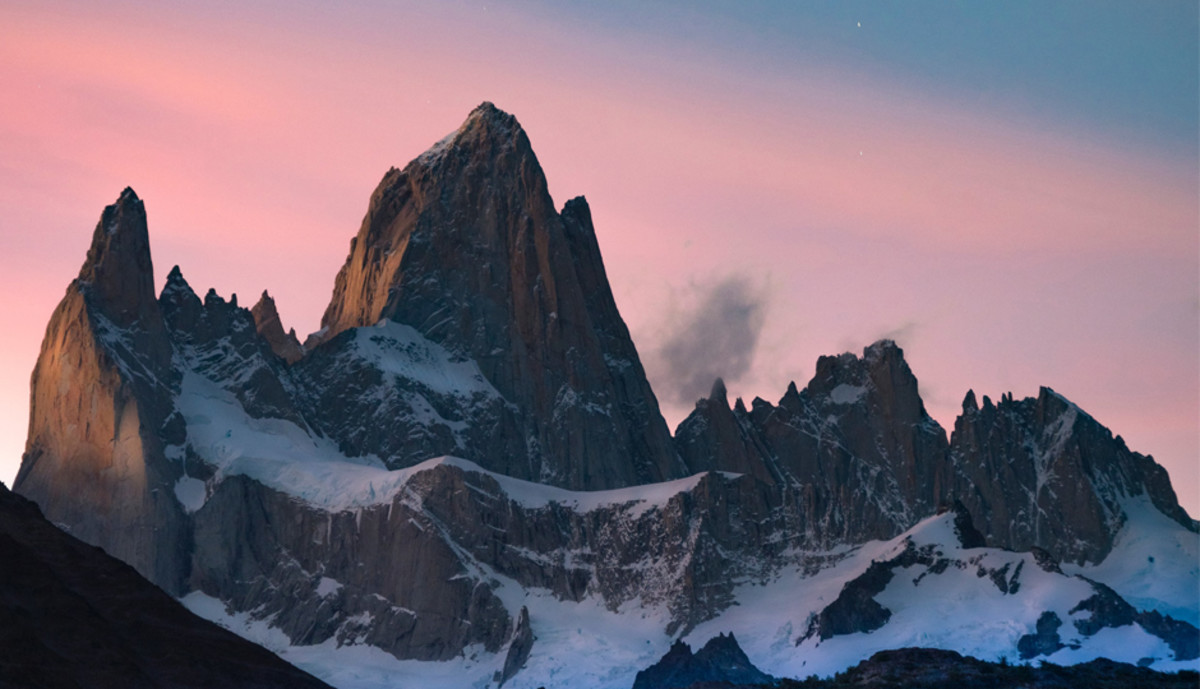 In a 20-hour blitz, Sean Villanueva O’Driscoll and Jon Griffin climbed a virgin monster off-width up the South Face of Cerro Chaltén (Monte Fitz Roy) on the Argentine-Chilean border. The 500-meter line initially followed the first two pitches of The Colorado Route, a 6c+/5.11b splitter crack line put up by Max Barlerin, Quinn Brett, and Michael Lukens in 2016. It then branches off to fire up a 5-6” wide crack system for 350 meters with chimney sections interspersed throughout the route’s eight total pitches. Difficulties ranged up to 7a (5.11+).

The team topped out at 3:40 A.M. on the morning of March 4th, after a 7:30 A.M. start the previous day. Villanueva O’Driscoll and Griffin then slept for a few hours up top before heading down (they carried a single sleeping bag, though no tent or stove).

As the other major routes on Chaltén’s South Face are all inspired by foreign locales (Washington, Colorado, Britain, California, etc.) the route’s chosen name, La Chaltenense, was intended as a way of paying respect to the local El Chalten people. Both climbers have been living in the remote Argentine town for over a year now.

In a Facebook post from Patagonia Vertical, Villanueva O’Driscoll reported that there were “some desperate moments! Where I would slip down a few cm, get completely out of breath, try to find some way of jamming some part of my body, either a foot, a knee, a leg, an arm, chest…, get a really bad lactic acid build up in some muscle I had never felt before, try and catch my breath back, stop my mind from wanting to give up!, recover and then get back at it!!! and try and recover those few cm I had lost!!!!…”

Reportedly, the crack was so sustained that No. 6 Camalots were the only pro that consistently fit, meaning the duo had to walk or shuffle their two No. 6s constantly, so they often climbed with little to no protection between the belays. Since the line ran up the southern face of the peak, sunlight was scarce, with reportedly only an hour or so of light in the early morning and a quarter hour before sunset. Both men suffered frostbite in the freezing temps, though Villanueva O’Driscoll, fresh off a February solo first ascent of the Fitz Roy Traverse in reverse (The Moonwalk), apparently got the worst of it, with some damage to his toes that required medical treatment.

Villanueva O’Driscoll’s famous tin whistle joined them on the route, but it was too cold on the summit for the Irish-Belgian climber to play a tune. The pair also created an eclectic mini playlist for their ascent, which Griffin broadcast on a portable speaker to keep the stoke high. The playlist, which can now be found on Spotify, includes such classics as The Dubliners’ “The Rocky Road to Dublin” and Simon and Garfunkel’s “El Condor Pasa.”

La Chaltenense now towers high as one of the longest and most sustained off-width routes on the planet.

UKC Information – NEWS: Second Ascent of Lexicon E11 7a by...

Yamaha Caps 2021 with File Help of Public Land for Recreation...

Dick’s Sporting Items’ New CEO: Being a Feminine Chief Is a...

Composites within the International Sporting Items Market is anticipated t…

The Finest Reusable Cutlery Set For Tenting, Journey and On the...

College students can discover neighborhood within the nice open air –...