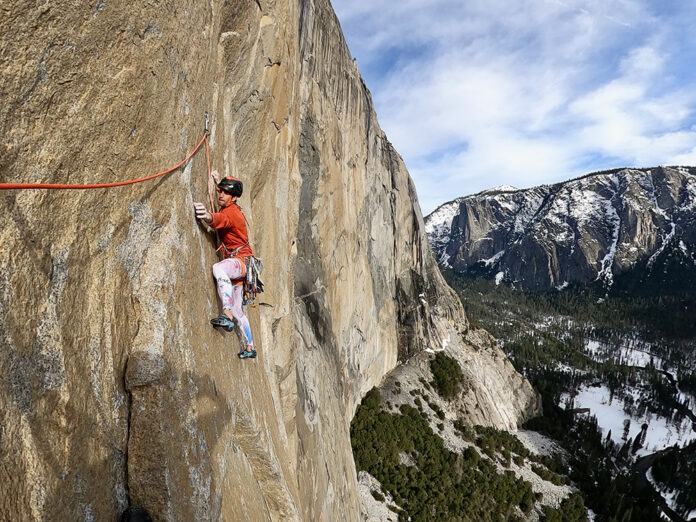 Belgian climber Sébastien Berthe has abandoned his attempt to free climb Dawn Wall on El Capitan in Yosemite, USA. First climbed by Tommy Caldwell and Kevin Jorgeson and repeated by Adam Ondra, this is known as the most difficult big wall climb in the world.

Last week the highly experienced big wall climber Sébastien Berthe from Belgium abandoned his attempt to free climb Dawn Wall, the most difficult big wall free climb in the world located on the SE Face of El Capitan in Yosemite. Freed by Tommy Caldwell and Kevin Jorgeson over a period of 19 days from 27 December 2014 to 14 January 2015, this 1000m line was impressively repeated a year later, by Adam Ondra from 14 to 21 November 2016. The 32-pitch outing has not been repeated since despite the attempts by some of the world’s best climbers including Nalle Hukkataival in 2020 and, now, by Berthe.

Berthe started trying the line at the start of January with fellow Belgian Siebe Vanhee and the pair quickly realised that this undertaking was in a different league altogether compared to all their previous multi-pitch climbs. They got a feel for the entire route by topping out on 28 January, then worked the crux pitches extensively. Vanhee had to return to Europe before they were ready for the push, and so Berthe continued working the line, spending a total he spent two months fine-tuning and optimising the beta. He then set off on what would turn out to be a dogged 23-day attempt, 16 days of which would be spent attempting the highly technical 9a traverse on pitch 14. This guards the entrance to the meat of the route, three 9a’s back-to-back-

Despite feeling confident for the push, Berthe battled hard right from the outset. He broke a hold on the crux of pitch 3 and required 4 attempts to surpass this, then rested the following day due to rain. Over the next week he slowly fought his way up to pitch 14 which he reached on day 9 and, after resting another day in his portaledge, while on day 11 he finally worked out a foot sequence for the boulder problem crux right at the end of the pitch. He immediately gave it a couple of fruitless attempts, but things at this point looked bright and he rested for two days for his skin and body to recover. On day 14 he came heartbreakingly close to sending this pitch, falling off the very last hold right in front of the the belay. The insecure boulder at the start then stopped him five times in a row and Berthe, writing in his diary, noted “Disappointment of the conditions which were supposed to be incredible. Headache and fatigue because insomnia due to excitement.” He rested another day, then failed to make it past the insecure, bouldery start on pitch 14. A cut finger required another rest day and on day 18, despite good feelings, he failed once again on the second crux. He decided to rest for three full days to give his skin the chance to heal properly and, considering day 22 his last chance, he gave it all he had once again, getting close but not close enough. His diary entry for that day reads “Mentally it’s hard, I don’t want to be there anymore, I’m fed up. The pleasure is no longer there and I stay to be sure I have tried everything and have no regrets.” The next day before the sun reached the face he fired another two attempts, in the evening two more but then, with a split fingernail, he finally accepted failure and rapped off.

Intense preparation had led up to Berthe’s attempt. In Europe he had made surprisingly short work of many of the hardest multi-pitch climbs across the Alps, while on the Big Stone he had made the second free ascent of Heart Route with Simon Castagne in 2016, climbed Freerider in a day with Vanhee in 2017 and completed a rare free ascent of The Nose in 2019. Having sport climbed up to 9a+, his failure now underlines not only the complexity of the route, but also the inspirational vision and first ascent ascent carried out Caldwell and Jorgeson, and the utterly brilliant second ascent by Ondra on his first-ever visit to Yosemite.

Berthe’s determined efforts on the Dawn Wall are highly commendable, all the more so as they came about after spending 25 days sailing the Atlantic Ocean with a group of friends. He will return to Europe in June in exactly the same manner as on his outbound trip, in a sailing boat.

Minneapolis Park & Recreation Board : New Grass Volleyball And Outside...

Barbara Zangerl and the invisible bond of a climbing partnership