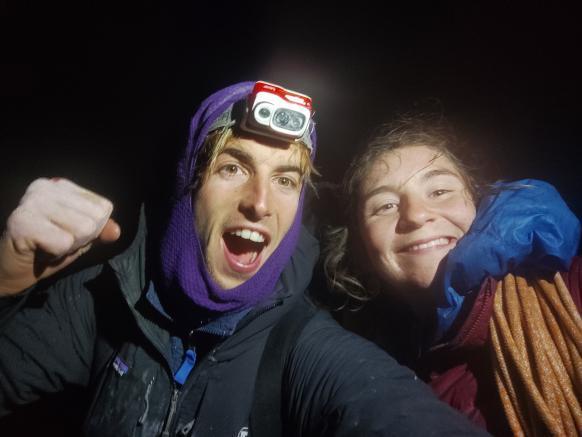 Belgian rock climber Sébastien Berthe has made a swift repeat of El Niño on El Capitan, managing to onsight or flash almost all of this classic Huber testpiece in a single day.

After investing over two months on the Dawn Wall on El Capitan and then finally abandoning his attempt in mid-April, Belgium’s Sébastien Berthe is ensuring he’s making the most of his time left in Yosemite valley with a series of noteworthy ascents.

As reported, the 28-year-old repeated Golden Gate over a nine-day period with Soline Kentzel and now, belayed by Kentzel, he has made short work of another Huber testpiece, El Niño. Located on the SE Face, this 30-pitch outing tackles the steepest section of El Capitan by following much of the ground-breaking North America Wall (Yvon Chouinard, Tom Frost, Chuck Pratt, Royal Robbins 1964) and was freed with difficulties up to 5.13c, after the addition of various variations, by Alexander Huber and Thomas Huber in 1998. El Niño was only the third free route on El Cap, after The Salathe and The Nose.

At the time a short rappel on pitch 13 was required to breach a completely blank eight-meter piece of smooth granite to the left of the Big Sur Ledge, and this section of A0 was dispatched with altogether in early 2017 by Sonnie Trotter and Alex Honnold who scoped a 3-pitch free variation. Dubbed Pineapple Express, this all-free variation to El Niño was first climbed in a single day by Trotter in autumn 2018 with Tommy Caldwell. After the Canadian’s ascent planetmountain.com wrote “Time will tell which version will become the future standard”; judging by recent repeats, including that of Berthe, it very much seems as if the Pineapple Express variation is becoming the norm.

Berthe and Kentzel set off at 6:00am and topped out after circa 17 hours of non-stop climbing at 10:50 pm. The 28-year-old’s ambitious aim had been to onsight or flash the entire route and he got extremely close – pretty much the closest anyone has got so far at onsighting any route on the Big Stone.

Climbing smoothly Berthe either flashed or onsighted every pitch, including the first five 5.13’s, until the bouldery Eismeer pitch 23. This is the last hard 5.13 pitch and it offers two alternatives: the original Eismeer or, by breaking off to the left, the Lucy is a Labrador 5.13a variation which, although easier, is often wet. Berthe opted for the original line but fell and, after working the moves, then redpointed the pitch. Having narrowly missed out on a no-falls ascent, he decided to give the wet Lucy is a Labrador variation a try but, after slipping out of the soaking pin scars, he returned to the original line and then sped to the summit. As per usual, Berthe’s ground-up free ascent must be viewed in its greater context: he sailed from Europe to America earlier this year and will sail back home in June.

This is obviously not the first time El Niño has been attempted onsight. Australia’s Lee Cossey onsighted or flashed all but three pitches over six days in 2007, Austria’s Hansjörg Auer on-sighted all but four pitches over a four-day period in 2008, while Japan’s Yuji Hirayama made an inspirational ascent, falling only twice over four days way back in 2003. This came about immediately after his astonishing onsight attempt of Golden Gate and, perhaps even more impressivly, his onsight attempt of Salathé Wall in 1997 which resulted in a 38-hour free ascent after only three falls in total.

Remarkably, the first – and to date best – onsight attempt was carried out by Britain’s Leo Houlding and Patch Hammond in autumn 1998, a month after the Hubers’ first ascent. Over five days that October Houlding onsighted all but one of the pitches; he fell off the first pitch and sent it second go, before onsighting the remaining 29 pitches. Both climbers were a mere 18 years old and this was Houlding’s first big wall experience, Hammond’s second after narrowly missing out on a free ascent of Freerider two weeks earlier with Ben Bransby.

In February, the UIAA launched the Mountain Employee Initiative (MWI) to...

Virgin Islands Nationwide Park Is Usually Forgotten. It Shouldn’t Be.