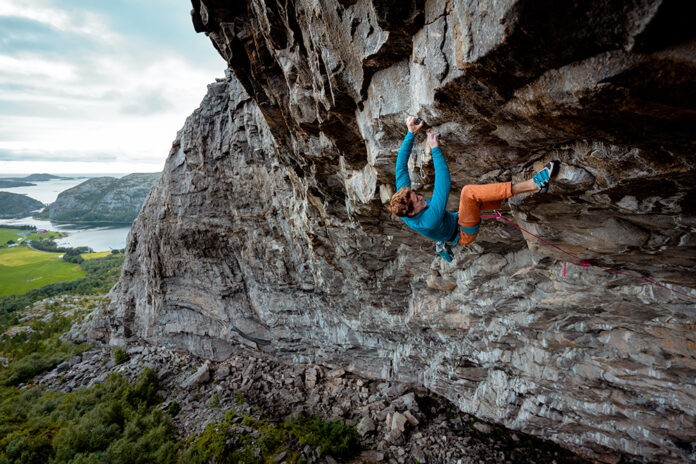 French climber Sébastien Bouin has made the first ascent of Nordic Marathon at the Hanshelleren Cave in Flatanger, Norway. The 130m line is a combination of different routes and is graded 9b/+

On Thursday the 21st of July 2022 Sébastien Bouin made the first ascent of a new 130m monster-route the crosses the Hanshelleren Cave in Flatanger, Norway. Called Nordic Marathon, the new route links the first pitch of Nordic Plumber (8c) and the cruxy second pitch of Thor’s Hammer (9a+) before breaching the final headwall to the summit of the cave.

The idea, the French climber explained, came from the “gatekeeper” to Flatanger Adam Ondra: “When Adam told me about his project to cross over the cave, and go from the ground to the summit, I was immediately amazed by this idea. The main goal of my trip was to check out this monster link-up. The idea was big, really big. But it’s definitely the kind of challenge which attracts me. The bigger it is, more motivated I am.”

Bouin first jumared up and sent the 9a+ second pitch, then started making redpoint attempts from below, noticing “It changed so much at the end. Coming into the 9a+, with my arms already so pumped in the last crimpy crux after 80m of climbing was insane.”

Apart from the inordinate physical difficulties, Bouin had to deal with psychological pressure “The sheer size of the route makes it hard mentally. You can have one go every two days. It’s so much climbing, in one intense burst that you simply can’t give two goes in a day. Then if you want to be as fresh as possible, you need a rest day in between. So it was quite hard psychologically to only give it one burn every two days. The pressure felt so high in this last crux.”

As sometimes occurs on huge stamina testpieces, Buoin adopted a tactic of changing ropes. Nevertheless “The rope drag was also insane. Even if I had already switched ropes once during the route – I had to untie my knot and free-solo the last 5/10 meters (really easy climbing.”

As mentioned, Nordic Marathon was climbed with the Nordic Plumber 8c start. Seeing that the linkup could begin with the 9a first pitch of Thor’s Hammer, or the considerably harder start of Move 9b/+, no doubt there will be more to report about from Flatanger in the future.

Cyclists gear up for tenting journey in Little Lake Park

CSU grad publishes paper on LGBTQ+ inclusion in outside recreation