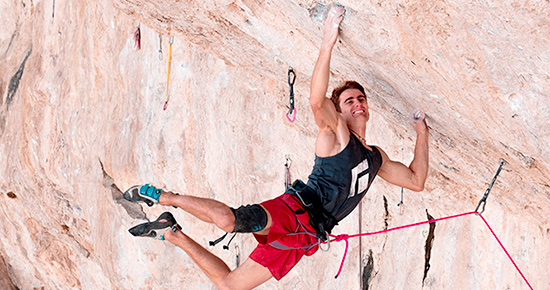 On 01/11/2022 French climber Sébastien Bouin made the first ascent of the direct start to Jumbo Love at Clark Mountain. The new variation is called Suprême Jumbo Love and graded 9b+.

On Tuesday November 1st 2022, French climber Sébastien Bouin made the first ascent of the long-standing direct start project to Jumbo Love, naming it Suprême Jumbo Love. The direct start to Jumbo Love was reputedly first attempted by Chris Sharma in 2010, following his ascent of the original line in 2008, and the direct variation adds around 20m of new hard (9a) climbing, before joining up with the original Jumbo Love line just before its crux. Physical, pumpy climbing leads to the lip of the overhang, before finishing up a technical 20m slab. The 29-year-old believes the new connection, which is a whopping 70m long, weighs in at a grade of 9b+, making it the hardest sport climb in the Americas.

Bouin had travelled to the USA in mid-October and realised a childhood dream on the 19th by sending Jumbo Love, the 55m 9b bolted by Randy Leavitt who watched Bouin make the send. It was while working Jumbo Love that Bouin also started attempting the direct start. A breakthrough moment arrived when he made it through the lower crux was on his third attempt of the day, but he was way too tired for the upper section.

He explained “I knew I had to do the direct and the Jumbo Love crux on the first try if I wanted to have a chance on the pumpy Jumbo Love section.” Yesterday precisely this happened. “Sometime everything just comes together, shape, conditions, vibes, friends, cameraman, luck… I know it doesn’t happen that often, and I am very grateful to live such big moments.”

Earlier this year Bouin travelled to Flatanger in Norway where he made the third ascent of Change (9b+), the first ascent of the 130m 9b/+ Nordic Marathon and the second ascent of Iron Curtain (9b), while at the end of April he made the first ascent of the futuristic 9c DNA in France’s Verdon Gorge. Bouin can now look back on a very successful trip to the USA and he stated “Finishing this trip by sending the direct start couldn’t be more perfect.”

New York can do higher to make out of doors areas...

Reminder! The Mountain Partnership Secretariat is compiling inputs for its 2022...

Climbing out of the deep freeze