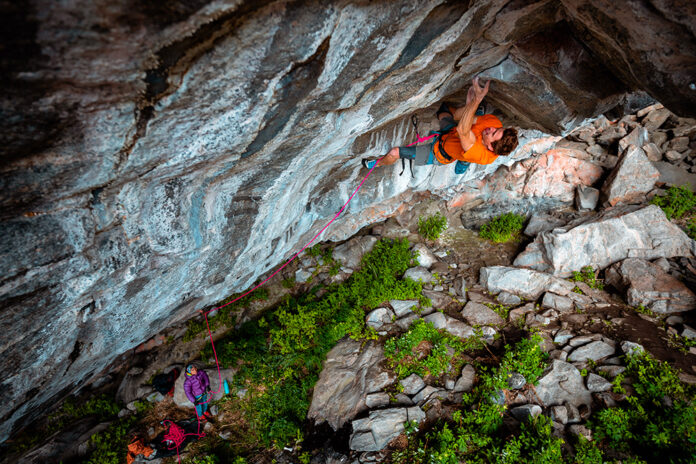 On Friday 5 August French rock climber Sébastien Bouin made the third ascent of the 9b+ Change at Flatanger, first ascended by Adam Ondra in 2012 and repeated by Stefano Ghisolfi in 2020.

Last Friday Sébastien Bouin made the the 3rd ascent of Change, Adam Ondra’s 9b+ located in the Hanshelleren Cave at Flatanger in Norway. First ascended by Ondra in 2012, the huge line was hailed as the first 9b+ in the world and the grade was only confirmed 8 years later when Italy’s Stefano Ghisolfi made the second ascent in 2020.

Change is split into two distinct sections, a first pitch to an anchor which is given 9a+, and the second pitch extension which bumps the grade up to 9b+. Bouin repeated P1 in mid-July and then sent P2 last week before attempting to link the two from the ground. With only 4 days at his disposal prior to returning home, he was under considerable pressure, especially since conditions were humid on the first two days. Feeling tired on day 3 he had no expectations, however when he reached the crag he realised conditions were perfect.

The Frenchman explained: “The conditions were exceptional! I was torn. Should I try it and take advantage of conditions? Or should I wait until I knew I was fully recovered? I finally decided to try the route. I was literally flowing through the holds, due to the good conditions. It was so different to the day before. I am happy to say that I made no mistakes and felt the belief that I could make it to the end, and I did! I am not usually a ‘last day, last try’ kind of guy, but this time it happened. I climbed the route with kneepads, like previous ascensionist Stefano Ghisolfi.”

What You Missed: Surfer Andrew Cotton on the Influence of HBO’s...

A Nearer Take a look at the PR Feud Between Liberty...

Why Your Native Operating Retailer Issues

7 Methods to Save Cash on Journey This Fall