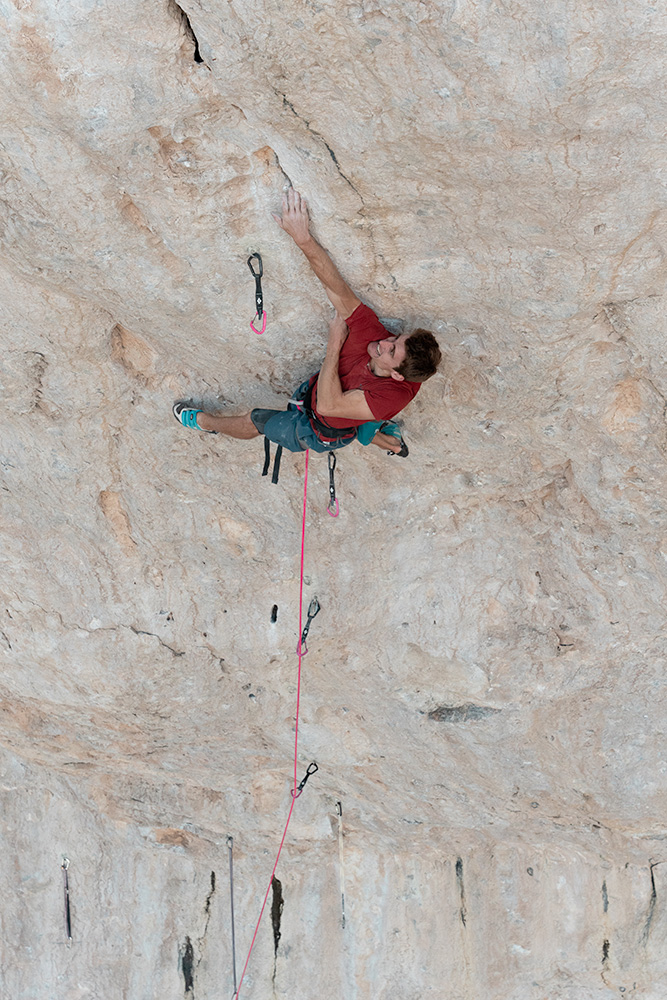 French rock climber Sébastien Bouin has made a rare repeat of Jumbo Love, the 9b at Clark Mountain, USA, first ascended by Chris Sharma in 2008.

On Wednesday October 19th 2022, French climber Sébastien Bouin made a rare repeat of Jumbo Love at Clark Mountain, USA. The route, which was first bolted by Randy Leavitt and subsequently freed by Chris Sharma in 2008, became the world’s first confirmed 9b and America’s hardest route at the time. Ethan Pringle grabbed the first repeat of the mammoth 80m line above Las Vegas in 2015, while Jonathan Siegrist made the second in 2018. Bouin, who is now only the 4th to reach the anchors unharmed, had the following to say:

“An old dream came true last Wednesday. This king line has attracted me for a long time. It was a true inspiration to see the footage of Chris Sharma on it. I started climbing around 2005 and it was one of the most incredible climbing films I had watched at that time.

Jumbo Love looked like everything I like in climbing: a perfect huge orange steep wall in the middle of the Mojave desert. I knew this line and this wall will be my pure climbing style. Climbing on this line is something I have been waiting for, for several years. And I am definitely not disappointed. It’s an amazing line with perfect moves.”

The climb required far more then immense power and flawless technique as Bouin soon found out. “Jumbo Love is not just a hard line, it’s a whole adventure. I totally underestimated the total process, the drive, the off-roading, and the hike in. We changed our car three times because it was not good enough to get to the crag. We also changed two tires due to off-road driving incidents… The 1 hour hike really takes it out of you. I am used to climbing for many days in a row. But, here, that would be a mistake. We had to preserve ourselves. And keep our energy and motivation up. We slept some nights in the desert, so as not to drive every day. I did the route on my 10th climbing day.”

Bouin used kneepads for his send, but explained that “It’s not like “Iron Curtain” or “Change”, where the kneebars make a big difference. I think Jumbo Love stays on the same level, with or without.” It’s worth noting that he also attempted a direct start, which adds 8c+ climbing before the crux.

Leap Into The World Of Alpine Free Climbing In ‘The Alpinist’...

Climbing Hamilton’s escarpment stairs for enjoyable might value you $880