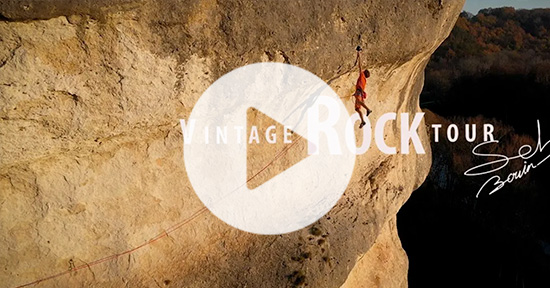 The video of Seb Bouin’s climbing some classic routes at Le Saussois, known as the birthplace of French sport climbing.

This is undoubtedly one of the episodes that we enjoyed the most: during his Vintage Rock Tour Sébastien Bouin stops off at Le Saussois, the historic crag south-east of Paris, scene of the evolution of French free climbing.

The short and intense limestone walls host great classics such as L’échelle à poissons, the first 7a in France climbed in 1977 by Jean-Claude Droyer, L’ange, the first 7b in the country freed by Laurent Jacob in 1980, the famous 7c+ Chimpanzodrome freed by Jean-Pierre Bouvier in 1981 and also violent Le Bidule, the first 8a+ in France freed by Marc Le Menestrel in 1984.

It’s fascinating to see how beautiful these walls and the climbing are, but also to witness Bouin – a 9b calibre climber – struggling to decipher the bouldery starting sequence of a route freed almost 40 years ago…

Dick’s Sporting Items Weekly Offers gives as much as 50% off...

The World’s Most Harmful Mountains

It could be sensible to replenish on summer season recreation provides...

Tributes pour in Sunday for Boston man struck by lightning whereas...