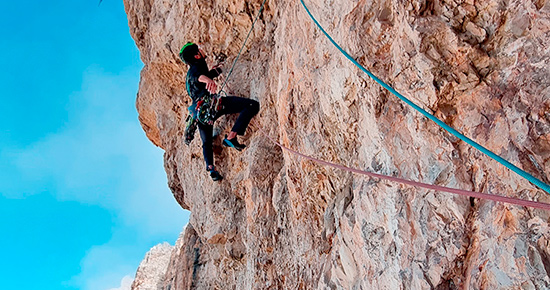 Simon Messner and Martin Sieberer have added a new route to the Dolomites with their first ascent of Semifreddo on Punta Aurelia, a striking tower located on the south face of Sass Pordoi. The pair started works on an intensely cold day in March – hence the name – and finished the line at the end of June, before both make at free ascent this summer.

Semifreddo climbs to the left of the classic Via Piaz, established by Tita Piaz and Sandro del Torso on 27 September 1933. After an easy first pitch the route breaches the obvious roof with its crux pitch graded IX; the climbing is described as interesting and varied, but overall the route “requires a certain mental strength, since the rock is not always of the best quality and some runouts are inevitable.”

Messner told planetmountain.com “The morning Martin Sieberer and I started to establish the route, my car thermometer plunged down to -16°C, because it was still winter. It was so cold that we could barely climb, but somehow we managed to climb the first pitch (which is also the crux, IX). Although we were frozen through and through (especially the second who had to belay!), we knew we’d be back soon to finish this interesting line and then free it. And that’s precisely what we did: on 10 June we reached the summit of Punta Aurelia, then we returned for the first free ascent: on 4 August Martin made the redpoint, then on 12 August it was my turn to free our Semifreddo.”

Get the Zermatte Tenting Sleeping Pad for 38% Off