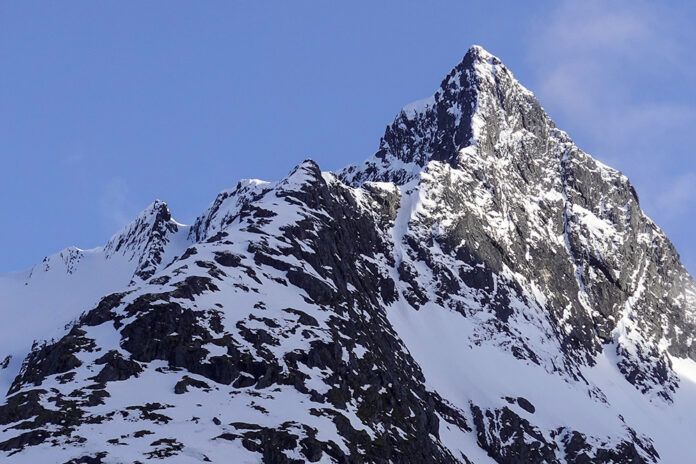 Simon Richardson reports about the first ascent of the North Ridge of Ulvetanna on Senja Island in Norway, climbed on 23 April 2022 with Mark Robson. This is possibly only the second ascent of the mountain.

Senja Island in Northern Norway has been described as Scotland on steroids. Steep mountains with fairy tale summits plunge straight into the sea. The maritime climate combined with Arctic Circle temperatures provide a host of winter climbing opportunities and the island attracts a steady stream of adventurous mountaineers. Heavy snowfall makes mountain travel difficult in mid-winter and many enjoy climbing roadside ice.

I first visited Senja in February 2019 with Micha Rinn and was intrigued by the mountaineering potential in the spring. Rather than focus on easily accessible crags I wanted to attempt longer mountaineering routes leading to summits. Mark Robson was keen to join me, and we arrived in Senja on 11 April. We were hoping for late season Scottish conditions with fast travel over neve snow slopes and efficient climbing up gullies filled with snow-ice.

Local guide Bent Eilertson was intrigued and enthusiastic but a little sceptical about our plans. In truth, our thinking did not quite work out. Our calculations had not allowed for the sun rising higher in the sky than Scotland and the consequent rapid deterioration of snow conditions. Early in the trip we dodged consistent avalanche danger while making first ascents on Steinsethogda (473m) and Litjebrusen (532m). Both were enjoyable 300m-long Scottish Grade IV mixed routes, but they were not quite the objectives we were looking for.

Our opportunity finally came on 23 April, the last day of our trip. After a week of warm weather, the temperature plummeted bringing the higher mountains back into climbing condition. We opted for the 500m-high North Ridge of Ulvetanna (c800m) an adjacent summit to Stormoa (974m), the second highest mountain on the island.

The climbing was straightforward at first and we made rapid progress. But as the ridge narrowed the climbing became more challenging with steep mixed sections between horizontal pitches of narrow and sometimes corniced ridge. The snow was already softening in the early morning sun on the east flank of the ridge, but the shady west side was still deep unconsolidated powder. The only way forward was to follow the exact crest as it reared up into an ever-steepening prow. Silently, we both thought that we would fail on several occasions, but we kept our thoughts private and continued pushing on. The crux was the penultimate pitch where the crest became a vertical prow of compact rock. It looked impossible from below, but a hidden 15m crack led through the steepest section followed by a scary 20m run out on widely spaced turf.

When we reached the tiny summit and looked down into the avalanche ridden Stormoa basin we knew we had no option but to carefully abseil down the way we had come. We graded the route Scottish VI,6 – a grade that captures the uncertainty and insecurity of the terrain. The big thin face routes on Ben Nevis such as Galactic Hitchhiker are given this grade and our ascent required a similar level of boldness and commitment.

That evening Bent told us that Ulvetanna had only been climbed once before, via the East Ridge, just three summers before. Our quest for good springtime climbing conditions on Senja had not been completely successful, but if nothing else, it demonstrates the vast possibility for adventurous mountaineering on the island.

Thanks to Bent Vidar Eilertson for his advice and support: FB Senja Lodge

Adventurous couple tenting on a abandoned island off the Australian coast...

$four.three million to enhance parks, out of doors areas throughout Kentucky

Taking the Open air to a New Stage at Lyndon Institute...