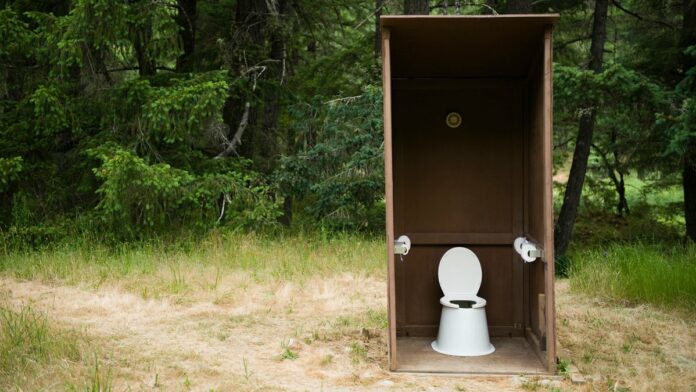 What’s your worst outdoor fear? Is it being stalked by a mountain lion or chased by a grizzly bear? Perhaps it’s being buried in an avalanche, or running out of food and water deep in the wilderness.

My worst outdoor fear is far less adventurous but way more disgusting. I’m terrified of the lowly trailhead toilet; specifically, I worry I might somehow fall into one and land on the mountain of human waste rising from below. I always assumed this anxiety was irrational and unfounded, until I read this story about a woman in Washington State who plummeted headfirst into a trailhead toilet last Tuesday.

The woman, described as in her mid-forties, was visiting the Mount Walker hiking trail on Olympic Peninsula when she entered one of the pit toilets and accidentally dropped her phone down the bowl. I hate to pass judgement, but no Instagram video or brilliant tweet would convince me to do what she did next: rather than cut bait on the device, the woman attempted multiple methods to retrieve it from atop the pile of human waste.

First, she used a dog leash to try and fish the phone out. When that plan failed, she disassembled the structure surrounding the hole, used the leash to support her weight, and leaned way in to grab the phone.

As you may assume, that’s when the proverbial shit hit the fan.

According to an incident report by the Brinnon Fire Department, the woman lost her balance and careened through the opened hole and down into the the eight-foot pit. Luckily, she was unhurt by the fall. She found her phone—which somehow still worked—and called rescuers, who arrived 20 minutes later to save her from what I assume was the worst moment of her life.

Fire crews washed her down and offered her a Tyvek hazmat suit to wear, which she declined.

Tim Manley, chief of the fire department, told me that the woman was extremely polite to rescuers. But it was evident that she did not want to stick around afterward to chitchat.

“She was obviously pretty embarrassed,” Manley said. “After we washed her down, she just wanted to leave.”

There’s a lingering debate about whether you can die while stranded in this type of latrine, which is commonly called a vault or pit toilet. Unlike traditional Porta-Potties, vault toilets do not use hazardous chemicals to break down waste, and instead have water at the bottom.

Garrett Wilson, a project manager with Missoula Concrete Construction, which builds such toilets, told me that the woman was probably not in serious danger of asphyxiation. “It still wouldn’t be a lot of fun to be stuck down there,” he says.

But people often throw syringes, broken glass, and garbage down into those pits, so walking around in one is hardly safe. And vault toilets rely on ventilation systems to disperse the gasses that are generated from decomposing human waste. A poorly vented vault could be filled with methane and hydrogen sulfide, both of which are harmful to inhale.

“There’s also the risk of hand-to-mouth contact, which could make a person very ill,” a media representative from the National Park Service told me.

The one element of this story that all sources agree on is its unusual nature—nobody had ever heard of this happening before. Manley, who has worked in firehouses for 40 years, said the scenario was a first for him.

“When the call came in, we all just looked at each other and were like, ‘Did I just hear what I think I heard?’” Manley says.

Wilson said his coworkers sent the story around to each other and marveled at its bizarreness. They build concrete outhouses for a living, and had never heard of anyone tumbling into one of their constructions on accident.

Safety officials have declined to release the woman’s name, and frankly, I cannot blame them. Who would want to be attached to such an unfortunate incident—one that is a nightmare for many of us. And one that (let’s admit) was absolutely avoidable. The other element of this situation that all of my sources agreed on was what to do if your phone somehow tumbles into a trailhead toilet.

Totally different type of out of doors business present envisioned for...