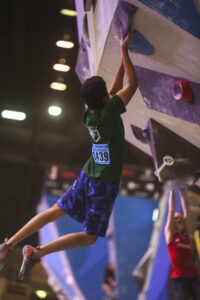 Dadwal has spent most of his life climbing. His father helped spark his love for the sport by teaching him to climb when he was around three years old. His love for it only grew and he started learning to climb indoors at the age of five.

“At first I didn’t really want to fall because I was scared of hurting myself,” said Dadwal.

At the age of 10, Dadwal became more serious about his abilities and his journey only continued.

Dadwal takes part in various climbing competitions. Specifically, he took part in the USA Climbing Nationals in Reno, Nevada, for bouldering and sport climbing in the summer, after qualifying for both at Regionals.

“I didn’t do as well as I wanted, but I can go next year and do better,” said Dadwal.

The trip to Nevada actually came after hours of hard work and dedication.

Dadwal trains three days a week in Worcester and learns from coaches who help him improve his weaknesses.

He also participates in open competitions that climbers of all ages can participate in. He said that gave him experience competing with adults who are older and might be more experienced than him.

For some time, due to the pandemic, Dadwal was unable to participate in the types of competitions in which he excelled.

Although Dadwal put up a two-and-a-half meter rock wall in his garage, he said that last year

a challenge because he couldn’t go to the gym as usual.

“I didn’t really realize how much I missed the competition until the pandemic happened and I couldn’t compete anymore …” said Dad. “It was pretty boring without climbing.”

Advice to other climbers 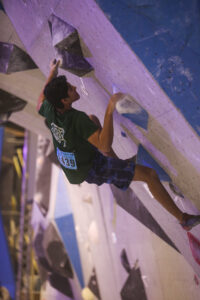 Dadwal was also a beginner once. And while many are terrified of falling or reaching new heights, he has advice for those looking to get into the sport.

Dadwal said to become a versatile climber, people need to work on a variety of skills rather than just building on their strengths.

His other advice is to bring some friends and try climbing for fun.

“Don’t worry that you won’t be able to do the hard stuff and just have fun,” said Dadwal. “You don’t have to do any training or anything, just climb.”

“There are much more difficult things that I can try”

With Dadwal finishing his high school career, he plans to compete in national championships again next year.

outside, visiting places in New England that might be more challenging for him. He said he hopes to travel to Spain or California one day to do more outdoor rock climbing.

“In the climbing hall they are only set to a certain level, but outside there are much harder things that I can try and that I really want to try,” said Dadwal.

What Biden’s New Initiative Means for the Parks

Examine goals for suggestions on outside recreation on Albertan Crown lands