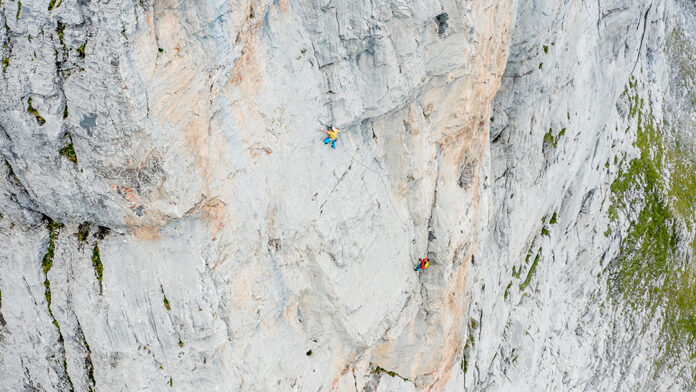 Interview with Swiss alpinist Silvan Schüpbach who on 31/07/2022, with Carlos Molina from Argentina, climbed 7 routes in 24 hours in Wendenstöcke, Switzerland.

“An absurd effort, but I would do it again.” These words are enough highlight the intensity of the achievement of Silvan Schüpbach, the Swiss alpinist who on 31 August took on the huge limestone wall of Wenden, a wall that is home to some of the most difficult routes in the Alps, and managed to complete the ambitious project of climbing 7 routes in 7 sectors in just 24 hours, without a break.

A climber who does 7a in Wenden can do it anywhere and with any protection, they say. It’s a huge limestone bastion where the routes are physical and difficult and the approaches are complex and long. This exceptional rock features some of the most difficult routes in the Alps, climbs that require total self-control. Here, a simple distraction, a moment of inattention, can have serious, even tragic consequences.

This is the wild, harsh, and spectacular environment where the 39-year-old decided to operate. For him, a skilled Swiss climber, it was not the first contact with this vertical limestone world. He had previously had the opportunity to test himself on Polenta con Farina degli Altri, a difficult 500-meter multipitch route graded 8b. This time, Silvan decided to outdo himself by devising a new and ambitious project: climbing 7 routes in 7 sectors in just 24 hours, without interruption. “A project that always seemed impossible to me” explains the Swiss climber, whose curriculum vitae includes expeditions all over the world, with various experiences in alpine style that have led him to complete first ascents of routes on virgin walls and mountains in Patagonia, Greenland and Pakistan.

The project reveals Silvan’s deep bond with this iconic Swiss and Alpine face. It was an ambitious undertaking that took him to his physical and mental limits and allowed him to enter into intimate contact with the history of this place that has been experienced and “consumed” only by the best climbers in the world.

Silvan, what’s your connection with Wenden?
I first came here more than 20 years ago. I still remember how the climbing style this wall demands (vertical climbing, on slabs, often runout) didn’t suit me at all. What fascinated me was the setting, a magnificent environment to experience. So I decided to spend some time (actaully a lot) to learn how to tackle these routes.

Today, standing at the base of the Wenden feels like being at home, or like meeting an old friend. It’s not just a question of performance or grade. As soon as I touch this rock, something special happens: I feel good and full of energy, excited. It doesn’t matter whether it’s a difficult or easy route — the important thing is to be here.

When did you first conceive of the 7×24 project?
It’s a difficult challenge that I always considered impossible, or almost. Often, the climbing is not easy; there are very dangerous sections to climb. Rappelling and changing sectors takes time. There were many reasons to abandon the idea.

So why did you try it?
This year I was supposed to take part in an expedition, which unfortunately fell through. So I started working on this project, looking for solutions that would resolve all the relevant critical issues. I climbed all the routes included in the project and evaluated the best way to move from one to the other – that is, how to manage changing from sector to the next. The final decision was made based on logistical and organisational assessments rather than on the level of athletic performance.

Which of these tested you the most?
The most difficult technically was Gemini, which made for a fairly challenging start. Especially doing it in the dark, at 3:30 in the morning, right after a cup of coffee. The most complex was without a doubt Imago, the last one. A technical route, which I began after what was already a great undertaking. I was climbing with swollen feet, a headlamp, and a brain that was tired from so many hours on the wall. Twenty hours, to be exact. It was a great relief when Carlos Molina, my climbing partner, offered to climb the last two pitches.

You mentioned the significant organizational work behind the project. What was the greatest complication?
Coordinating schedules. Carlos was very busy with his work, so he couldn’t come with me when I went to attempt the routes I didn’t know yet. I was worried that my partner wasn’t sufficiently motivated and enthusiastic about this project, and I wasn’t sure that I would be able to pass on my enthusiasm and my knowledge of the routes to him.

What can I say now? I couldn’t have wished for a better partner: his skill on the wall and his commitment were the reason for our success.

What was the greatest difficulty on the wall itself?
Definitely rappelling, which is dangerous, as a rule. It’s easy to do, but it’s also easy to make a fatal mistake. While rappelling from Las Aguas del Inferno I felt very tired, and on the last rappel we had to get past a large snowfield which was unconsolidated due to the summer heat. A crevasse had formed that required concentration and time to be managed safely. This was certainly one of the most complex moments of the whole project.

A project like this requires perfect conditions…
Yes, conditions are crucial for this type of project. We were very lucky. Usually in summer it’s too hot, while in fall the days are very short. We had a cloudy and windy day – exactly what we were hoping for!

What was it like to be able to complete the project?
We got back to the car at 5:30 a.m., 27 hours after we started climbing. It was a beautiful sunrise and I felt happy, but also tired and drained. It took me more than a week to recover fully. Wenden is now an indelible memory, a lasting mark that brings a smile to my face every time I find myself looking at the wall. Every now and then it makes me want to laugh at myself too, because if the mountain were conscious it couldn’t help but think of the pointless and absurd effort that this project required of me … but I would do it again.

Silvan Schüpbach is an Ambassador KARPOS

Tenting out this summer season? The place to see a few...

New climb on Marmarole within the Dolomites by Stefan Glowacz, Philipp...

With COVID Numbers Climbing Once more Throughout Tri-State Space, Officers Once...