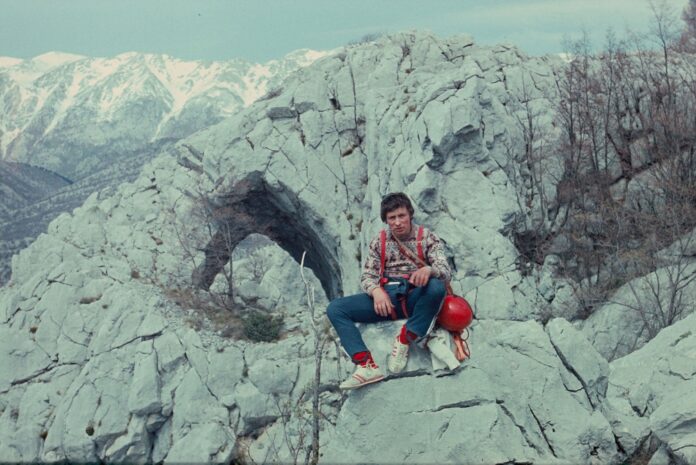 Interview with Slovenian climbing legend Silvo Karo who this weekend at Briançon in France will receive the Piolet d’Or Carrière – Lifetime Achievement Award 2022 for his mountaineering that spans the last four decades and includes more than 300 first ascents from the Alps to Patagonia. By Bulgarian journalist Tanya Ivanova.

I first heard about Slovenian alpinism along the topic of the West Ridge of Everest. In 1984, our Bulgarian climbers made the first full traverse, later known as the Bulgarian traverse, ascending from the West and descending from the South. It was a historic moment and we all knew who were the first on this stunning West ridge – Slovenians. When I found out that this year’s Piolets d’Or Lifetime Achievement Award would go to Silvo Karo, the second Slovenian after Andrej Štremfelj, I read more about his achievements and immediately wanted to contact him and ask him for this interview. Tanya Ivanova

Silvo, with what feelings do you accept this award?
I am definitely proud to receive this prize because it is recognition for my long climbing career. But I am actually even happier with the feedback I get from the climbers all around the world – on social media, all the messages I receive, and also when I sell my book around the world. They all tell me that my climbing has been a big inspiration for them, and in truth I am even happier to hear words like these.

The words commonly used to describe you and your generation of Slovenian climbers are “legend”, “golden age”, “new level of climbing”. But what are you most proud of?
Above all, I am proud that we and the generation before us – the generation of the seventies – followed the same direction as climbers in the West. We learned from there. And often looked towards Great Britain, the cradle of traditional climbing.
We were a lucky generation, no one before us and no one after us will experience such a revolutionary development of mountaineering equipment as we did. This definitely contributed to the advancement of climbing. And of course we were very lucky to have Franček Knez as the head of our ‘80s generation, we learnt a lot from him.

What made you so confident in your abilities? What makes Slovenian climbers so strong?
That’s what I’ve already explained – that in early 80’s we were well connected with the world-class climbers. Our generation didn’t only to the Himalayas, like those that preceded us. In 1973 the first Slovenians visited Yosemite, and we were the first or the second parties from Europe to climb technically hard stuff.

How did you pay for your expeditions?
We dreamt of getting some money from the state – you know how it was in these countries before the fall of the Berlin Wall. We were always looking for ways to receive something from the government, because at that time alpinism was not an “alphabet” sport, an officially reconised activity. We then discovered a way: the government told us to go and organise some form of categorisation. They told us: “if you set this up, it will be the basis to create a ranking system of climbers, and through this you will get the money you need for climbing”. Throughout the early 80’s we received some financial support from the government, while the rest we needed to find from companies. Also, we worked a lot on high buildings to make money.

What about now and all these sponsors, expectations…?
Alpinism is an adventure and commercialism is taking that away.

Your autobiography is called “Rock’n’Roll on the Wall” – why? And how did this culture and music affect your lifestyle and your climbing? It was music, coming from the West.
Rock and Roll is music with a strong, fast rhythm and we brought this rhythm and energy to the walls. Also, if you make a direct translation, so often in our climbing we have to deal with real rolling stones while climbing the big walls. These were maybe the reasons why I chose this title for my book.

They say that Fitz Roy, the South Face of Cerro Torre and Bhagirathi III are the milestones of your climbing career. But for you, which ones are the most valuable expeditions from your perspective now?
I think I could put Bhaghirati III in 1st place, and then Cerro Torre South Face. We also climbed new routes on Fitz Roy, Torre Egger, and the East Face of Cerro Torre. But also in 90’s we completed some quite good ascents, taking this fast and light style of climbing from Yosemite to Patagonia. In 1999 I went to Patagonia twice – climbing in this light style with Rolando Garibotti, twice on Fitz Roy. Then we continued with this style – fast and light. To be light and fast means you must have a lot of experience, and then step by step you climb faster and faster. It’s like driving a car – if you don’t have enough experience, you can’t drive fast or do anything crazy.

You had absolute trust in your climbing partners. What does the best partner for you mean? What qualities, as a person and as a climber, must they possess?
I quickly see who I can work well with in the mountains and with who I can’t. Janez Jeglič, Franček Knez and I were lucky to have each other, all three of us came from farming and working-class families, and this connected us to each other. While suffering during our difficult climbs, we motivated ourselves with jokes and humour, which worked like fuel for an engine. We understood each other very well and knew each other even better.
To be a solid alpinist, you need to be equally strong both mentally and physically, and the easiest way to achieve this is by climbing in the mountains, which is the true domain of alpinism, as much as possible. Focusing only on training and becoming stronger and stronger is like skiing on grass.

They passed away exactly 20 years apart – Janez Jeglič died in October 1997 and Franček Knez in October 2017. Did their deaths change your attitude towards climbing and towards your relationships in climbing?
Yeah… It’s true… 20 years between Janez and Franček… In 1997 I was at the Banff Mountain Film Festival. And then in 2017 – Franček. It was hard, especially with Franček because at that time I was in Macedonia and when I came home I went straight to his funeral. It was hard to say goodbye, because if you have been with someone so often in difficult situations, it is hard. We had a hard life together – it’s like soldiers fighting a war, they are friendlier to each other then, than when they’re on the street or in the pub. If you experience these powerful moments together for such a long time, it becomes very difficult to say Goodbye… And at the same time I often catch myself thinking: “Why I am still alive and my friends had to go?” But life is like that, and you never know when your time has come.

What has helped you to survive over the years?
I don’t know. Maybe the right decisions. Climbing and mountaineering are like this – if you don’t push enough, you won’t succeed, but if you push too much, you may lose your life. The art of alpinism is to find this balance.

So how do you understand that you are on the edge, that there is a border that you are crossing and if you make another step, you may die? How do you understand where this boundary lies?
Maybe this helps: having a long climbing career, and often finding yourself in difficult situations. It is like, for example, when you have to solve a boulder problem. Look at Janja Garnbret for instance – why does she understand and read a boulder problem so quickly? It’s because she has so many kilometres of climbing under her belt, solving these problems again and again, for years and years. The same holds true for mountaineering. The same was with Franček and Janez. They had long, long climbing careers. I don’t know. Of course, luck plays a role, too.

Do you still climb Silvo?
Yes, because my house now is in Osp, the biggest Slovenian sport climbing area. I have cliffs 2 minutes from my house and I often go climbing. I can still do 7a sport climbs. Also, up in the mountains I still enjoy establishing some new routes. I do this almost every year. Not so much this summer to be honest, but in the previous years I climbed several new routes, looking for good rock in my home Julian Alps. This is something I enjoy very much.

Why did you decide to start a climbing festival in Slovenia and to dedicate part of your time to this?
Because I was quite young, back in 1984 when I first visited the Trento Film Festival, the oldest mountaineering film festival in the world. A film of ours was selected there in 1996, after which a film with Janez Jeglič about the South Face of Cerro Torre won an award. Later on I was invited to be a member of the Trento jury, and all that time I kept thinking why not organise a similar festival in Slovenia. We had a rich mountaineering tradition, yet nobody celebrated it with a festival. So we started in 2002 in a nice location – Bled. At that time though I was still quite active and I left the festival because I couldn’t dedicate the time it needed, then in 2007 I started again and now I’m preparing the 17th edition!

And now – do you plan any new expeditions or have you finished with the Greater Ranges?
No, no, I’m not planning on making any big climbs or expeditions anymore. But I am considering going down to Patagonia to do some easier climbs, and to just enjoy some lower peaks.

Have you still got a big dream?
I don’t have any plans that really push me, that I necessarily need to do. Now I just wait and see how things unfold. Mostly though I look for an objective that I can enjoy – some easier climbs, beautiful peaks, pleasant lines, something like that.

And this is what makes you happy now…
Yes, this makes me happy. And also if I have the chance to climb with some younger climbers, to share some of my knowledge with them. I am in that moment of my life when I can still help young alpinists quickly gain experience, like when I was young. It’s a kind of natural transferral of experience from the older to the younger generation. This is what I like to do now

During all this time he made many new routes, first free ascents, and speed climbs in his native Julian and Kamnik Alps, including mountain routes such as Zaumak Nerva (7c) that were the most difficult in the country at the time. At his peak he was redpointing 8a.

In 2007 he founded the Mountain Film Festival in Slovenia, which aims to increase the production of Slovenian mountain films and popularize mountain culture.

Franklin is poised to change into the following nice ‘Out of...

Dick’s Sporting Items (DKS) Inventory Strikes -Zero.21%: What You Ought to...