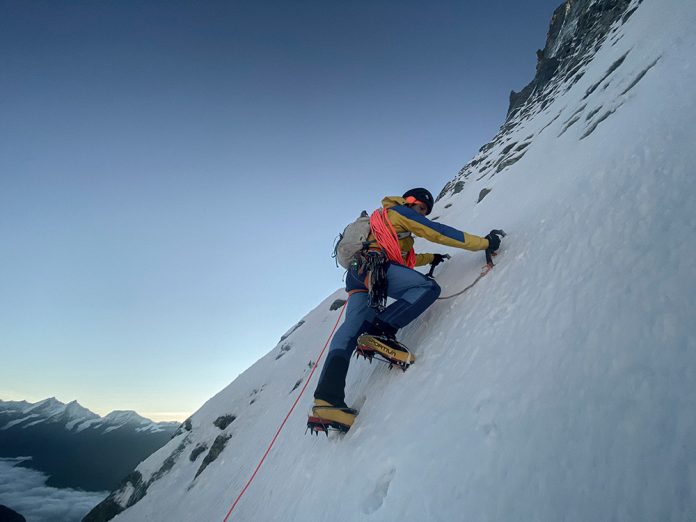 After Cima Grande di Lavaredo, Pizzo Badile and the Eiger, alpinists Simon Gietl and Roger Schäli have now climbed the Matterhorn via the Schmid route. To complete their North6 project, only two famous north faces of the Alps are still missing off the list: Grandes Jorasses and Petit Dru.

After unexpectedly having to sit out a day of bad weather, Simon Gietl and Roger Schäli successfully climbed the Schmid route on the north face of the Matterhorn (4478m). In doing so they have now climbed four north faces as part of their North6 project, which involves climbing the six most famous north faces of the Alps while traveling from one mountain to the next by bicycle.

The duo set off at the start of September by climbing Via Comici at the Cima Grande di Lavaredo, and then swiftly followed this up with the Cassin route on Pizzo Badile and Chant Du Cygne on the Eiger. They then headed towards the Matterhorn, cycling another 183 kilometers and gaining another 3080 meters in altitude while making the journey between Grindelwald and Zermatt.

On reaching their destination the weather was bad and after waiting for a day for the storm to pass, they made their way through the fog and rain to reach the Hörnli Hut at around 18:00. Twelve hours later they started up the Schmid route and the ascent, due to fresh snow, was considerably more complicated than expected. Swinging leads, they reached the summit at 18:00, then descended the Hornli ridge and returned to Täsch at 2 am.

Given that more storms are forecast in the near future, the two alpinists are already making their way to the France and the Mont Blanc massif where the last two chapters lie in store: Grandes Jorasses and Petit Dru.

Carabiner Knot | How To Tie Knot With A Carabiner

‘A schedule of rigorous train’ protecting an area group of hikers...

Penitente Canyon  Recreation Space: Geology, historical past, & out of doors...