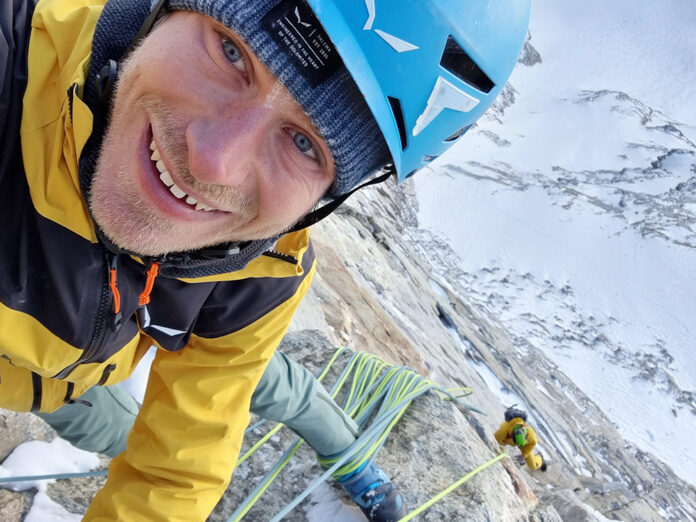 The report by Simon Messner who at the end of March with Martin Sieberer made the first ascent of Goodbye Innsbrooklyn, a difficult mixed climb up the North Face of Schrammacher in the Valsertal, Austria.

Valsertal on the outskirts of Innsbruck was held in the highest regard by David Lama who, after having established a multi-pitch in summer 2008 with Jorg Verhoeven, was the first to realise the valley’s potential for hard winter mountaineering. From 2012 to 2018 the Austrian established new routes in this freezing basin and after his untimely death, new routes have been added every winter. The latest creation was forged by Simon Messner and Martin Sieberer who climbed Goodbye Innsbrooklyn on the north face of Schrammacher. Messner reports.

At the end of March, Martin Sieberer and I established a very logical but very alpine first ascent on the righthand side of the Schrammacher north face in the Tyrolean Valsertal.

It took us four attempts, spread out over five years. We had to abandon our first attempt in the middle of winter 2017 because the steep granite slabs didn’t appear climbable for us in ice axes and crampons. We returned in late spring – this time armed with climbing shoes – but the face was soaking wet from the snowmelt, while the constant falling rocks forced us to turn back once again.

We planned to return in colder temperatures and so we stashed our wires, slings, carabiners and pegs for another try. However, when we ascended up through the Valsertal to the following year, the stashed gear was gone – since nuts can’t walk, I assume that the gaer was (unfortunately!) stolen.

In any case, this attempt also ended at the 3rd pitch because we didn’t dare climb any higher with only four pegs, three nuts and hardly any slings. The risk of no longer being able to retreat due to a lack of gear was too great. So we turned around, again…

End of March 2022, there had been hardly any rainfall worth mentioning in Tyrol and the Alps for an entire month – it was the driest March since records began. A catastrophe (!) for farmers, the melting polar glaciers and our climate in general, though a blessing for Martin and myself. The face looked dry and the cold March temperatures were ideal since they kept the numerous loose and sometimes car-sized granite boulders frozen to the face (or so we told ourselves).

Our strategy was as follows: skis for the approach, light crampons and ice axes for the ascent up to the base of the wall, climbing shoes for the lower part and a pair of mountain boots, crampons and ice tools stuffed in the rucksack for emergencies. A down jacket for the belayer, plus 800ml of liquid and two energy bars per person.

At half past three in the morning of 24 March 24 Martin picked me up in Innsbruck. Circa an hour later we were already skinning up towards Schrammacher and Sagwand, following the light of our headlamps. There, at the foot of the wall, we deposited our skis and changed to mountain boots, crampons and ice axes. Taking turns, we broke trail up the wide snow ramp that led us directly below the striking system of cracks and corners that towered steeply into the sky. What a line!

Since I knew the terrain better than Martin, I took the lead. On the second pitch I once again reached the point where you have to climb over a flake (VII). It’s an unpleasant place to be, since the hollow flake isn’t only used for progression, but also for placing a small camalot. I’d already made a belay and was watching Martin follow when he removed the Camalot from the crack, started to climb higher and… suddenly the entire flake broke off! Luckily Martin and our heavy backpack were tied into the rope from above. Had the flake broken off while I was on lead, things could have turned out rather different…

The shock was still in our bones because we knew that the next pitches would probably be just as loose, and also that the terrain would be even steeper. We had to be extremely careful!

The next pitch represented the crux : after a slabby sequence you have to climb across a shallow crack and past a rounded roof (VIII-). The last (and hardly confidence-inspiring!) piece of pro is a long way down. Martin risked it and… managed to breach this difficult crux without falling! Wow… the stars seemed aligned.

We continued following the obvious system of cracks and corner, we soon made rapid progress. We liked the fact that we were mostly able to climb in climbing shoes, and that the leader could climb with our bare hands. Although we no longer felt our fingers and toes because of the cold, climbing like this still felt much safer than with an ice axe and crampons, which the second carried in his rucksack.

After the 7th pitch, the angle began to ease off significantly and – hard to believe – we actually climbed into the afternoon sun. So the trembling at the belays came to an end, at least for the time being!

We climbed a direct line over granite slabs and boulders. In order to breach short firn steps, we used our hammer as a kind of emergency axe. For the most part, however, we were able to climb up rock. At around 4 p.m. we finally stood on the ridge between Schrammacher and Sagzahn. We’d done it, finally! A full five years after our first attempt and just a few days before I would leave Innsbruck and move to the South Tyrol with my girlfriend. I can’t think of a better farewell!

Kiwis’ private debt climbing as a result of spend on necessities

The nice outside in a pandemic: Smart County and Norton provide...

Nature trippin’ whereas tenting round Bengaluru- The New Indian Categorical