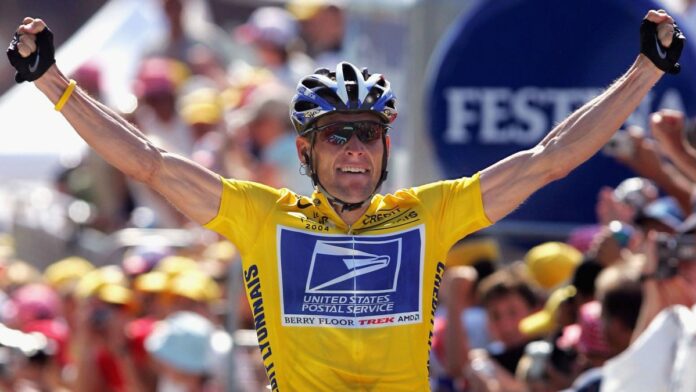 Neilson Powless came within a whisker of riding into the yellow jersey Wednesday and Thursday at the Tour de France in what would have been the first American yellow jersey in more than a decade.

Or would it havc been?

American cycling packs a controversial legacy with the Tour and the yellow jersey, and that’s putting it mildly.

Five Americans have worn the prized tunic across Tour history, but four of them have seen their legacies tainted by outright bans or doping admissions that put an asterisk on their palmarés.

Four have seen their names struck from the official record of yellow jersey holders.

Greg LeMond, the first American to win the Tour, is the only rider among the quintet whose legacy remains untarnished and is the only U.S. racer whose stints in the yellow jersey remain in the official Tour-backed history books.

Lance Armstrong, David Zabriskie, George Hincapie and Floyd Landis all wore yellow, but all four no longer appear as yellow jerseys in the official Tour history.

Some of their exploits, including stage wins and appearances, remain on the official register if deemed to have occurred before or after their admitted doping practices.

All four of their yellow jersey runs, however, have been deleted due to doping positives and doping admissions.

Armstrong wore the yellow jersey for 83 days during his career, and that was second on the race all-time list. But his Tour record of seven-consecutive Tour wins from 1999 to 2005 was erased in the wake of the 2012 U.S. Anti-doping  case that peeled back the depths of cheating during late 1990s and early 2000s.

Despite decades of other doping scandals at the Tour, Armstrong is the only former Tour winner whose name has been retroactively removed from the race’s official results in race history.

The official record for most victories now stands at five, a mark held by four riders: Frenchmen Jacques Anquetil and Bernard Hinault, plus Belgian Eddy Merckx, and Spaniard Miguel Indurain.

Other former Tour winners who later admitted to doping, or who were linked to doping scandals, including Denmark’s Bjarne Riis, German Jan Ullrich, and Italian Marco Pantani, still remain on the race’s official list of winners.

Landis won the 2006 Tour, but he was disqualified in the days following the Paris ceremony when anti-doping controls revealed he tested positive for testosterone. Because his doping ban occurred in real time, his name was officially struck from results sheet, with Spanish rider Óscar Pereiro being awarded the victory.

In contrast, the years coinciding with Armstrong’s seven Tours remain vacant on the official results sheet and without official winners.

Hincapie and Zabriskie also held yellow during their respective careers. Zabriskie wore yellow after winning the opening time trial in the 2005 Tour with a team directed and managed by Riis. Hincapie donned yellow in stage 1 early in the 2006 Tour.

Both riders later confessed to doping at periods throughout their respective careers. Like Armstrong, their results and their respective stints in yellow have been removed from the official results sheet.

Since 2006, American riders have struggled to match the exuberant success of the Armstrong era to win stages or hit the yellow jersey. Armstrong was within a fraction of a second of snatching yellow in his comeback Tour in 2009, but he lost out on the jersey based on tie-breaker rules, which granted Swiss rider Fabian Cancellara the honor.

Then-teammate Alberto Contador later attacked Armstrong in the Pyrénées, and the pair battled all the way to Paris, with Contador winning and Armstrong finishing third in one of the most notorious Tours in history.

Armstrong’s podium that year was also erased by the Tour organization as part of the USADA decision, and he retired in early 2011 under a growing cloud of controversy.

Since then, Tejay van Garderen was the American who came closest to yellow in stage 2 in 2018. Teammate Greg van Avermaet crossed the line just ahead of second-place Van Garderen in a team time trial to wear yellow.

Van Garderen twice finished fifth in the Tour, and retired in 2021 without coming that close to yellow again.

Powless’s fourth-place in stage 5 is the best stage result so far by an American in the 2022 Tour. Tyler Farrar of Washington State won a stage in the 2011 Tour, and he was the last American to win a Tour stage until Sepp Kuss bounded to victory last year in Andorra.

Powless came close to yellow. On Wednesday, only a late chase kept Belgium’s Wout van Aert in yellow after Powless rode into the day’s winning breakaway, and he climbed to second at 13 seconds back.

Had Pogačar not won Thursday, Powless would have been in yellow since he finished on the same time as the two-time Tour champion.

So is LeMond the last—and only—American to wear yellow?

If doping admissions and bans are the threshold, the first, last, and only American to wear yellow is still Greg LeMond.

The Greatest Gloves of 2023

Johnson Outside to Launch Fiscal 2022 Fourth Quarter Outcomes on December...