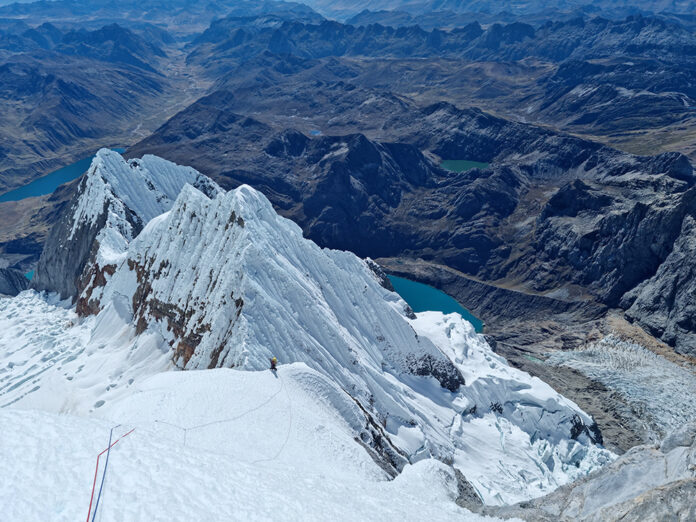 Spanish mountaineers Bru Busom and Marc Toralles have made the first ascent of the East Face of Siula Grande in Peru, climbing the inhospitable face in a single push from 11 – 16 July via their Ànima de corall. Toralles has described the line as ‘the hardest route we have ever climbed.’

The East Face of Siula Grande (6344m) in Peru is one of the most repulsive faces in the South American Andes and despite numerous attempts, it had never been breached in its entirety. In 2016 French alpinists Max Bonniot and Didier Jourdain made an extremely impressive ascent of the East Pillar and SE Ridge, but this avoided the central section of the East Face which has now been breached via a bold, weaving line by Bru Busom and Marc Toralles.

The Spanish mountaineers had attempted the face in 2019 with Roger Cararach but three years ago the trio had been forced to abandon its attempt after Cararach was struck on the arm by rockfall. Cararach was unable to return this summer and after a bivy at the base of the mountain, on 11 July Busom and Toralles set off and endured a total of 6 days “of great tension” before reaching the summit. The compact limestone on the lower section proved difficult to proceed and was exposed to rockfall, and the pair were forced to climb in the afternoon when the sun left the face or at night to avoid rock and icefall.

Toralles explained “We climbed the first part of the wall in big wall style, since the climbing was difficult and we couldn’t climb light. The second part allowed us to stop hauling the haulbag and continue alpine style, and with just a backpack each we were more agile on the very broken and loose terrain. A very beautiful ridge took us to the final section of the mountain from where, with tears of emotion, we managed to reach the precious summit.”

The pair descended down the same route. Toralles told planetmountain “It was a very tense descent due to the poor quality of the rock and the constant rockfall. Some of the stances were on loose anchors; while one of us rappelled, sometimes the other would not clip into the belay, just in case this gave way. This is the first time that I do not want to return to a route that I have climbed…“

Toralles summed up the route as follows “This is the most demanding climb we have done to date, due to the difficulty and exposure that we had to deal throughout the entire climb. The technical difficulties of the route are: 7b, A3, AI5, M6. We do not dare to quantify the commitment of the route, but in many moments our successful outcome depended entirely on luck.”

The major new addition has been called Ànima de corall and is “Dedicada a tots aquells que ens han deixat…”, dedicated to all those who have left us…

Future 2’s subsequent growth will give everybody grappling hooks on February...

Tonight on BBC 2. The story of Tom Ballard. …