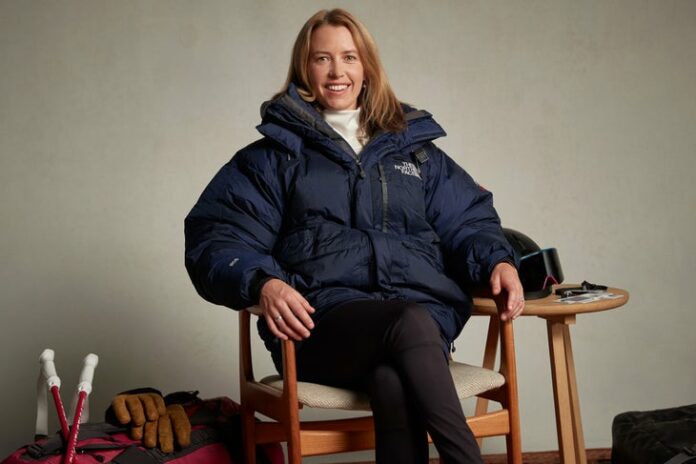 Ingrid Backstrom has spent a good deal of time “deep in the pow,” as she calls it. She’s brought ski stoke to the screen since 2004, when she appeared in Matchstick Production’s Yearbook. There were only a handful of women in ski movies before Backstrom’s big break. “It was very merit-based,” Backstrom says. “It was thought that dudes were the ones that came to the movies and only wanted to see women if they looked a certain way or skied at a certain caliber.”

Backstrom’s caliber of skiing lies somewhere in the stratosphere. She sticks every landing, nails every turn, and milks every face shot with power and grace. Skiing, specifically powder skiing, is her superpower.

Backstrom was literally born to ski. Her parents joined the volunteer ski patrol at Crystal Mountain, Washington, in the early 1970s before Ingrid was born. Every winter weekend, they’d camp in the Crystal parking lot with their three young kids—Ingrid, Arne, and Ralph—in a 1954 GMC van, dubbed the Bookmobile because it was once used to deliver library books.

Backstrom joined the race team at Crystal and later raced for Whitman College. “I really wanted to race, because that’s what the cool kids were doing,” she says. Then she moved to Palisades Tahoe and entered a freeskiing competition at Kirkwood. She loved the encouragement and camaraderie she found in that community. “Coming from the race world, which was all about pressure and nervously standing in the starting gate, I found a group that was dedicated to the fun of skiing,” she says.

Backstrom’s ski bum year turned into a decade at Palisades Tahoe, where she developed a close bond with Shane McConkey. “He was such a great mentor to me, like an older brother,” she says. Skiers would prove themselves under the KT-22 lift, where you were either heckled or cheered. Movies like G.N.A.R. and Hot Dog showcased the over-the-top vibe of the place. Backstrom continually turned heads with her skiing. “It was such a scene that the only thing you could do was to make fun of it,” she says. She loved the trickster silliness of locals like McConkey and the Gaffney brothers, who took their skiing seriously but with a huge sense of humor.

When Backstrom got into her first Matchstick movie, she and Sarah Burke were the only women in it. Except for a few powder shots, women were mostly absent from the screen. “You had to fit in with your looks, your skiing, or your ability to party with the dudes,” Backstrom says. “I had a big chip on my shoulder and wanted to prove that I wasn’t a wimp and that I could ski big lines.”

Backstrom went on to star in 20 ski movies and complete first descents all over the world, becoming one of the best-known professional skiers of this era. She’s now married to a former ski guide, Jim Delzer, and is the mother of two, a new adventure for Backstrom that’s documented in Lineage, a short ski film that follows her family on a road trip.

While family has been Backstrom’s priority in recent years, she’s still heavily involved in skiing. In fact, her most recent film project, The Approach, showcases her transition from being a star to playing the role of best supporting actress—an intentional move.

Here, in her own words, Ingrid Backstrom shares her ski lineage, where love and loss have intersected, and how skiing has been a way to connect with family and friends, especially when you’re deep in the pow.

My brother Arne was the best skier I’ve ever met in my life.

He passed away in a skiing accident over ten years ago. He was exacting in the pursuit to be better, but he knew how to have fun while doing it. Most of us err on the side of perfectionism, some on hedonism, but he was so clear on his morals that he could enjoy things without worrying if it was the right thing. My youngest brother, Ralph, who appeared at age 15 in Jeremy Jones’ ski-flick trilogy Deeper, Further, Higher, picked up snowboarding because he wanted his own thing, and he’s so powerful and talented.

I thought it was important to work through being afraid.

I got the opportunity to ski Denali, and it was super tough mentally. My brother died the year before, but I thought it was important to take the opportunity when it came. It was a huge learning experience for me and really hard mentally, but I’m glad I did it.

The freeskiing comp world was like a family away from home.

Some women wouldn’t tell you what line they were going to ski, but others were like, “I’ll tell you what line ran better in the past and what I’m going to ski.” It was uplifting, and many understood that if we all helped each other and collaborated, the healthy competition would lift everyone up, instead of a negative, competitive environment.

I felt lucky to be in those early ski movies.

And I thought, “I better keep my mouth shut or they might say stuff about me.” Guys would say things like, “We went out with a woman and she crashed on her first run,” or “She had her elbows out,” or “She didn’t party that much.” They only filmed women if they skied a certain way or proved themselves. You might get an audition if you met their criteria.

I was so naive in the beginning.

It was “go for it” all the time. I didn’t really know about avy safety, so I went on blind faith. I started to get more aware of what I was actually getting myself into. I didn’t want to speak up, because I didn’t want to seem like a wimp. But I’d be out there and scared and not contributing to the team, and that didn’t feel good either. Later, my friends and I started Safe As (Safeasclinics.com), initially just for women. For ten years, we’ve offered introduction-level avalanche safety courses in Washington, California, and Utah.

Becoming a parent is such a huge change.

My film project Lineage was a big experience in how it fit into my ski life. For me, Lineage was about exploring questions like “Do I still want to do this?” “Is it still possible?” Let’s bring the family along and find out. We had support from my parents and an awesome cinematographer. It was a fun way to get out there, shred, and see my friends.

With The Approach, we explored some problems of the ski and snowboard industry.

My friend and filmmaker Ann Cleary and I wanted to make a women’s ski and snowboard movie that didn’t perpetuate the status quo. We thought if we do it with a bunch of white women, we’re making more space for people who look like us. I had my mom, older ski racers, and other passionate skiers in the mountains who looked like me, but a lot of people don’t have role models that look like them. So, how do we incorporate a more diverse cast and crew and show the stories of people who are out there shredding? We let people tell their own story through the medium of skiing and snowboarding, which, hopefully, audiences can relate to.

Outside Business Summit Set for Oct. 25 at Mt. Princeton Scorching...

Sunny climate drives Vancouverites outside amid confusion round gathering guidelines

LEVY: Metropolis not imposing its anti-camping bylaws for parks