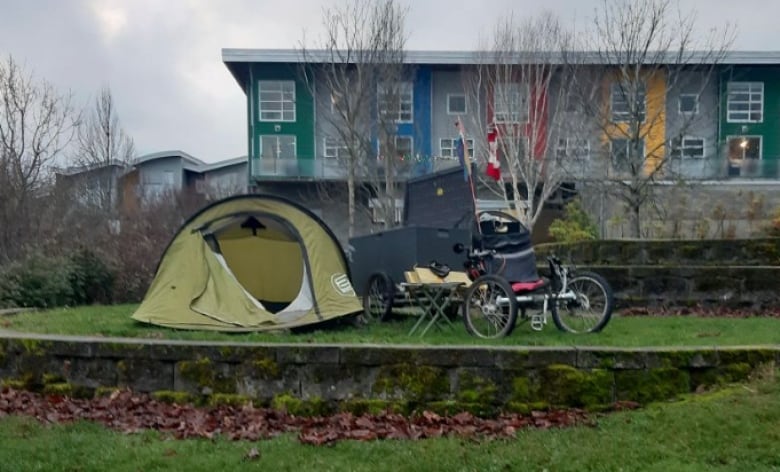 The rental crisis in southern Vancouver Island has led to unconventional housing for some students in the area.

Victoria’s rental vacancy rate of around one percent is a third of the Canadian average, while average rents in the city have risen more than 20 percent over the past six months, according to the National Rental Ranking released March 18.

It has prompted drastic action for students like Daniel Drury, a third-year business student at the University of Victoria, who bought a 1994 Ford Econoline van after being unable to find accommodation last autumn.

“I’ve reached out to five different landlords or people looking for rooms and I haven’t gotten any responses back,” he told CBC News. “I realized pretty quickly how difficult it would be to find accommodation.

“It wasn’t that I couldn’t afford it.”

Drury says he parks his converted RV overnight off-campus in Saanich — since the university prohibits on-campus camping — and pays $75 a month for an on-campus parking permit during the day.

He says he hopes to sell the van for a profit when he’s done living in it, and sees it as more of an economic opportunity than a necessity.

He also says he appreciates his quiet early morning coffee, which is made with a propane stove.

The interior of business student Daniel Drury’s Ford Econoline, which he converted into a camper to sleep off campus while studying at the University of Victoria. He hopes to sell the van in the future. (Daniel Drury)

“It’s obviously a steep learning curve to begin with, learning to survive without the basic amenities of a basement suite,” he said. “Once I got into the groove after a month, it was pretty smooth.”

But life is harder for other students like Rob Bulmer, who has been camping out in a tent in various locations to study at Camosun College for more than a year.

He says he can’t afford the current housing market and that camping isn’t easy.

“Picking up mail can be difficult, people just ask, ‘Where do you live?'” Bulmer said.

“You don’t necessarily want to have this conversation all the time.”

Bulmer and Drury aren’t the only students choosing camping life to study in the area.

Jalen Codrington, a writer for the University of Victoria’s student newspaper The Martlet, recently published an article about the pressure many students face when looking for housing.

“If students can’t afford to live anywhere while they attend classes, it really means we’ve hit an all-time low,” he said.

Camosun College student Rob Bulmer’s tent, where he lives off campus during classes, is seen with his portable trailer in a residential area in Victoria. (Rob Bulmer)

The university has 2,100 dorm beds, but most are reserved for freshmen. It is building two new projects for 621 students, the first of which is scheduled to open in September.

Helm says the university has been working with the district of Saanich on its new housing plan, which aims to achieve greater supply and better affordability.

Local ordinances prohibit sleeping in vehicles or trailers on the road. A spokesman said the district “understands that many residents are struggling to find affordable and suitable housing options.”

A spokesman for Camosun College, which has no on-campus housing, said the current market is making it difficult for many students.

The college’s student support office can help students who are in need, Rodney Porter said, and its student society operates an online database that matches students with landlords or roommates.

“The construction of on-campus student housing is a priority for the college,” he said, adding that the college has been lobbying the province to fund housing on its Lansdowne campus.

BC is funding 5,000 new beds for students at 11 BC post-secondary schools. However, a spokesman for the Department of Housing said the Victoria region “faces unique challenges” as one of Canada’s “hottest” housing markets.

“Students need access to affordable on-campus housing so they can focus on their studies, not their finances,” the spokesman said.

The city of Victoria did not respond to a request for comment on Friday.

Thrive in Intermediate Ski Terrain with These Ideas

🌱 Outside Recreation Is High Precedence + Physique Discovered In Boulder...

New certificates at VCU to offer college students with out of...

The COVID Outbreak on Everest Is Getting Worse