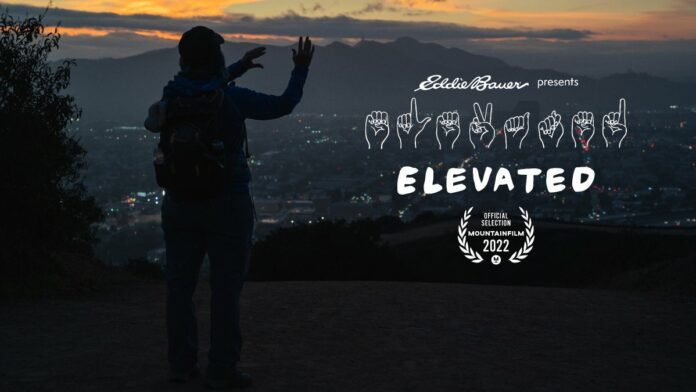 When Sonya Wilson climbs, you won’t hear her yell, “Take!” when she’s ready to be lowered down off the wall. Instead, Wilson taps her helmet twice, a sign that conveys to her belayer that she’s reached the top of the rock and is ready for the satisfying descent. This gesture is one of many signs that Wilson, who is deaf, uses to communicate with her fellow climbers.

For Wilson, finding a community among nonverbal climbers hasn’t always been easy. That’s why she created the ASL Climbing Network in 2012 for deaf climbers to connect with each other. In Elevated, a new release from Spruce Tone Films and presented by Eddie Bauer, filmmaker Palmer Morse shares how Wilson, an Eddie Bauer ambassador, advocates to bridge the gap between the deaf community and the outdoor industry.

Morse, who is learning American Sign Language but is not yet fluent, says it was one of the most challenging film projects he’s ever taken on. Elevated is an entirely nonverbal film, but Morse still wanted to play with sound, including capturing the noise Wilson’s hands make when she signs. He also carefully considered the musical score. “So often the score depends on a voice to establish mood, tone, and emotion,” Morse explains. “But with no voice, how does music drive emotion?” Ultimately, the score is upbeat, conveying the hope and excitement of Wilson’s work.

Morse, a climber himself, says that one of his biggest takeaways from the film is that verbal climbers can also use signs to interact on the wall. In some cases, such as when a belayer cannot hear a climber’s voice on an especially windy day,  it might even be safer to use hand gestures rather than yell down the wall. “When folks start to think about that, I think that’s when the light switch comes on,” Morse says. “Establishing modes of nonverbal communication through signs can benefit the climbing industry as a whole.”

Tourism took main blow in 2020, however the open air stored...