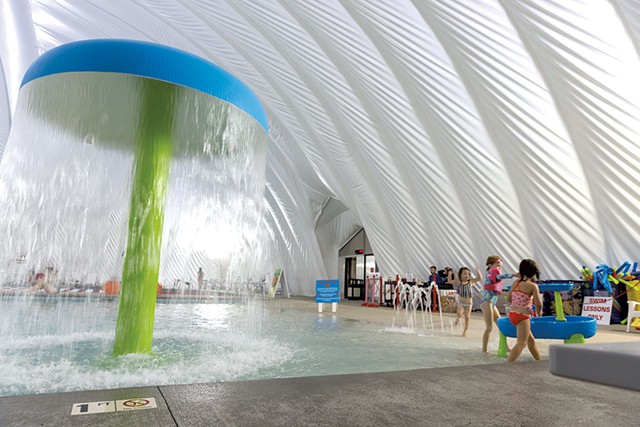 On a chilly late October morning, three cars were parked in the otherwise empty lot of the Hard’ack Recreation Area in St. Albans. In a matter of months, maybe weeks, the parking lot would be full and the echoes of chirping crickets would give way to the clatter of sleigh riders, skiers, and snowboarders on Aldis Hill, a popular winter destination for Franklin County families.

But this year, visitors aren’t just coming for the snow sports, but also for what one local described as the area’s “best kept secret”: the new Hard’ack Pool.

The new pool is not exactly mysterious. Funded by a $5 million bond issue that St. Albans City voters approved in 2021 to replace their aging pool on Aldis Street, the Hard’ack Pool was opened to mild fanfare in local media in June opened. But it wasn’t until late September that it unveiled its newest perk: the massive, glossy white dome that covers it in the colder months.

The inflatable structure helps keep the air at a steamy 85 degrees and the water at a relaxing 80 degrees – even in the dead of winter. This allows the pool to remain open all year round – a boon for local swimmers of all ages and abilities, from leisure loungers to racers.

St. Albans Recreation Director Kelly Viens said she believes the Hard’ack Pool is the only year-round municipal pool of its kind in Vermont. As she walked through an outhouse’s pressurized revolving door to give a reporter a tour of the pool as the hiss of warm air filled the room, she couldn’t contain her enthusiasm.

“You walk in here and it’s like ‘What?'” Viens said, laughing. “Because that pool was outside all summer; we used it; we love him. So when we walked in here with the dome up, we were like, ‘Oh my god, it’s like another world.’”

She pointed out the various amenities of the spa: the six-lane lap pool, the diving fountain, the fitness program area, the open-air swimming area. She’s particularly proud of the zero-entry, a gradual incline built into the pool for easier access that resembles the shoreline of a beach.

“It’s so great for accessibility,” Viens said, “and it’s great for little babies, too.”

There are fountains: small ones that squirt water near the ground, and a larger one in the shape of a mushroom. While their older children are at school, local parents bring their younger children along for a few hours of water play.

This is where Amanda Laber and her 5-year-old homeschooled daughter, Octavia, spend part of their mornings. When she signed Octavia up for private lessons, Laber found out there was a public swim time in the pool. Soon they came more regularly.

The pool is near her house, Laber noted. “It helps us get out of the house,” she said. “And it’s nice to be able to do something local and not have to go to Burlington or Williston.”

Danielle Kidder, her mother and their four young children traveled half an hour from Cambridge to splash around in the pool. The mild conditions under the dome make entry easy.

“The kids are really enjoying it,” Kidder said, referring to her 2-year-old son, her 4.5-year-old twin sons and her 9-year-old daughter, who they all homeschool. “It’s a good physical balance for them and they love to swim so this will help them keep up with their swimming skills through the summer.”

Kidder and her family have only been in the pool twice, but she plans to purchase a $400 family membership for non-residents and come more often.

In the evening of another day, older children were training for the St. Albans Sharks Winter Swim Team. They huddled around their trainer, Tommy Koldys, who wrote their moves on a whiteboard and talked them through their warm-ups in the six-lane pool.

Diagonal to his position at the head of the six-lane pool was Ann Hull, who had traveled to the pool from Enosburgh with her 14-year-old granddaughter Hannah, who has been swimming at St Albans since she was six.

“I taught Tommy as a kid,” said Hull, who has volunteered on the swim team for 16 years, first as a parent and now as a grandparent.

What if the dome wasn’t here? “My grandkids probably wouldn’t do it,” she said.

Melanie Dattilio agreed. She and Sandy Foisy, who both live in Georgia and have kids on their swim team, said having a year-round pool so close by makes all the difference.

“Now having a pool nearby is a big draw,” Dattilio said.

Foisy, whose children swam at the Greater Burlington YMCA in the winter and whose family now has Hard’ack Pool membership, added, “It was a lot less stressful being close to home.”

Viens estimated that the split between resident and non-resident visitors to the pool was “about 50-50” and noted that she and her team welcomed people from outside of Franklin County.

“They’ll say, ‘We just came from across the border in New York and we heard about it; we’re here for the day,'” she said.

Viens noted that these visitors came to take advantage of the Hard’ack Recreation Area’s many outdoor activities well before the cool weather and the dome installation.

“It’s just a beautiful place,” she said, pointing to the soccer field, dog park, hiking trails, disc golf course. “We have 95 acres of land here and having all of these options is amazing.”

As the sun went down, a steady stream of visitors entered the pool area. Some of the staff were walking around cleaning the floors or checking people in. Two associates, Bellows Free Academy-St. Albans students Noah Allen and Maya Marshall spoke about how much they enjoy spending their after-school time by the pool.

“I think I’m doing something that’s helpful,” Noah said of his position as lifeguard and instructor. Similarly, Maya said that working with children is greatly rewarded: “It’s nice to see them improve; They feel really good when they get better.”

Dee Christie, the water safety instructor administrator behind the front desk, echoed the sentiments of her colleagues and pool-goers. She highlighted the enthusiasm of the employees.

“We have a great team, a great community. I think we have some of the best instructors out there,” she said. “We’re very proud of what we do and I think it shows.”

Watch Adam Ondra try a 9a onsight at Covolo, Italy