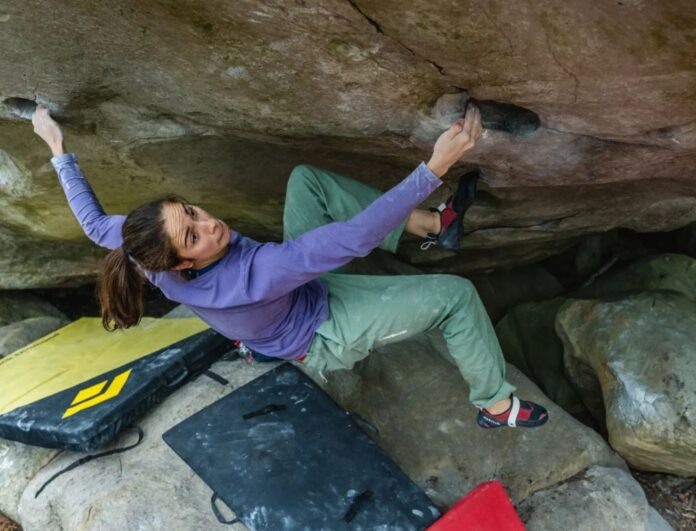 Staša Gejo has climbed her hardest boulder problem to date, the 8B+ Mécanique Élémentaire at Fontainebleau in France. The 16-move problem was put up by Sébastien Frigault at the Recloses sector and was shown to Gejo in early 2017 by Mélissa Le Nevé who was working the moves. In March 2017 Le Nevé sent the problem and, in doing so, became the first woman to climb an 8B+ boulder problem at Fontainebleau.

At the time, Gejo immediately realised that the “crazy looking traverse starting with the weird overhead heelhook” was too futuristic for her and consequently concentrated on sending her first 8A, Opium, which ends with the same aggressive swing. The seed had been sown though and the Serbian returned last year to try the problem, yet despite doing all the moves, she had to leave empty-handed due to rain.

Gejo is a hardened competition climber – in 2017 she won the World Games and was crowned European Boulder Champion while in both 2018 and 2021 she won bronze at the Boulder World Championship – and soon after the end of this season she returned to the ouskirts of Paris with Mécanique Élémentaire in mind. Three sessions a fortnight ago resulted in the 24-year-old falling off the final swing 5 or 6 times, while the send came about on last week. Her joy though was soon dampened by the loss of her grandmother that same day, to whom she dedicates her climb.

To date the hardest female ascent in Fontainebleau was carried out by Oriane Bertone who in May 2020 climbed the 8C Satan I Helvete low start.

House Sporting Items: Market Forecast to 2025 | Primarily based on...