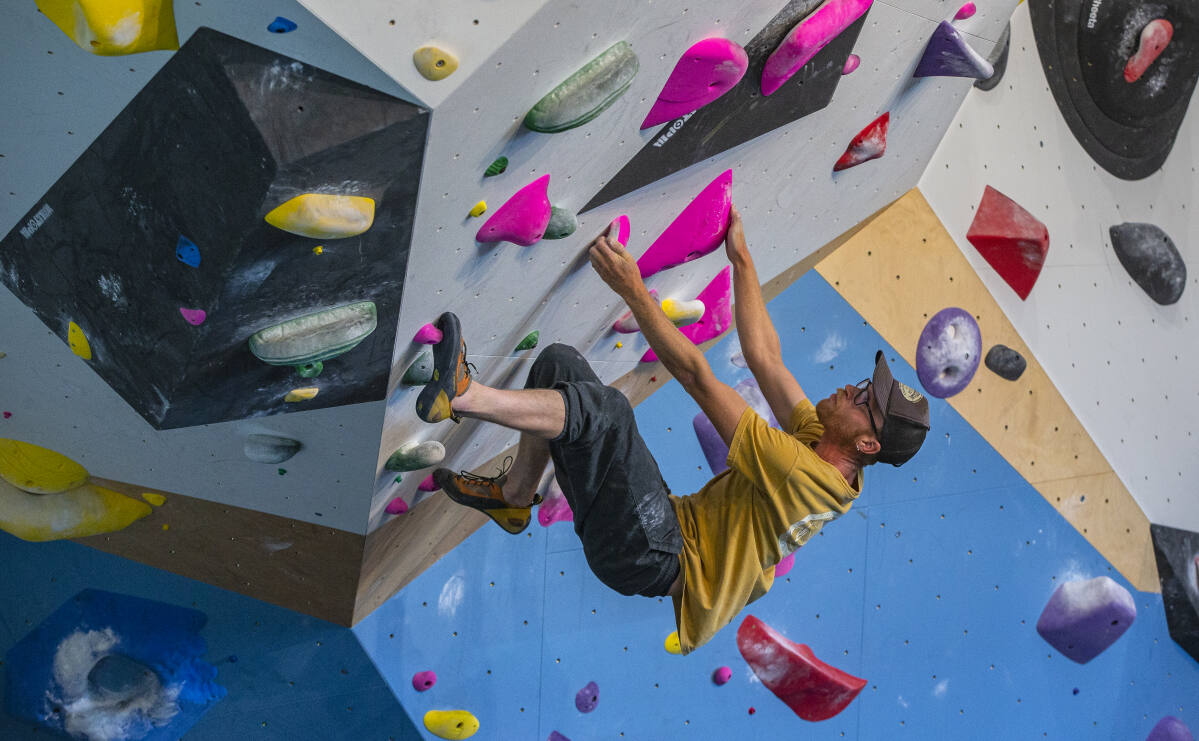 Saturday marks the grand opening of Session, the 28,000-square-foot rock climbing, yoga and fitness center on South A Street in Santa Rosa, founded by Jorgeson and his business partner Mike Shaffer.

“Founding Members” of the gym could use it during the Soft Opening, which took place two weeks before the Grand Opening.

As Jorgeson strode through the gym on a Wednesday afternoon, past the sculpted man dangling from a so-called kilterboard and the woman on a yoga mat holding the pigeon pose, Jorgeson radiated happiness — and relief.

To his left, a dozen founding members battled gravity in the building’s expansive bouldering area. In the rope area to his right, belayed climbers in harnesses followed marked routes to the top of the five-story building.

“It’s like we don’t own it anymore,” Jorgeson said. “It belongs to everyone else, and that’s such a satisfying feeling.”

It took Jorgeson and his climbing partner Tommy Caldwell more than six years to plan and execute the ascent of the 3,000-foot Dawn Wall, which until then was considered simply too steep and difficult to free climb.

But this epic challenge would prove straightforward compared to the difficulties Jorgeson and Session co-founder Shaffer faced in bringing this project to fruition, a quest that spanned seven years and survived multiple near-death experiences.

“This place is amazing,” said longtime climber Ed Henicle, who biked from his home in downtown Santa Rosa. “It’s so big, and look at all the natural light.”

Session is the first climbing gym in Santa Rosa since 1995 when the Vertex Climbing Center opened on Coffey Lane. It was there that Jorgeson honed his skills as a teenager and then worked as an instructor and chief route setter.

Like Jorgeson, many members of Session speak of Vertex with affection and respect.

But they are thrilled to have this new venue.

Where Vertex was at the cutting edge of technology in the 1990s, Eric Whitbrook remarked, “This is a state-of-the-art gym in the 2020s.”

He particularly praised the height and “fabrication” of Session’s walls — how they simulate outdoor terrain — and “the quality of the routing.”

In April, Session announced the hiring of Jeremy Ho, the climbing equivalent of Tom Brady, signed by the Tampa Bay Buccaneers, as chief route setter and head gym coach.

Ho’s task is to place a series of “holds” on the wall that create a variety of routes. He has set routes for 13 US national championships and was one of three American setters selected for the Rock Climbing World Cup in Salt Lake City last month.

Checking in climbers on Wednesday, Session staffer Alejandro Rodriguez praised Jorgesons and Shaffer’s “incredible attention to detail” – right down to the membership packages.

“They hand signed each one – about thousands of letters.”

OCD-level attention to detail is one of Jorgeson’s hallmarks as a climber. In that regard, he can be “a total control freak,” his wife Jacqui said with a smile.

But the rocky, unpredictable journey of designing and building a five-story building during a pandemic “Zenned him out,” she observed.

“This whole process was a lesson in letting go and releasing attachments.”

During this process, the main investor in the project withdrew twice. The second time, in the early stages of the Covid-19 pandemic, that investor was Kenwood Investments, of which Darius Anderson is CEO. He is also an executive member by Sonoma Media Investments, which owns The Press Democrat and other regional publications.

“I don’t blame Darius,” Jorgeson said. “It was COVID. We are climbers. We do not take risks that we believe we cannot manage.”

Brad Baker stepped into the breach. The Managing Director of SOMO Living, owner and operator of SOMO Village in Rohnert Park, Baker was already involved in the project. In the early stages, he agreed to purchase the South A Street property, which cost around $1 million, and lease it back to Jorgeson and Shaffer.

In addition to owning the land, he would be the lead investor in a project that will have cost around $9 million when completed, he said.

Session also had a personal appeal to Baker. After moving to Sonoma County in the late 1800s, his family once owned the lot where the building now stands, a few blocks north of the Baker Avenue overpass off Highway 101.

In addition to a fitness center, the mezzanine level includes an east-facing yoga studio whose wide windows offer beautiful views of the Mayacamas. Even before the grand opening, members posted pictures of the sun rising over Taylor Mountain on social media.

In the lounge below is a stunning image titled Sunset Over Sentinel Peak, a 3½ x 9 foot print taken by Dodrill, who captured this panorama after a day climbing with friends on the slopes of Mount Saint Helena Has .

One member of this crew is Eric Berghorn, a close friend with whom Dodrill has spent hundreds of hours climbing. Dodrill lives in Bodega; Berghorn in Calistoga. It has always been an ordeal for them to team up to explore the routes on Mount Saint Helena.

But session is about the same distance apart. Both were there Thursday morning, along with Morgan and a handful of others in their climbing tribe, “and it wasn’t even orchestrated,” Dodrill said.

“Having a gathering place like this where we can exercise and socialize – it’s incredible.”

To date, Jorgeson has seen members make new friends as well as renew old acquaintances. “Friends who haven’t seen each other for a long time hug like bears,” he said. “There are people who haven’t climbed in two years because of COVID, or in ten years because they’ve raised a family. This has now inspired her to get back into it.

“They dusted off their old climbing gear and are picking up right where they left off.”

This How We (Hike) Texas

Occasion to showcase space choices for outside fanatics | Information, Sports...