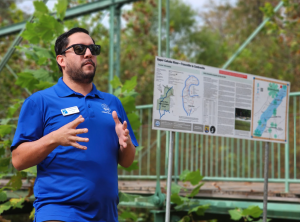 From reports by The Tribune staff

TRUSSVILLE — The Alabama Scenic River Trail met with state legislators and local stakeholders Monday on the banks of the Cahaba River in Trussville to highlight the importance of a statewide signage system that makes it easier for boaters to access Alabama’s waterways.

Senator Shay Shelnutt, Rep. Danny Garrett, Trussville Mayor Buddy Choat, Trussville City Council members Lisa Bright and Ben Short, and Cahaba Riverkeeper founder Myra Crawford stood at the creekfront in Civitan Park just before noon to celebrate during to learn more about the sign program at a ceremony. Also in attendance were employees, board members and volunteers from the Alabama Scenic River Trail.

Rep. Garrett spoke briefly about the role of outdoor recreation in recruiting and retaining a competitive workforce for and in Alabama. He serves on the Board of Directors of Alabama Innovation Corporation, which aims to advance innovation and entrepreneurship in Alabama for the 21st Century.

“Those kinds of efforts are going to be very critical to growing the state, keeping the workforce, and pulling people here,” Garrett said, citing the statewide Alabama Scenic River Trail signage program.

The Alabama Scenic River Trail is a 6,500-mile network of waterways designated for recreational use in Alabama. It is the longest single-state river trail in the nation and was designated a National Water Trail by the US Department of the Interior. The core section of the river trail, a 650-mile stretch from northeast Alabama to the Gulf of Mexico, draws top athletes from across the country each year for the world’s longest annual paddle race, the Great Alabama 650. 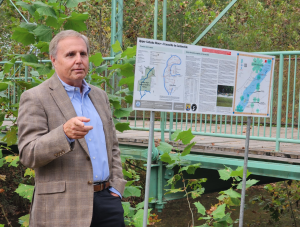 “Trussville provides many outdoor recreation opportunities for our residence, and the Chabaa River is a part of that,” said Mayor Buddy Choat. “The City fully supports any effort to advance the Cahaba River because the flow of the river begins here in Trussville.”

The Cahaba River section of the Alabama Scenic River Trail begins in Civitan Park in Trussville. A sign there marks the first in a series of access points to help paddlers explore this precious waterway. This sign is part of a network of signs spanning the state, helping kayak and canoe enthusiasts access the Alabama waterways in Trussville and beyond.

“One of our great missions is advancing Alabama’s waterways here and across the state,” said ASRT Acting Executive Director Andrew Szymanski. “One way to do that is to educate local residents about paddling opportunities in high traffic areas across the state of Alabama.”

Indoor mountaineering, an exercise for all | Hcnc