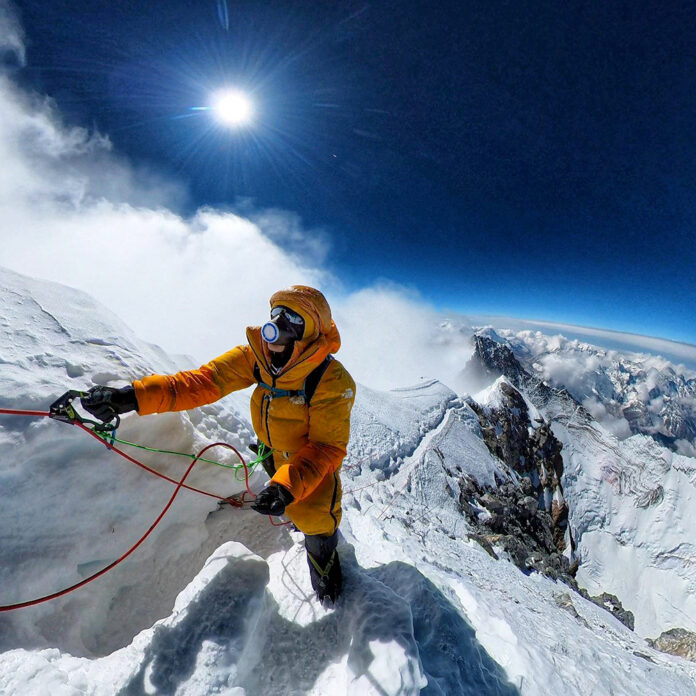 Interview with German alpinist David Göttler who at 9:45am on 21 May 2022 reached the summit of Everest without supplementary oxygen. This is the 43-year-old’s sixth 8000er, after Gasherbrum II, Broad Peak, Dhaulagiri, Lhotse and Makalu.

David: congrats! In all honesty, is this the culmination of a dream, or the end of a nightmare? Or perhaps obsession?
For sure I am very happy and grateful I don’t have to come back. That doesn’t mean I won’t come back… But its definitely a big dream come true!

You first climbed Mera peak, did some rotations up to 7900m, then descended to lower altitudes. How did this acclimatisation go? And how important is it both physically and psychologically?
Of course the process of acclimatisation is very important. But it’s a process that’s very individual and still I play around with different protocols and tactics to see what works best. I think in general we have still a lot to learn about how our body best gets used to the thin air. For me personally, I figured out it’s very beneficial when I descend to really low altitudes between rotations. So I always drop back to Pheriche at around 4300m to enable my body to recover, and even more importantly my mind, by staying in the beautiful Edelweiss lodge of my friend Lakpa Sherpa.

While you were down there others were up there summiting. How easy or difficult was it to play the waiting game, and sit patiently as they reached the top in perfect weather?
That’s never easy. Especially when people are going to the summit in perfect weather. At least, perfect for with oxygen. On the other hand, I knew how important it was for most of the people to have already summited when I wanted to go. And furthermore, I just wasn’t ready with my acclimatisation at that point. So I had to convince myself I had no other choice and had to wait just a little bit longer.

You mentioned a “by fair means” ascent. On Everest, how does this come about nowadays?
For me, “by fair means” is mainly no supplementary oxygen, because that’s the main difficulty on an 8000m peak. I always want to climb a mountain without artificial oxygen. Furthermore, I want to carry my own gear, because I want to be independent on the mountain. That’s how I learned how to climb first in the Alps and then in the Himalayas. Of course, if you are completely alone on a 8000er, it’s a completely different experience compared to being on Everest in the spring season. I had this on Nanga Parbat last winter with Hervé Barmasse, and on Shishapangma in 2016 and 2017. On Everest I could have said I’ll go for the same solitude and choose a different route, but this would immediately have resulted in an even smaller chance of success, and I said to myself that I was fine with “just” summiting via the normal route. Where I of course benefit incredibly from all the other people, and the fixed ropes. I knew from my previous attempts that even with these benefits, Everest without supplementary oxygen is hard enough and literally everything needs to be perfect in order to succeed.

The weather has been perfect! In fact, this has been an amazing season with almost 500 summits in the previous weeks. In the end, how alone were you during your ascent?
I was incredible lucky. On the lower part, you can always time your ascent in such a way that you are alone. For example, through the icefall, both up or down, I very often saw only 1 or 2 people. Sometimes even none. And on my summit attempt, I was even more lucky because I found myself in between a few other parties. So I was completely alone on the summit ridge and in particular on the summit. This was surreal and magical.

Before we touch on that, can you run us through the ascent?
I started on the 19th from EBC and went to C3, in the morning to avoid the heat and sun. Early on the 20th I continued up to C4 where I rested for a couple of hours. I’d left my sleeping bag in C3, and only took my tent, my stove and mattress. I melted snow and drunk as much as possible. At around 9:30 in the evening I set off towards the summit. It took me 12 hours and 20 minutes to reach it. On the same day, the 21st of May, I descended to Camp3. Here I pitched my small tent again and melted snow, and the next day I descend all the way back down to EBC.

So tell us about the summit. How long did you stay there? How hard is it to breathe up there? What were your thoughts?
Not super long. But the weather was perfect. Almost no wind; it was warm enough for me to wear only thin gloves. For sure most of the time I was busy with my breathing, but I had enough time to enjoy it up there, as well. I didn’t feel that relief or joy you might think, mainly because I knew I had to go down, and the first section over to the south summit has some tricky ups and downs. Even with the fixed ropes, those small ascents can be brutal up there. So I had huge respect for the mountain and was just focused on keeping going.

How hard was this summit compared to your previous 8000ers?
That’s difficult to answer. They are all so different. Some lower ones felt harder. Somehow I felt like I entered a flow state up there, perhaps because I was alone.

Last question David: how did the air feel now when you returned successfully to Everest Base Camp?
It felt so good. Not the air in particular but to know when you reach BC you have done it. That’s when you can really claim to have climbed a mountain. For me, you haven’t really climbed a mountain if you don’t manage to reach its base on your own accord. Yeah!

Out of doors tenting and sportswear retailer Kathmandu posts bumper 2021...

‘Fishing with Jay’ Brings Power and Environmental Consciousness to the Waters...