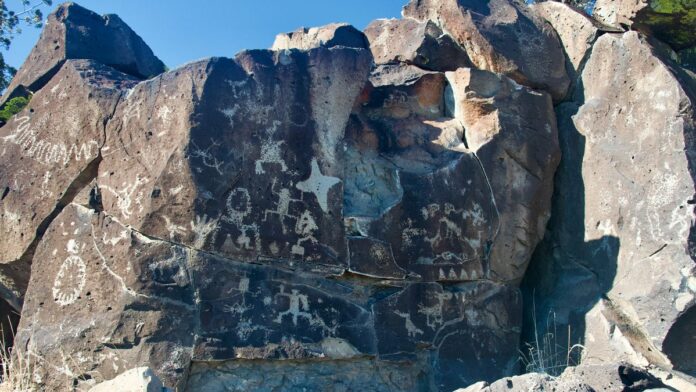 Just a short drive south of downtown Santa Fe, along the volcanic mesa above the Santa Fe River, lie the La Cieneguilla Petroglyphs, one of the most impressive rock-art sites in northern New Mexico. The thousands of drawings date from pre-contact through the Spanish colonial era, with some believed to be more than 8,000 years old. On January 18, officials from the Bureau of Land Management discovered that vandals had struck ten petroglyphs, defacing them with spray-painted images of pentacles, swastikas, and racial slurs.

Some words in Spanish were also scratched into the rock.

BLM spokeswoman Jillian Aragon said federal officials investigating the vandalism believe it likely occurred the day it was discovered. As of this publishing, no suspects have been named.

“We are actively investigating the defacement of these cultural properties and other crimes on all public lands,” said BLM Taos Field Office Manager Pamela Mathis in a statement. “We are asking for information and that families have a dialogue about protecting and honoring New Mexico treasures.” Under the Archaeological Resources Protection Act, those who deface cultural sites face up to two years in prison and a $20,000 fine per charge.

La Cieneguilla is easy to get to, which makes it more likely to be vandalized than remote petroglyph sites. A five-to-ten-minute walk on a well-marked trail will get you to the basalt cliffs from the parking area. Vandals struck the petroglyphs in the 1970s, 1980s, and 1990s. Still, La Cieneguilla’s pictographs are estimated to be 70 percent intact, with a high level of historic integrity.

Most of the petroglyphs at La Cieneguilla site were made by the Keresan- and Tano-speaking Puebloan people, who lived in large thriving villages in the region between the 13th and 17th centuries. The descendants of these communities, people from pueblos such as the Santo Domingo, San Ildefonso, Cochiti, and Santa Clara, still consider the petroglyphs an important part of their lives.

“This area is very sacred to the Pueblo people. We have direct ancestral ties to it, and our oral traditions, prayers, and stories are linked to these places,” says Ben Chavarria, Director of the Rights Protection Office and Tribal Historic Preservation Officer for Santa Clara Pueblo. “We go visit them on pilgrimages, for ceremonial reasons, and to teach future generations about our ancestors, traditions, and culture. We like to say that these petroglyphs are our footprints, and without your past you can’t have a future. So these sites give us a sense of identity. And they make us more resilient. They remind us of everything our ancestors endured and sacrificed to get us to the place we are today.”

La Cieneguilla’s extremely dense and diverse set of rock carvings comprises over 4,400 images within an area of less than a mile, pecked and incised along the top of the escarpment, in side canyons, across cliff faces, in alcoves, and on boulders. They depict a variety of otherworldly shapes, like complex geometric patterns, horned anthropomorphs, medicine wheels, and four-pointed stars, along with more-familiar natural forms, such as crescent moons, birds, peyote flowers, snakes, mountain lions, and fish. There are also numerous depictions of a humpbacked flute player known as Kokopelli.

“While it’s difficult to interpret the specific meanings and intentions behind these petroglyphs, they convey a deep connection to the land. Continuing to visit and think about them is one of the ways descendant communities maintain relationships with ancestors and with place,” says Dmitri Brown, a historian at the School for Advanced Research in Santa Fe, New Mexico.

According to reports, BLM’s field office in Taos ordered supplies to attempt to remove the paint, including soft, kitchen-type scrub brushes. While the graffiti takes just a moment to apply, it can take weeks to remove. Various techniques have been used to clean spray paint off rock art, and recently officials have used lasers with some success. Some of the damage is irreversible, though, because removing the spray paint or scratches would further damage the petroglyph underneath. Time is occasionally the only possible solution, as graffiti sometimes weathers off from the underlying rock carvings. But sites that are subject to graffiti are changed forever, and the more vandalism that occurs, the more a picture or historical site is damaged beyond repair.

Defacement of petroglyphs and graffiti vandalism are nothing new. At some petroglyph sites, there is historic “graffiti” by Spanish explorers who came to the area in the 16th century in search of land to conquer and settle. Signatures and dates from the 1920s and 1930s can also be found, made by men in surrounding ranches and villages as well as by tourists from the East Coast. Recent efforts by New Mexico SiteWatch, a volunteer network that monitors historic resources under the state’s Historic Preservation Division, have greatly reduced the number of destructive acts, even as public visitation continues to increase.

The past few years have seen other high-profile acts of vandalism. A climber in Moab bolted into thousand-year-old petroglyphs. Another petroglyph panel in the area was defaced with the phrase “white power.” Sites in western Colorado and Big Bend, Texas, have also been hit in recent years.

Tribal leaders believe the BLM could be doing more to protect these sites. “We need to have more funding, more monitoring, more guides, more enforcement, and definitely stricter penalties. We need more training, to inform the community to be advocates, to teach them respect and awareness of cultural competence,” Chavarria says. For him, protection comes down in large part to education. “It’s important to teach the public that the people who made this art long ago did not just vanish–their descendants are still here. These sites are still active cultural places for the Pueblo people. These sites still have a life force. It’s a privilege for the public to be able to visit them, not a right.”

Rising Up On the Street: Adventuring within the All-New Toyota Tundra