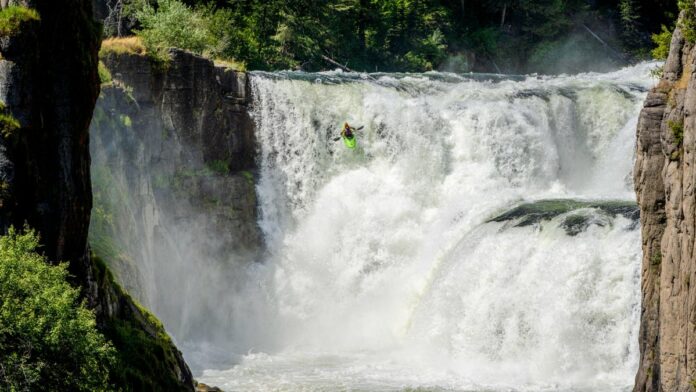 Lower Mesa Falls on Henry’s Fork of Idaho’s Snake River are well-known by expert kayakers. On one side, the river cascades 65 vertical feet over a cliffside, while on the other, it plunges 30 or so feet down into a gurgling pool of whitewater, which then empties another dozen or so feet to the river below. Kayakers either face two shorter drops, or one giant plunge.

On August 21, kayaker Tagert Mueller, 25, tackled both lines at Lower Mesa Falls, and you can see the images of his runs below. Mueller, who hails from Colorado’s Vail valley but lives in Bozeman, Montana, is a former ski racer who now focuses on kayaking. Lower Mesa Falls was the biggest drop Mueller had ever attempted, so he spent several weeks scouting the lines and preparing for the run. Mueller traveled to the falls with action photographer Jake Burchmore, and two other kayakers, to act as his safety crew.

“The biggest part was me getting into the headspace of knowing what I was getting myself into,” Mueller says. “I remember coming up to the falls, scouting the horizon line, and then just going for it and committing as hard as possible. If you don’t commit over it, you risk serious injury.”

So, what’s it like to kayak off a 65-foot waterfall? Mueller remembers the initial plunge from the top of the falls, and the maneuver he had to make after the first drop to navigate a protruding rock shelf about 20 feet down. “You come off the blind horizon at a little bit of an angle, and then use that shelf as a reconnect springboard, and that sets you down for the next 40 feet,” he says.

Mueller doesn’t remember much from the second part of the fall, only that he tensed his body up in preparation for the landing. He splashed down safely, checked his body for any bruises or strained muscles, and paddled away. The whole thing happened in a handful of seconds.

The drop represented a major step for Mueller in his evolving relationship with risk. In 2021 Mueller’s parents were seriously injured in a rock climbing accident in Italy—they survived but are still recovering, he says—and the incident made him reconsider his commitment to taking on dangerous outdoor activities. Boating Lower Mesa Falls required him to overcome fear. He visualized the drop multiple times prior to his run, and he was confident in his preparation and scouting prior to taking the plunge. But nothing, he said, could prepare him for what he felt the split second before going over the edge.

“I checked every box in my preparation and what lines I scoped,” he says. “And then I went off the lip and I remember thinking ‘Holy shit, this really is crazy.’ I think it was a cool experience to have done my due diligence as best as possible, and to still have been surprised by how scary it was in the moment.”