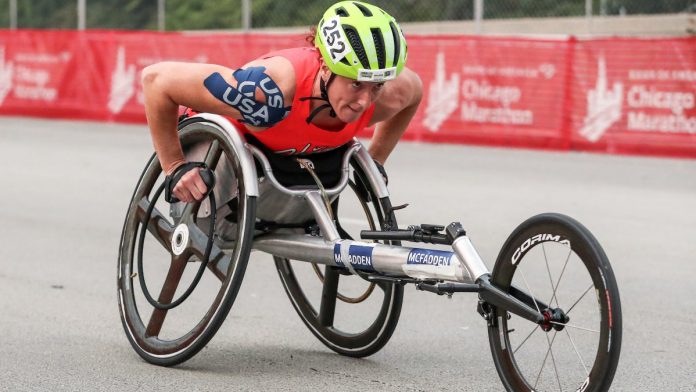 Like so many other competitors at Monday’s Boston Marathon, Tatyana McFadden hit the proverbial wall on the approach to Heartbreak Hill, the infamous ascent on the challenging course.

McFadden, one of the world’s top wheelchair racers, felt her arms and upper back searing with pain, and her mind drifted from victory to simply completing the race. Manuela Schär, the eventual winner, was nearly 15 minutes ahead, so McFadden soaked in the cheers from the thousands of roadside spectators as she pushed toward the finish.

“When the pain sets in your body like that, it just goes to your mind, and it’s like ‘I just want to see the finish line,’” McFadden, 32, said in an interview. “I haven’t experienced pain like that in such a long time, and the fans helped out a lot.”

Heartbreak Hill sits at mile 20 on the Boston route, which is often when a marathoner’s muscles, lungs, and spirit are in need of a boost to complete the 26.2-mile race. For McFadden, the ascent actually sat at mile 46.2 of an even larger challenge.

McFadden had started the Boston Marathon less than 24 hours after she won the Chicago Marathon, with a whirlwind day of recovery, travel, and preparation squeezed between the two iconic events. In the hours after she won the Chicago Marathon, McFadden and her mother, Deborah, packed her racing wheelchair in the lobby of a hotel. She then sped to the airport and boarded a flight for Boston, where she landed at 5 P.M., only to race across town to complete a COVID-19 test and attend the pre-race check-in. Throughout the trip, McFadden was gulping down food and fluids to fuel her body for the Boston Marathon.

“We were just trying to stuff calories down her throat after Chicago,” Deborah McFadden said.

After unboxing her chair and gulping down some pizza and yogurt, McFadden went to bed early. The transport bus to the start line left at 4:15 A.M.

“My recovery was a hot shower and taping my muscles with some kinesio tape at the points that were the most sore,” said McFadden, who said she also put her legs in an inflatable Normatec recovery sleeves to aid her recovery. “There wasn’t much time for anything else.”

When her back-to-back marathon day finally ended, McFadden had pushed her body to its limit twice, and collected a victory and second-place finish, all in a span of about 25 hours. The most stressful element of the journey, she said, was waiting to see if the airline delivered her competition wheelchair on time.

“It’s not like we can just pack an extra pair of shoes in our suitcases and be OK if our bag doesn’t show up,” she said. “You kind of just pack it up and pray that it makes it onto the flight.”

McFadden’s ambitious racing schedule was a product of the unique 2021 marathon season, in which many high-profile races were rescheduled because of the pandemic. This year, the six World Marathon Majors are squeezed into a six-week window during the fall, with the traditional springtime Boston and Berlin marathons slotted in alongside the October and November dates for Berlin, Chicago, and New York City.

The Tokyo Marathon was called off, and replaced with a virtual race-from-home event.

The compressed schedule has created an enticing one-of-a-kind endurance challenge for a handful of athletes. Retired pro Shalane Flanagan is racing all six marathons with the goal of completing each one in under three hours. Ultrarunner Michael Wardian raced Chicago and Boston, and documented his races and travel day on Instagram.

“This was a once-in-a-lifetime challenge,” McFadden said. “What the heck? This will never happen like this again, and I can actually do it and succeed, and be one of the only people to do all of them.”

It’s the latest personal goal for McFadden, whose dominance over wheelchair racing over the last decade has brought up comparisons to Serena Williams or Roger Federer. The six World Marathon Majors are the crown jewels of the sport, and McFadden has notched 24 victories at these races since 2009, scoring the rare Grand Slam—winning Boston, Chicago, New York City, and London in the same year—on four occasions.

She’s won 20 medals at the Paralympic Games—eight of them gold—and more than a dozen victories at the International Paralympic World Championships. McFadden has also become the face of her sport, and an outspoken advocate for Paralympic competition.

Her 2009 lawsuit against Maryland’s Howard County public school system granted disabled athletes the opportunity to compete in interscholastic sports. And this summer, McFadden’s incredible story—she was born in Russia and lived in an orphanage until she was 6—was featured in a Netflix documentary on the Paralympic Games titled, “Rising Phoenix.”

Adam Bleakney, a retired wheelchair racer and McFadden’s former coach, called her one of the most influential paralympians of all time. “Her dominance on both the road and the track positions her among the greatest of all time,” Bleakney said. “Importantly, she’s leveraged the notoriety she achieved through her many successes to increase awareness, to educate, and to undercut stigmas commonly associated with individuals who have a physical disability.”

McFadden hopes the compressed 2021 racing schedule will propel her back into dominant form for 2022. Losing the 2020 season to the pandemic marked a major setback, she said, because she was unable to race her way into top form. This summer McFadden wasn’t her dominant self at the Summer Paralympics, and she earned a silver and bronze in individual competition, before winning a gold medal as part of the U.S. team in the 4×100-meter relay.

“I’m an athlete who thrives on competition because I learn from my competitors,” she said. “I need these marathons to get back on the swing of things to see where I am and where my competitors are, so I can make changes accordingly.”

McFadden finished second to Schär at the Berlin Marathon on September 26—her wheelchair was lost in transit and showed up the day before the event. The following weekend, McFadden was third in London. She wraps up her season in New York City on November 7.

McFadden also hopes her challenge brings more of a spotlight to wheelchair racing. While wheelchair athletes complete the 26.2-mile  distance faster than runners—McFadden’s winning time in Chicago was 1:48:57—they encounter similar pain and suffering during the race. Cuts and blisters on an athlete’s hands can cause excruciating pain with each revolution, and the physical act of pushing a wheelchair makes arms and back muscles throb.

McFadden cut herself during the Chicago Marathon, and the wound bled and stung throughout her effort in Boston. But the cut, the travel, and the muscle pangs were simply part of the challenge.

“Because you’re using your arms, it’s a much smaller muscle group compared to the legs,” McFadden said. “Honestly, it’s so hard.”

Boys & Women Membership of Dane County to present away $1M...

15 State Economies Most Depending on Outside Recreation