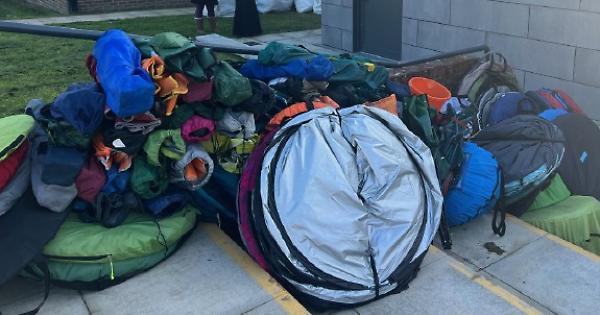 THE organizers of a used camping gear sale in Caversham Heights have sent the unsold gear to Pakistan to help victims of the floods.

All equipment was recovered after the Reading Festival by members of the Warren and District Residents’ Association and included tents, chairs, sleeping bags and inflatable mats.

It was put up for sale on the pitches of Mapledurham for a day.

About 30 percent of the equipment was sold, with the remaining 70 percent donated to people in Pakistan’s devastating flood-hit Sindh province. The association also sent bags of food, medicine and clothing donated by visitors to its weekly pavilion coffee morning.

Elisa Miles, the association’s chairwoman, said: “Because of the flooding, they have nothing. No home, no place to sleep, no clothes. It’s also getting cold there now and they need food, medicine, clothing and hygiene items.

“Ukraine dominated all the news and Pakistan was talked about very briefly before being dumped.”

This is the 10th year that volunteers have salvaged camping gear from the festival. Ms Miles said: “We used to have a very bad working relationship with the festival organizers because of the noise and traffic it caused and the inconvenience it caused our residents.

“It changed when we started talking to them and we were able to get better traffic management, better security for our area and more ticketing opportunities in exchange for volunteering.

“Over time, it has grown into a great relationship.”

Volunteers are now allowed onto the Little John’s Farm festival site, where it took them two days and more than 12 hours to salvage the leftover equipment using flatbed trucks. This year they collected over 100 chairs and over 50 tents, some worth up to £250.

Both Ms Miles and her husband have different theories as to why such valuable equipment is left behind every year.

She said: “He thinks if four or five people are staying somewhere for two nights £250 isn’t all that much money so they don’t mind leaving. I think they’re so hungover and exhausted from their boisterous weekends that they just forget it.”

The sale raised around £470, which will go to the community cafe and help cover the cost of renting the pavilion.

Crank Up Your Climbing: Ben Moon Teaches the Arduous Redpoint