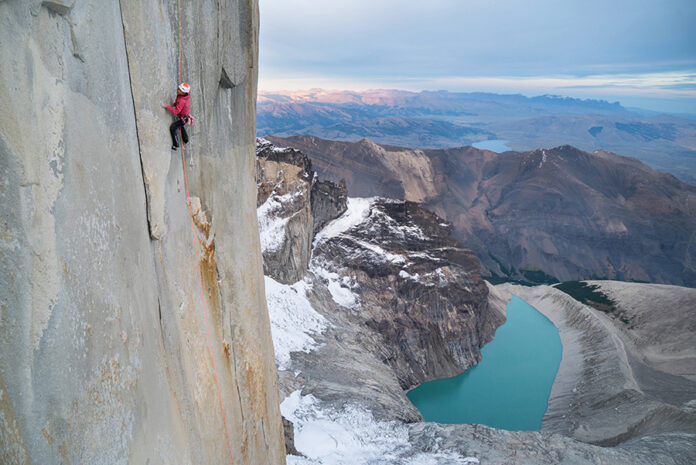 The video of Brette Harrington, Mayan Smith-Gobat and Drew Smith in 2017 attempting to make the first free ascent of Riders on the Storm, the world famous big wall on Torre Central in the Torres del Paine massif in Patagonia.

In January 2017 Brette Harrington, Mayan Smith-Gobat and Drew Smith attempted to complete the first free ascent of Riders on the Storm, the hugely famous route on the East Face of Torre Central in the Torres del Paine massif in Patagonia. Pioneered over a stormy three-week period in late 1990 and early 1991 by the Germans Kurt Albert, Bernd Arnold, Norbert Bätz, Peter Dittrich and Wolfgang Güllich, the 1000m line is considered a true crown jewel of big wall climbing in Patagonia.

Originally graded VI 5.12d A3, the route was repeated in 2006 by Nicolas Favresse, Olivier Favresse, Sean Villanueva, Mike Lecomte and Philippe Ceulemans. Although the strong Belgians ultimately failed to free the line, they did make significant headway and important new free sections were deciphered.

In 2016 Ines Papert, Mayan Smith-Gobat and Thomas Senf free climbed new sections up to 7c+ and discovered a detour to surpass the infamous blank wall, but bad weather set in and they did not get a chance to free this variation. As mentioned, Smith-Gobat returned with Brette Harrington and Drew Smith the following season.

Harrington explains “Our attempt resulted in five weeks of grueling effort to get the rope up the wall. We encountered constant storms of snow, and 100km/h winds. Using ice climbing and aid tactics, we arrived at the five pitch variation, and had just two days of good weather to work on freeing them.

I discovered a hanging corner, with a technical slab which I equipped with a single bolt and a piton. While Mayan and I both managed to do all the moves on all the pitches, we did not have the chance to complete them due to ensuing storms.

We hope to come back to the climb but there has been significant rock fall down the line over the past three years. Due to the warming and variable climate, it is currently not safe to return.”

UIAA Ice Climbing Fee confirms a number of updates to the...

Necessities on your subsequent tenting journey

Dick’s Sporting Items Vacation Hustle Sale gives as much as 50%...

The way to Draw Carabiners Climbing Step by Step