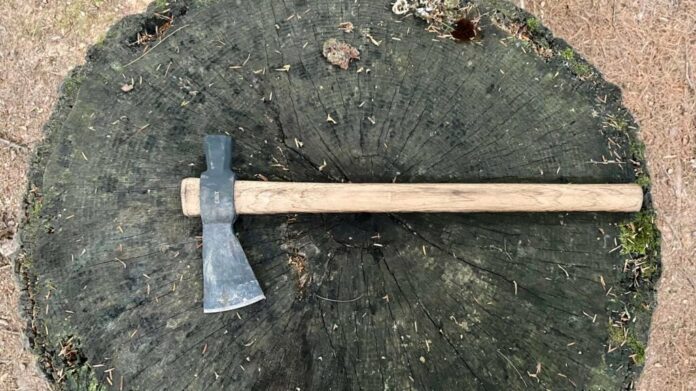 Turning a log into kindling might be the single greatest camp task. It’s a straightforward job: take a large piece of wood and reduce it to several smaller pieces of wood. Then burn it. It’s satisfying in the same way that mowing a lawn is satisfying: you can chart your progress and see what you’ve accomplished. But just because it’s simple doesn’t mean it’s easy, and the task requires a specific tool—an ax that’s burly enough to dig into a hardwood log, but not so beefy that you can’t be precise. A mid-size ax is ideal; heavier and with a longer handle than a throwing hatchet so it can produce force, but still nimble enough for close work. Enter CRKT’s new Chogan Hammer, a “multi-tool” that CRKT claims is “part hammer, part ax, all badass.”

Ok, I made up the “all badass” part, but it’s true. I took the Chogan on a recent camping trip where afternoon thunderstorms soaked my family’s stock of firewood, and I knew I needed to whittle them to pieces in order to find the dry wood inside. To be honest, I didn’t think the Chogan was up to the task. I’ve used a number of ax/hammer combos in the past, from Walmart cheapies to legit tools from respectable brands. They all did a fine job at hammering tent stakes (it ain’t that hard of a job, after all), but failed to bite into proper firewood logs. Inevitably, the problem with these combo axes is their size: they’re typically pint sized, too light weight and too short of handle to create serious striking force. They’re more hammer than ax. But the Chogan is an ax first, and a hammer second, with a 1.78-pound 1055 carbon steel ax head that slides onto an 18-inch Tennessee hickory handle. It looks like a large tomahawk and feels substantial in your hand. The mid-range size of the ax makes it particularly useful, because it’s large enough to wield with two hands if you need to split something sizable, but light enough to work with a single hand if you’re making smaller, more precise chips.

Anyway, on that rainy camping trip, it was  imperative for me to start a roaring fire. We weren’t going to die or anything—we could just sit in the truck with the heat on if we got too cold—but I could tell that morale was at a dangerously low point and mutiny was at hand. We needed S’mores, pronto. The only thing to do was start carving those logs up. The Chogan proved wonderfully capable in this scenario and I quickly reduced them to dry shavings. S’mores were had by all.

I’m particularly fond of the ax’s handle, which is made from a dense hickory that did well under constant abuse. It was dark when I was chopping the firewood, which resulted in a number of mis-swings. I’ve broken many ax handles in similar conditions, but the Chogan’s came away practically unscathed. That bodes well for its future, because I plan to bring this baby on every car camping trip in the future.

My only complaint about the Chogan is that it doesn’t come with a leather sheath. As a hammer, the Chogan made quick work of my six-person family tent’s 72 stakes (maybe a slight exaggeration), but my wife pointed out that it’s not particularly safe to wield an ax like a hammer when little kids are running around the tent site.  She had a point. You can buy a sheath from CRKT for $25, but I would rather it was included with the Chogan for a higher price.

Am I being petty? Probably. Particularly since the Chogan Hammer is priced at a budget-friendly $60. That’s cheap for an ax of this quality. And can you put a price on the joy of reducing big pieces of wood into smaller pieces of wood and setting them alight? Not in my book.

US Out of doors Recreation Merchandise Market Dimension and Forecast to...

Famend Creator, Feminist And Thinker bell hooks Has Died. She Was...