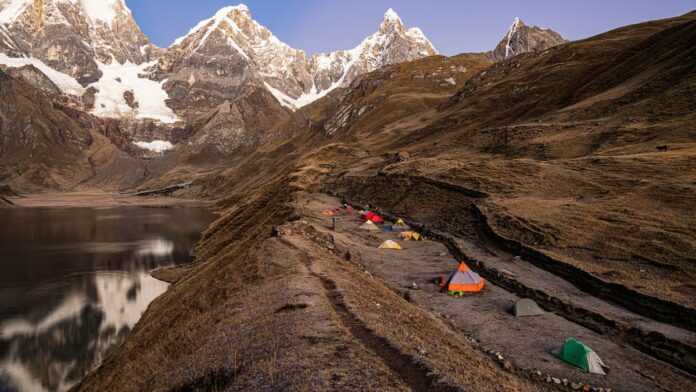 The Cordillera Huayhuash is a remote, stand-alone cluster of mountains in Northern Peru containing seven peaks over 19,000 feet. This tight group of peaks is firmly off the radar of most international trekkers, many of whom opt for more popular, hence congested, hikes like those of Nepal’s Annapurna Circuit or the Torres Del Paine Circuit, in Patagonia. The latter offers a few appointed huts, while the Huayhuash is raw wilderness, with no huts. Darcie and I, from Maine and New Hampshire respectively, had opted for a six-day trip focused on the northern half of a large trekking circuit. Our variation, while over fifty miles and with four passes at 15,000 feet or higher, is doable in two weeks, door to door. (The full eighty-mile circuit is more difficult to accomplish for someone with limited vacation time.) This version is a selection of high points and the most scenic vantages of all. At even the first peek of the snow-white, toothy Huayhuash, Darcie said, “This is unlike anything I’ve ever seen.”

I first heard of the Huayhuash Circuit, as it’s colloquially named, after seeing the 2003 film Touching the Void and subsequently reading the book of that name. In 1985, descending in a storm from the difficult first ascent of the west face of Siula Grande, a 20,800-foot peak here in the Huayhuash, Joe Simpson fell, breaking his knee. His partner, Simon Yates, doggedly managed to lower him on their rope almost all the way down the mountain. Yet as they neared the base, in the wind and whiteout conditions, Simpson was accidentally lowered over a cliff, reaching the end of the rope still in midair. Above, Yates was slowly being pulled from an insecure stance, requiring a decision: Cut the rope, or both die. Amazingly, both climbers survived, but Simpson, believed to be dead, crawled alone over five miles to camp, showing up five days later. Little did I know when reading the gripping story that nineteen years later I would camp beneath the peak myself.

Tenting in a comfortable state park cabin on the Oregon coast:...