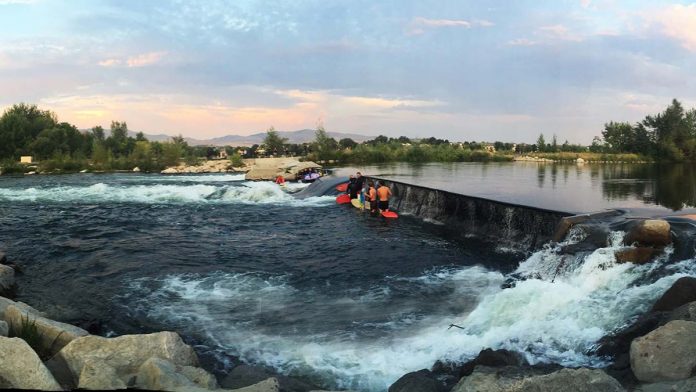 Earlier this summer, the city of Montgomery, Alabama, broke ground on a new addition to its downtown: a whitewater park. The $50 million project, which is expected to be completed by summer 2023, will be located on a 120-acre parcel along the shores of the Alabama River, with a recirculating wave park suited for kayakers and paddleboarders.

It’s just one of several new whitewater parks popping up around the United States. A destination is also under construction in Great Falls, South Carolina, on the Catawba River, as an extension of Charlotte’s Whitewater Center. It’s set to open by 2023. New England is getting its first location: the 13-acre Mill City Park will open this September in the former mill town of Franklin, New Hampshire, with a bike pump track, climbing walls, and whitewater features.

“Whitewater parks have revolutionized the sport by bringing the best of remote mountain kayaking to the center of the city,” says Scott Shipley, a former World Cup kayak slalom champion and three-time Olympian who now runs S2O Design, a whitewater design and engineering firm out of Lyons, Colorado. Shipley estimates there are more than 70 whitewater parks around the United States, with around ten more currently in progress.

Here’s why that’s good news: If you want to try it out, it just got a whole lot easier. Until the advent of these manmade training grounds, which came about in the mid-1990s and use engineering to manufacture surf waves and other river-like features, whitewater kayaking was a sport reserved for the far-flung and risk tolerant. Now, people from Boise to Oklahoma City can paddle a river downtown and learn to roll a kayak with help from a qualified instructor or guide.

“Destination lessons can help you learn from the best,” Shipley says. Here are some spots to get your roll on this summer.

Take a kayak lesson, sign up for a swift-water rescue course, or paddle a raft at the Nantahala Outdoor Center’s 500-acre campus along the Nantahala River, on the border of the Great Smoky Mountains. On-site lodging (from $80) includes cabins, rooms at the recently renovated Dogwood Motel, and private hostel-style bunkhouses alongside Appalachian Trail thru-hikers.

Bet you didn’t know downtown Oklahoma City had Class IV rapids. Yep, the recirculating whitewater park at Riversport Rapids has mellow to rowdy wave trains suited for a wide array of experience levels. If you’re just getting started, sign up for a kayak roll lesson or private or group kayaking lessons. You’ll also find raft adventures for the whole family (for kids ages eight and up). There’s no lodging on-site, but the park partners with several local hotels (ask for the “boathouse rate”).

The Boise River flows through downtown, and the Boise Whitewater Park has become a playground for surfers, stand-up paddlers, and kayakers playing on an adjustable wave. The park, which is run by Boise’s Parks and Recreation Department, first opened in 2012 on a section of previously neglected river that was littered with industrial debris. The park’s features have been updated and expanded since then.

Known as one of the better river surf waves in the Midwest, Charles City Whitewater first opened in 2011 on a quarter-mile section of the Cedar River through Charles City’s Riverfront Park. It has three beginner-friendly wave trains that serve as the site of an annual kayak surf contest. Pitch a tent near the river at the R Campground (from $20), from which you can rent a canoe (from $18).

Tubers, kayakers, and surfers flock to the Bend Whitewater Park on a section of the Deschutes River in Bend’s Old Mill District for surf waves and good times. Three separate channels on the river provide an option for everyone: the fish ladder has mellow waves for tubers and kids, the whitewater channel is suited for experienced paddlers with four distinct waves, and the habitat channel is for migratory wildlife and is closed to the rest of us. This section of the river was previously impassable for paddlers and fish due to an underwater dam structure that was removed when the area was redeveloped into a park in 2015.

Don’t own any paddling gear? That’s okay. You can rent kayaks, canoes, paddleboards, and tubes nearby to float or paddle the San Marcos River through the rapids of Rio Vista Park, about a half-hour south of Austin. This spring-fed river remains a stable and comfortable 70 degrees year-round, making this spot popular even in winter months and at night, when lights shine upon the park. In 2006, the city of San Marcos converted this dam into a whitewater park with three main rapids. Olympic paddler Ben Kvanli teaches clinics and river tours here, and the local Lions Club rents tubes and runs a shuttle for the river.

The Arkansas River is a legendary kayaking and rafting destination about three hours from Denver. The Buena Vista Whitewater Park, one of Colorado’s biggest whitewater parks, with five wave features, gives you a chance to test your skills before you drop into the natural Class III and IV rapids elsewhere on the river, like the Numbers or Browns Canyon. Stay at the Surf Hotel (from $245), which is part of the vision of pro kayaker turned entrepreneur Jed Selby’s South Main district.

Amid the flashing-bright casinos of downtown Reno, you’ll find a calming riverfront paradise known as the Truckee River Whitewater Park. This half-mile stretch of the Truckee River has been transformed into a series of Class II and III rapids, perfectly surfable even for new kayakers. Sierra Adventures leads guided tours and offers instruction. The nearby Whitney Peak Hotel (from $284) has an indoor bouldering gym and a 164-foot outdoor climbing wall on the side of the hotel.

Outside specialists: Plan forward to keep away from progress’s influence

What You Missed: Ski Resorts Reliant on Snowmaking for Thanksgiving