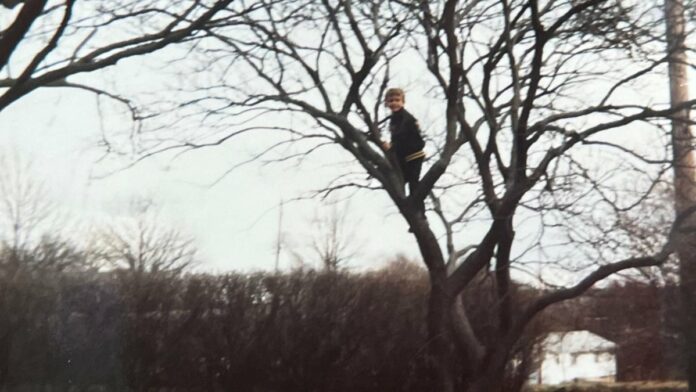 In the late 1980s, right around the time I was climbing trees all summer in Iowa, R.E.M. recorded a song called “It’s the End of the World as We Know It (and I Feel Fine),” and Billy Joel recorded “We Didn’t Start the Fire.” Both are songs with rapid-fire stream-of-consciousness lyrics that include name-checking events and historical figures, capturing the frantic anxiety of the speeding up of the news cycle and the creeping dread of the then four-decades-long Cold War. Both songs used to give me a specific feeling—that the world moved fast, and was going to move even faster, and not necessarily in a good direction, and all we could do was try to keep up. I haven’t pressed play on either one of those in a long, long time, because I get that same feeling nowadays every time I check news feeds or social media on my phone or laptop. It’s been a challenging time to hang on to hope, let alone make art, or feel justified in dreaming about going on a bike tour or skiing.

Plenty of days, when daily life has to include considerations of wildfire smoke, record heat, a pandemic, a drought, and continued violence, I have to remind myself that people have gone through hard shit before and that, in other parts of the world, people are going through hard shit that’s different than mine, and likely way harder. The flu pandemic happened during a five-year World War. I read psychiatrist Viktor Frankl’s memoir Man’s Search for Meaning, and other books on the Holocaust, and imagine what it must have been like to survive Auschwitz, not knowing how long it would go on for—months or years—knowing that any day a Nazi soldier could take your life on a whim, and that even if you survived the camp, Nazis might rule the world. I know you’re not supposed to minimize your problems by comparing them to someone else’s, but some days, remembering that perspective helps me a bit.

I used to wonder how people could have kids at a time like this, and then I would wonder how long people had been saying things like “How could people have kids at a time like this?” It seems like society, essentially, has always been Going Through Some Shit. Maybe in the past, when news traveled at a much slower pace, it was easier to blissfully forget about everything for a while and focus on what was right in front of you. For a couple years, I had my favorite forest near town, where I didn’t get a cell signal and my dog slowed my pace and lowered my blood pressure when I watched his tail wag, nose shoved into a bush, sniffing hard. When we lost Rowlf in late June, it took a few weeks for me to go back to my favorite forest without him, and even longer to not be sad as I walked the paths there. But it still beat the shit out of scrolling through Twitter.

When Hilary started talking about maybe having a child, or at least “trying,” as people say, and seeing what would happen, sort of putting it in the hands of the universe, or biology, or whatever, I had lots of thoughts about it: how it would change my daily life, how I would manage the balance of being a dad along with everything else I was doing, how I could mess it up pretty much every hour of every day for the rest of my life, the fact that I didn’t exactly gravitate toward kids (or ever even really try to hold babies). It was the boldest thing I could imagine doing, and I felt underqualified for the job and maybe unjustified in applying for it. But if I turned off the worrying part of my brain, the idea of assembling a library of kids’ books, introducing a tiny person to the music I love, and walking around in the woods at less than a mile per hour with a dawdling kid sounded like a kind of fun I didn’t necessarily want to miss out on.

Lately, I’d been feeling like I might be starting the descent of the U-curve many people experience in their forties, whether that was from two-plus years of a pandemic, midlife, a feeling of Is this all there is? or something else. I wondered if my parents, in the late 1970s, had worried about having kids at A Time Like This. I wondered if, after you have a child, you just wring your hands about it less because you’re too busy trying to keep a kid alive—or maybe you become less pessimistic about the future, because you have some not-so-metaphorical skin in the game and you have no choice but to hope for the best. The kid has no choice about coming into the world, after all. I wonder how in, say, 2045, a hypothetical child of mine and Hilary’s would feel about our decision to create them. What would the forests look like when the kid was my age? Would there be any trees left? Or was I thinking about it the wrong way and the kid would be a metaphorical tree we planted, in hopes that it would make the world a little bit better?

When I emailed my friend Devin that Hilary and I were expecting a baby boy in mid-2022, he replied with enthusiastic congratulations and wrote, “I think having a child is the most optimistic thing a person can do—at least it was for me.”

Climbing information tumbled to her demise on California mountain after late...

This Carabiner Keychain is Constructed to Final: Introducing the Trayvax Carabiner

Brewer leaders present new outside train gear for public use