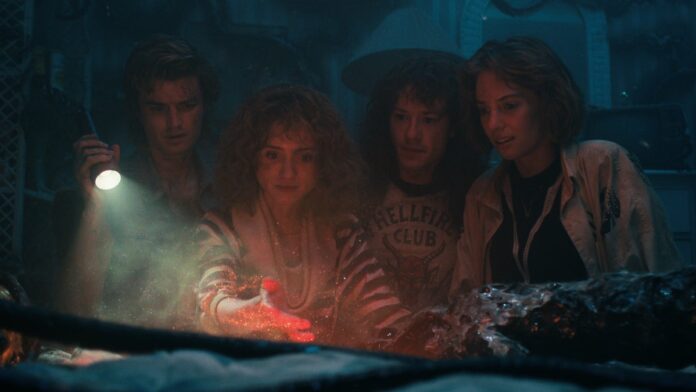 If you’re a fan of Stranger Things, you’re familiar with the Upside Down—the hellish parallel universe where the show’s beloved troop of teens venture in search of monsters and dark forces. For those unfamiliar, picture a perfect replica of the real world (in this case, Hawkins, Indiana) gone sour. It’s full of red lightning, screaming bats, and creepy vines that come alive and strangle you. The most recent installment of the show spends more time down there than any seasons past. This gave us time to overanalyze the main characters’ equipment decisions. Spoiler: they’re questionable (granted, the kids are 15 years old, and the year is 1986). If we were headed on a Vecna-slaying adventure today, we’d make some changes to the Upside Down kit.

In Season Four, the gang figures out that they can use flashlights to communicate across worlds with their newest villain, Vecna. When he’s close by, the bulb lights up. But it’s pretty inconvenient to hold a flashlight when you’re tiptoeing around murderous vines. Turns out, the perfect hands-free lighting solution was just coming into vogue in the 80s. I don’t blame the Hawkins crew for not getting their hands on Petzl’s very first headlamp. But if I were heading down to the Upside Down now, you can bet I’d have the brand’s Swift RL snugged tightly around my head. This one gets up to 900 lumens, for peak effect when Vecna is near, with a smart-light setting that auto adjusts the brightness to your surroundings—clutch on dusky trail runs, and probably also in dimly lit attics and stormy underworld forests. Plus, if the split-back head cradle is secure enough to avoid slipping on technical terrain, it’s surely secure enough to stay put during a fistfight with misguided basketball bros back in real-world Hawkins. —Ariella Gintzler, associate gear director

There are a lot of tentacles in the Upside Down. Creepy-crawly, extra slimy feelers litter the landscape as part of the Vecna’s hive mind. If you’re unlucky enough to run into one, your odds of getting snared, subsumed, or suspended from one of these things is high—just look at Steve, Nancy, and Robin’s amateur sneak-attack in the season finale. If it were me mounting a covert-op on Vecna’s stronghold, I’d bring the Silky Bigboy 2000 Folding Saw. I’ve used this handsaw on countless trail-clearing missions in the North Cascades. With a whopping 14.2 inch curved blade and 5.5 teeth per inch, the Bigboy can handily saw through eight-inch-thick branches—way thicker than the average Upside Down tentacle. When you’ve freed yourself from Vecna’s clutches, the saw folds down to a manageable 16 inches to slip into the side pocket of whatever ill-advised military surplus backpack you might be wearing. —Benjamin Tepler, associate gear editor

One of the most dramatic moments of the last season of Stranger Things was Robin and Nancy’s realization that listening to your favorite song can break you out of Vecna’s trance. They use this strategy to great effect when Max gets hypnotized by the monster while visiting her brother’s grave. Lucas puts Walkman headphones on Max that are playing the Kate Bush jam “Running Up That Hill,” her favorite song, and she’s able to access good memories that create a way out of Vecna’s world and back to her friends arms in waking life. If I had to go into the Upside Down, I would take my Bose Sport Earbuds to blast “Running Up That Hill,” which is now my favorite song. They’re lightweight and secure so they won’t fall out while running from demented bats or getting strangled by a stray tenticle. —Luke Whelan, senior editor

Remember when Bob thought he’d made it back safely from the lab crawling with mini-Demogorgons, only to get viciously, unexpectedly mauled right in front of Joyce Byers. I know, this technically doesn’t take place in the Upside Down, but after watching something like that go down in the Stranger Things universe, I wouldn’t take any chances. Enter: full face protection. Smith’s Mainline Helmet has so far withstood a full season at Big Sky’s bike park that included more than a few tumbles. My noggin has never felt more secure. In fact, this helmet is almost too secure. It takes me a few seconds of wiggling and a good amount of upward force to take it off at the end of the day. There’s no way Vecna’s  weirdly long fingers are nimble enough to remove it from my head so he can suction me into his death army. If that saves me another thirty seconds for Steve Harrington to come to my rescue, I’ll take it. —Kelly Klein, associate gear editor

Is anyone else tired of seeing Dustin’s too-full backpack flop around as he runs all over Hawkins and the Upside Down? The guy carries everything his team needs in there—radios, snacks, that baby demogorgon dog. He simply needs more structure. Enter Osprey’s Metron, a 26-liter bike commuting pack with enough capacity for Hendersonian hauling while providing more security. It has minimalist chest and sternum straps to eliminate dreaded bag wag during all-out sprints and underworld bike journeys. It also has compression straps to tighten the load to your back and an integrated rain cover that I bet would fend off exploded monster goo (I wasn’t sure how to test for that). It even has a laptop sleeve for when his genius girlfriend Suzie makes her first portable computer. —Will Taylor, gear director

$18M In Recreation Funding To Improve ‘High quality Of Life’ In...

Wyoming Out of doors Recreation Collaboratives to Meet in Lander

Oil slips under $61 with greenback climbing and OPEC+ assembly forward