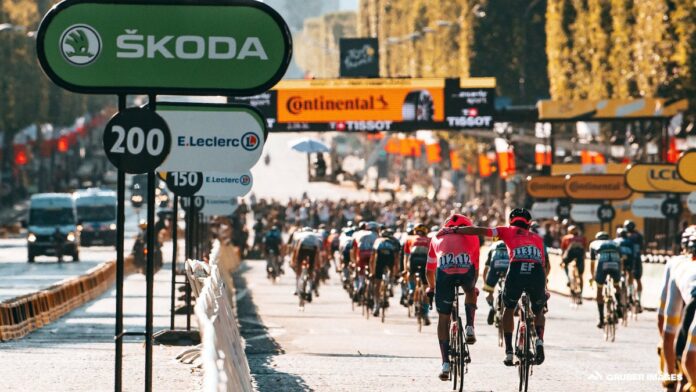 This piece originally appeared on CyclingTips.

We see you. We see the strain you are about to be put under. We know—and you, Google, you know too—that as the premier stage race of the year, the Tour de France is perhaps the only cycling event to transcend the sport’s bubble and cross over to a mainstream audience.

That’s excellent, because cycling as an activity is wonderful, and as a sport it’s the most beautiful in the world. But there are some uniquely confusing things about the Tour de France, and new fans – quite understandably – have some questions.

And when you’ve got Tour de France questions, who do you ask? Google, that’s who. But while everyone is OK Googling questions, nobody asks if Google is OK—so in the lead up to this year’s Tour de France, we are here to help.

These are the questions the internet has about the Tour de France.

Put your feet up, Algorithm. We’ve got this.

That’s the first question you have?! Really? Good grief.

Yes. It is an ordinary human function that is consistent across all humans, even Tour de France riders. If they did not, they would be very uncomfortable for the duration of the race. Maybe they’d even die. I don’t make the rules.

Generally not, although I’m not going to say ‘never’.

Typically, riders in need will pull over to the road side in an organised fashion, kind of angle-parking themselves next to a field or guardrail, before letting it rip. This usually happens in a détente in the day’s proceedings, where the pace slows enough to allow the urinating riders (the peeloton) to return to the main group (the peloton).

If a rider is caught out with a sudden tingling urge or the pressure is on, they may drift back in the bunch and take a rolling wee, with some assistance from teammates—either to help them balance or to pace them back.

There has been recent commentary from certain riders that the bathroom etiquette of road cycling has gone out the window, with Peter Sagan memorably describing the flurries of urine he battles through as “total anarchy”. True story, true quote.

Oh, we’re back here again? Sure. I love that for us.

Usually, they do it on the side of the road during quiet moments, but for reasons of privacy they might dismount and head for a ditch (as modelled by the aforementioned Peter Sagan here):

A rider will usually make it through the stage without being struck by the urge, but not always. Sometimes, that will make a rider the butt – hur, hur – of everyone’s jokes (à la Tom Dumoulin). Sometimes, a rider will be struck down with explosive diarrhoea (à la Greg Lemond), as the following memorable passage shows, from Richard Moore‘s excellent ‘Slaying the Badger: Greg LeMond, Bernard Hinault, and the Greatest Tour de France’:

“It was 60, 70 kilometers to go, and I took a peach,” LeMond says. “About 10 km later, I went to a teammate, ‘Pass me your hat.’ He was like, ‘What?’ I said, ‘Pass me your hat, please.’ ‘What do you want my hat for?’ ‘Pass me the goddamn hat!’ “I shoved it down my shorts; it didn’t feel like it was going to be diarrhea, but oh, my God, it was so severe. I just felt the shorts go woooooop! And it fills my shorts, then slowly dribbles down my legs into my shoes. I mean literally, it was dripping into my wheels, it was flying off the spokes. And then everyone separated off from me. We were single file, we were going hard, and I was cramping, my stomach.”

What Makes the Tour de France so Special?

Nah, it’s been around since 1903 and attracts the biggest audience, televised in 186 countries. It has the biggest prize money and the most prestige, and because of that, it’s the most attractive to sponsors of the sport. That makes for a bit of a self-fulfilling prophecy, making the Tour all but untouchable.

Also, it is exceptionally beautiful.

Are Women Allowed in the Tour de France?

No, although there have been several women’s-specific Tour de France equivalents over the years, including a one-off as far back as 1955, and, from 1984-2009, an event under a shifting cast of names (the Tour de France Féminin, Tour of the EEC Women, Tour Cycliste Féminin and Grande Boucle Féminine Internationale).

2022 is particularly exciting because it’s the debut of the Tour de France Femmes avec Zwift – an eight-stage women’s Tour de France, starting in Paris on the same day that the men’s race finishes, run by the same organisers. It’s long overdue, and it’s going to be awesome.

No. They typically have earpieces in one ear, but they are used for communication with their team directors or with other teammates. They do, however, listen to often terrible music in their team buses in the morning before each stage.

How Many Gears Does a Tour de France Bike Have?

Bike tech is constantly evolving and some of the minor teams may be still on older equipment, but the majority of riders would be riding bikes with two chainrings at the front and 12 sprockets at the back, making for a total of 24 gears.

As noted above, some teams may still be on rim brakes, but the vast majority will now be using disc brakes. Ineos Grenadiers were the sole top-tier team still using rim brakes but they have been riding discs throughout the 2022 season. Defending champion Tadej Pogačar sometimes uses rim brakes on big mountain stages, as they allow for a lighter bike.

Where Do the Tour de France Riders Sleep?

In hotels, usually with two riders to a room. Sometimes those hotels are nice. Sometimes they are miserable Ibises. It is a nightly lottery.

Yes. The Tour de France is three weeks long and they are exercising very hard throughout. They need to sleep.

Not nearly as much as Tour de France journalists and spectators.

Please enjoy this handy guide to the stages and route of the 2022 Tour de France.

If I’m being obtuse, there are many signs at the Tour de France, often saying things like ‘Tour de France’, Skoda, LCL, E Leclerc, Continental, and Krys.

But I think what you are really asking about is the crash on stage 1 of the 2021 Tour de France, where half the peloton was brought down by a spectator, greeting her grandparents with a sign reading ‘Allez Opi-Omi!’. Which means “Go grandpa-grandma!” in a hybrid of French and German.

It was a whole thing.

There are a lot of crashes at the Tour de France, big and small and usually several times a day. But I think most Googlers are probably pounding the algorithm for the one we just mentioned above. Tour de France crash was caused by one woman’s love for her grandparents.

What Time Does the Tour de France Start?

This world has many time zones and I wouldn’t dare presume which one you are in, but here is a useful guide for how to watch the Tour de France on live TV or streaming platforms, wherever you might be.

What Is the Tour de France Time Trial?

For the purposes of this year’s Tour de France, the time trial is an individual race against the clock, where all riders ride the same course, with staggered start times, trying to post the lowest possible time. For these stages, they use more aerodynamically efficient equipment and special time trial bikes and there’s no drafting allowed.

How Long Is the Tour de France?

21 stages, and – usually – two rest days. This year, because the race starts in Denmark, there is an extra transfer day on July 4 as the whole show picks up and moves from Scandinavia to France. The dates this year are Friday 1 July – Sunday 24 July.

How Many Kilometers Is the Tour de France?

Tour de France: How Do They Pee?

The riders wear bib shorts, with straps over the shoulders, which makes undressing complicated. As such, there are two main methods that can be used – flopping themselves over the waistband and hoping not to kink the hose, or the more daring ‘down the leg’ method.

If you’re doing this on the move – from personal experience as a bored teen on country roads when nobody was around other than some very confused cows – the risk is high and the reward is low.

Yes, he will be at the Tour de France. No, he will not win.

Where Does the Tour de France Start 2022?

Copenhagen, Denmark – a great city that is conspicuously not in France, but I won’t hold that against it.

Why Is the Tour de France Starting in Denmark?

Are There Any American Teams in the Tour de France?

There are two American-registered teams in this year’s Tour de France – Trek-Segafredo, and EF Education-Easypost. They look like this:

Who Won All Three Grand Tours?

Only seven riders have won the Giro d’Italia, Tour de France, and Vuelta a España in their careers:

Who Has Won the Tour de France the Most Times?

That is a surprisingly fraught question. Lance Armstrong won seven consecutive editions of the race from 1999 to 2005, but they were all later stripped from him after he admitted to doping throughout his career.

There are four riders who have won the Tour de France on five occasions – Jacques Anquetil, Eddy Merckx, Bernard Hinault and Miguel Indurain. (The cleanliness of these riders has also often been called into question, but let’s not quibble.)

Do Cyclists Pee Themselves?

Harriman: Contemplate open air throughout zoning course of | Letters To...

Climbing the partitions at Jerusalem’s Tower of David

Chaffee County Draft Recreation Plan Now Out there for Suggestions Till...