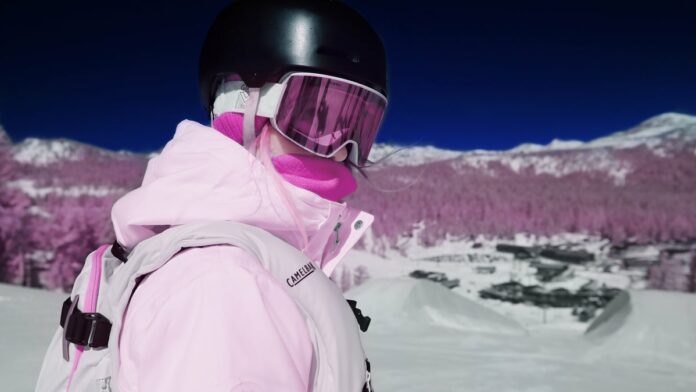 She’d been working hard, but she’d had a string of poor performances. And the hard truth is that female snowboarders usually get scrutinized way harder than men, she says, even today. Partway through the season, the team manager broke the news: they were going to have to let her go—just before the 2018 Winter Olympics. She felt like she’d been punched in the stomach.

Kalapos, 25, had been snowboarding nearly all her life, first strapping on a board at age five with help from her dad, who used to be a ski instructor. She remembers loving the sport from the minute she tried it, even though she spent that whole first day falling down. At age ten, she started competing. From then on, Kalapos worked hard, rising through the ranks and training full-time, even while putting herself through college.

But that nonstop upward trajectory came to an abrupt and devastating halt when she was dropped from the national team. After years of being part of an elite echelon of snowboarders, Kalapos suddenly felt ostracized. She was the odd woman out. All that hard work seemed to have amounted to nothing.

Doubt crept in, dark as storm clouds and hard to shake. For months, Kalapos questioned herself. She remembers thinking, “Well, this is the national team. If they don’t believe I can do it…”

Maybe you don’t have what it takes after all, her mind whispered. Day after day, she tried to push the thought away. She tried not to think about the fact that several of her male counterparts had had even worse competition results than hers and were still going to the Olympics.

“It was one of the hardest things I’ve had to overcome,” she says.

But snowboarding, like many outdoor sports, sits at a unique crossroads of community spirit and individual effort. She might have lost her team, she realized, but she still had her own unbreakable drive to succeed. And she still had her community.

“My dad came out to the halfpipe with me every day after I got kicked off the team,” Kalapos says. “I realized that if he was going to give up his time and energy to come up with me to the pipe, then he believed in me.”

For her, that was enough. Soon she started to feel her doubts transform into something different. Something that felt more like fire.

Kalapos got a private coach. She joined the Tahoe Snowboard Ski Team and dove back into training at full throttle. She felt driven and passionate about pushing her limits in a way she never had before. It showed in her results: she took home silver in the 2019 North American Cup, then notched two top-ten finishes on the 2020 World Cup circuit. In 2022, she made the U.S. Olympic team.

Walking up to the Olympic halfpipe in Beijing that winter felt like walking through a dream. “It was something I’d been working toward for nearly 20 years,” she says. “It was hard to even grasp that it was real.”

Though the experience was surreal, Kalapos says, her Olympic results weren’t what she was hoping for (she placed 17th). But learning to overcome adversity early in her career helped set her up to take the result in stride. A few bad contests are all a part of the game, she says, even in normal years. Being a snow-sports athlete can look glamorous from the outside, but like any other career, it’s full of ups and downs.

“Our season is so short, and we have to work so hard all year to perform at these five to seven contests. If you do poorly at one or at a few, it’s hard not to get down on yourself and say, ‘Oh, you really blew this.’” she says. “That’s when you have to remember why you started.”

During the lows, Kalapos thinks back to those first days on the hill with her dad. The falls, the soaked gloves, the tailbone bruises. All the little aches and pains that never for a second interfered with her head-over-heels love for the sport. She remembers the feeling of freedom and grace she gets from working tricks, from carving turns in fresh snow. That’s the feeling that keeps drawing her back.

It’s also a feeling she’s passionate about sharing. Today, Kalapos works with a handful of Colorado-based nonprofits, including Duchess Rides and SOS Outreach, which work to make the slopes more accessible to girls and underprivileged kids, respectively. She also mentors young riders at the Vail Ski and Snowboard Academy.

“I’m really huge about getting young girls into the sport, because snowboarding is a predominantly male sport even now,” she says. Kalapos herself has faced a lot of barriers in her own career.

For one thing, she had only a small handful of role models growing up. She plastered her school binders and notebooks with photos of Kelly Clark, Jamie Anderson, and Hannah Teter. But nearly all the snowboarding films she watched had entirely male casts. Even today, she says, representation hasn’t caught up with the number of girls who are interested in—or actively participating in—snowboarding.

“I had a previous sponsor I used to ride for, and I’d go on these trips and film shoots, and I was always the only girl there,” she says. “So I was getting invited on maybe 20 percent of these trips, and the men I knew were getting invited on so many more, filming so much more, and getting a lot more opportunity.” At the time, those snubs felt crushing. They seemed to invalidate a lifetime of hard work.

For a while, Kalapos swore she’d never work with a big brand again, and instead rode mostly for women-owned businesses. That changed when she was approached by CamelBak.

“I knew CamelBak was huge in the outdoor space and in making it accessible for people to get outdoors,” she says. “But then I was looking at their athlete roster, and I saw they had all these female athletes that they support and post about. That’s big to me—they were really empowering women.”

Today, bolstered by her family, CamelBak, and a stronger team of sponsors than she’s ever had before, Kalapos feels filled with hope—both for the future of her career and for the future of the sport. With strong brand support and athlete advocacy, the gender gap in snowboarding is finally starting to close.

Still, there’s a lot of work left to do. Both that fight and her career will probably always feel like roller coasters, Kalapos says. There will always be ups and downs—moments of surreal beauty and moments of heartbreaking defeat. But amid it all, Kalapos says, she’ll keep thinking about that five-year-old girl whose dream was to be in the Olympics, and her quest to make that girl proud.

Zoe’s Favorite Gear for Keeping Her Goals On Track

For Zoe Kalapos, staying hydrated, fueled, and organized is all part of maintaining focus ahead of big competitions. Here are three of her top gear picks for keeping sane and healthy in the fast lane.

Founded in 1989, CamelBak invented hands-free hydration and is the global leader in personal hydration gear. CamelBak is fulfilling its mission to continually reinvent and forever change the way people stay hydrated and perform by offering a combination of award-winning products that include everything from technical hydration packs to reusable bottles.

Out of doors consignment store opening in Rochester

Windsor-Essex well being unit stands by restrictions on outside recreation