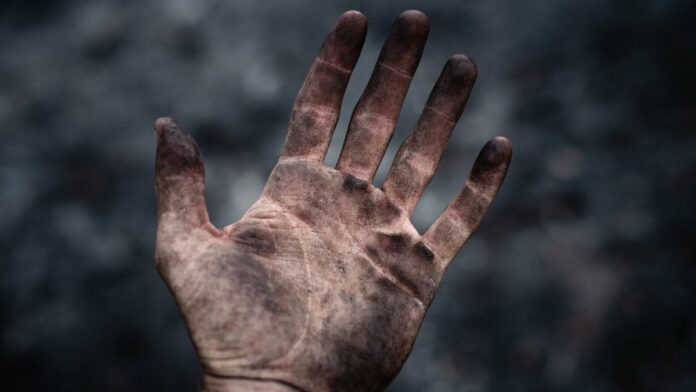 My first lap on Colorado’s Dirty Bismark Trail after the Marshall Fire tore through it on December 30, 2021, took place on a sun-soaked, windy morning, eerily similar to the day of the blaze. As I passed through the first trailhead gate, I was flooded with anxious anticipation mixed with fear of what I’d see—or not see. But seven miles into my ride, as my tires first hit a section of burned trail, a sense of relief washed over me. The smell of charred trees gradually mingled with the sounds of singing birds and chirping prairie dogs, while patches of bright green grass poked up periodically. Surprisingly, it was gruesomely beautiful to see my trail in its raw form, not hidden by vegetation.

By the time the orange cones and yellow tape blocking the network’s many trailheads was removed post-fire, it’d been two anxiety- and depression-stricken months since the Marshall Fire had scorched my community—including an estimated eight of the roughly 15 miles of Dirty Bismark, my backyard trails. Even after it officially opened, it still took another month to be rideable, due to weekly snow that turned its clay into a thick, sticky mess. That equated to three months of anticipation while my mind made up its own post-apocalyptic story of what I’d see, how many fences were burned, and whether I’d ride slower to soak it all up or pedal faster to escape its emotional grasp on me.

The Dirty Bismark—named after a well-known local road ride (and race) made famous in part by the 1985 movie American Flyers—is not great. It’s not iconic. It’s not a perfectly narrow singletrack flowing joyfully through a lush forest or a sun-bathed desert. It’s not overly technical, and more than half of its roughly 15 miles are mostly mellow doubletrack. But it’s the trail I love.

Much of it burned in the Marshall Fire in December. In a tense 24 hours, the fire scorched about 6,100 acres of land, destroying 1,084 houses and seven commercial buildings, mostly in Superior and Louisville, on the outskirts of Boulder. It might seem trivial to worry about the condition of a trail amid so much devastation, but Dirty Bismark carries more weight in my life than any other trail I ride.

One of its trailheads sits a mere five-minute pedal from my house, so I’ve ridden roughly 750 miles there in the past two years. Its dry, cracking clay and flowing (albeit mellow) downhill sections, along with its overgrown shoulder-high grasses and mile of jarring baby heads have been my therapist, my race-training grounds, and even my all-company-meeting boardroom. I’ve listened to countless audiobooks as I mindlessly pedaled through the familiar twists and turns, taken in hours of thought-provoking podcasts, and watched the sun come up over its hills more times than I can count. The trail has guided me through multiple bouts of downward spiraling during the pandemic, the death of family members, and constant uncertainties. Repeatedly, I have relied on the proper mix of nature and sport to revitalize my soul and recenter me during hard times.

I’ve loved the early-morning light that glistens off the tall grasses that are begging me to slow down or stop and take a picture; the beautiful bright pink flowers perched atop abundant cactus; the coyotes that trot across the trail, disinterested in my presence; and the free-range cows that crowd the trails, chewing their cud and leaving piles of waste in their wake.

Immediately after the fire tore through the zone, my concerns centered around the well-being of my family and our community, as well as getting gas and water back to my house (which thankfully had been spared), but I slowly started to realize that I was missing a key coping mechanism to deal with the trauma of the fire. With my main therapeutic outlet gone, I struggled to find a way to help process my emotions.

Now as I pedal in my neighborhood, my chest tightens each time I see what’s left of a nearby house: a solitary air-conditioner shell, the metal frame of a vehicle, or the twisted and sagging steel support beam that used to hold up someone’s home. I want to hold my breath each time I ride past charred open space sporadically dotted with yucca that are struggling to survive while fresh grass slowly transforms the landscape back to green—all of it still reeking of dusty ash. Amid all that, I’m thankful the wind didn’t push the fire farther south, chewing at more of the Dirty Bismark.

As I continue to focus my energy on supporting my friends and community members who’ve lost houses, helping my young kids recover from the trauma of evacuating and watching their town burn, as well as trying to push beyond my own heightened awareness every time the wind gusts or I hear a siren, Dirty Bismark beckons.

Every day that I see a new fire-related video online, hear about a recovered engagement ring that wasn’t reduced to ash, or navigate the insurance process for my own impacted house, I need the sanctity of my trail. Then I remember that I have it easy. I still have bikes that are more than melted frames and charred rims. I have a garage full of helmets, tools, and a repair stand. Plus I have my house—relatively unscathed and fully livable.

And I know that, like my neighbors, Mother Nature will continue to show her resilience. She’s miraculously great at regrowing, making her land beautiful again, causing us to forget that a wildfire swept through her dry prairies pushed by 100 mile-per-hour winds, and forcing us to reexamine what’s important as we collectively cope with debilitating anxieties.

Just like the blades of bright green grass starting to poke through the blackened earth, I find myself healing as time passes. Being back on the Dirty Bismark lifted a tension I’d been carrying since December. During the three months I anxiously waited to ride, I unknowingly became more mentally prepared for what I would (or wouldn’t) see. It’s still hard to drive by flattened neighborhoods, see people picking through their belongings, and watch excavators claw through what’s left of a house. But as the land restores itself, our community will continue its own restoration process. And my mellow backyard trail will surely play a role in that.